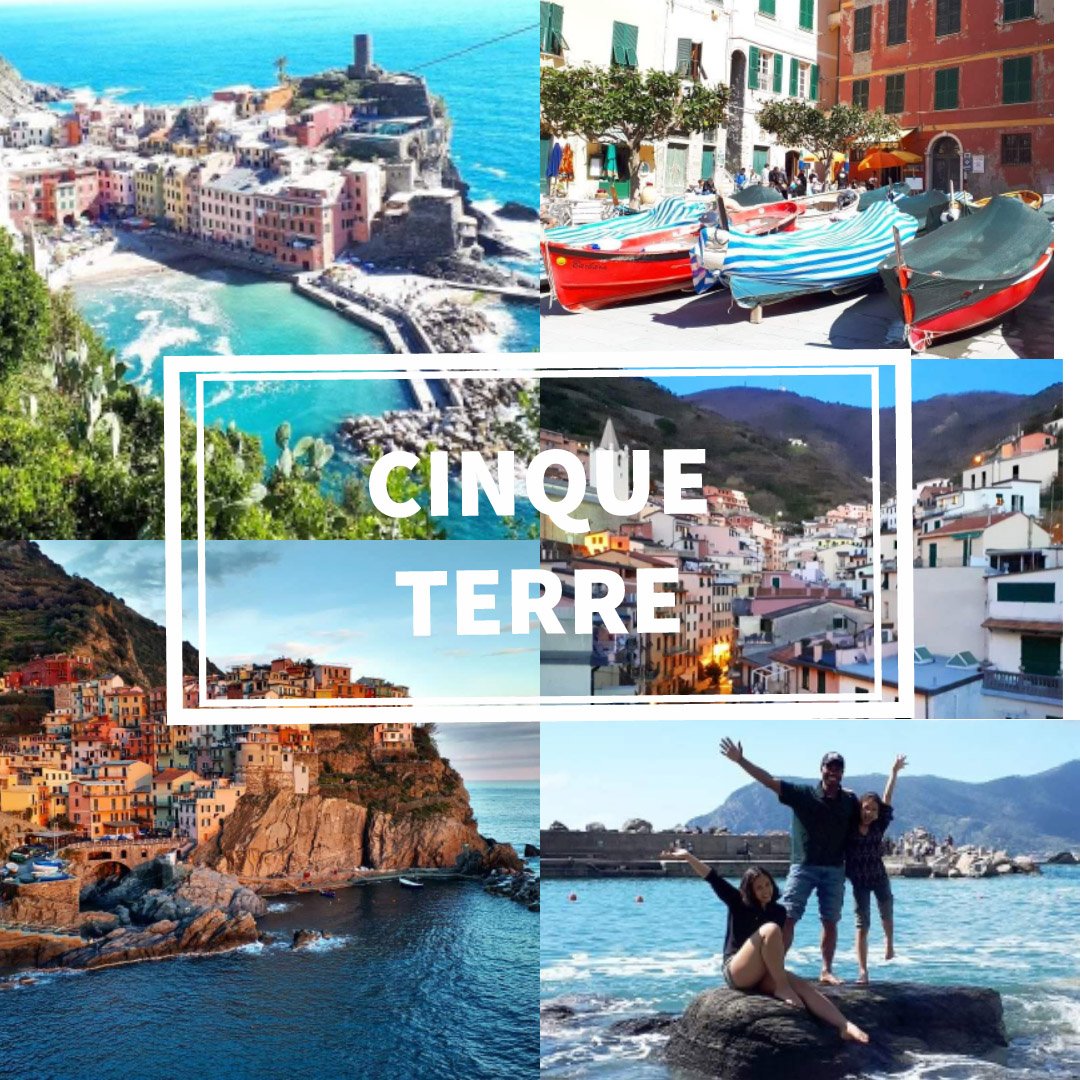 With an 8 hour drive ahead of us to Cinque Terre, we hit the road early from Sorrento, especially since we planned to make a pit stop at Pisa along the way. Making Pisa a pit stop was the right call, as there wasn’t much to see other than the Leaning Tower of Pisa. 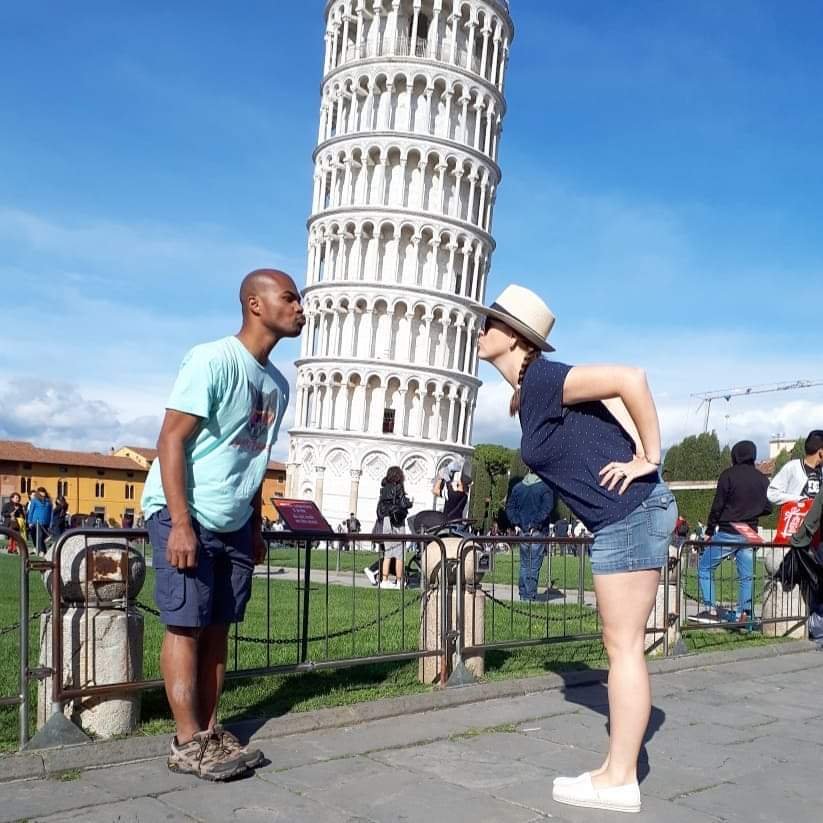 The 12th Century tower leans at just under a four degree tilt and has survived several earthquakes. Once there, you will find hordes of tourists doing the obligatory leaning pose opposite of the tower. You’ll find an equal amount of merchants pedaling key chains, t-shirts, and many other trinkets. Unfortunately, the town itself isn’t very appealing, and the tower is located in (at least what looks like) a fairly abandoned part of town. It’s definitely worth the pit stop, but not the stay. 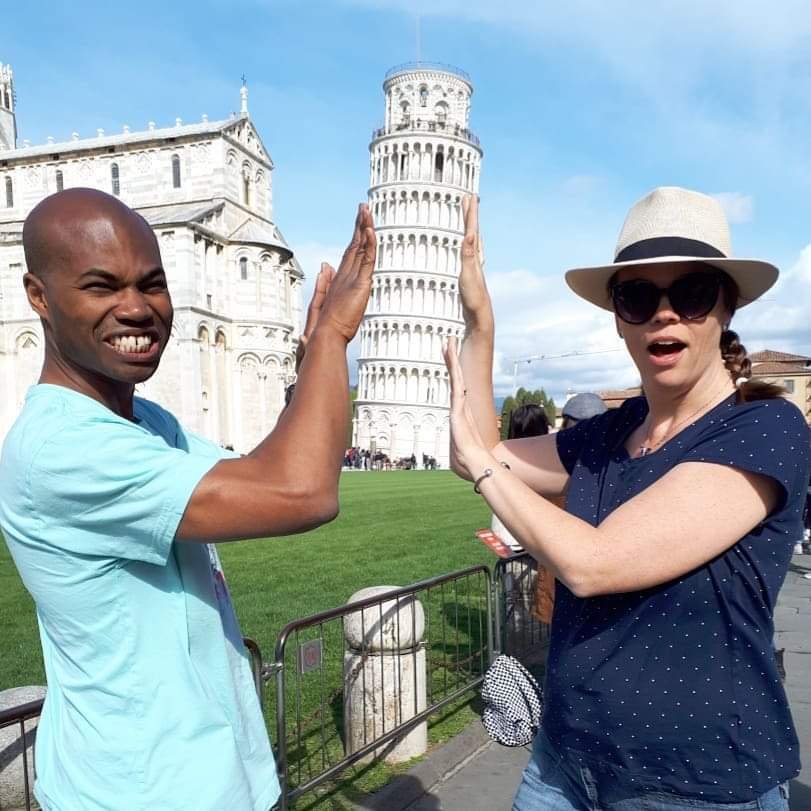 After about an hour at Pisa, it was time to head on to our next destination. We rented an apartment in the Cinque Terre village of Riomaggiore, but the only way to access it was through the train station at La Spezia. Driving in Cinque Terre is near impossible, so our apartment host advised us to park and to take a train ride in. Parking was only €18 a day, and the train to Riomaggiore was under 10 minutes. 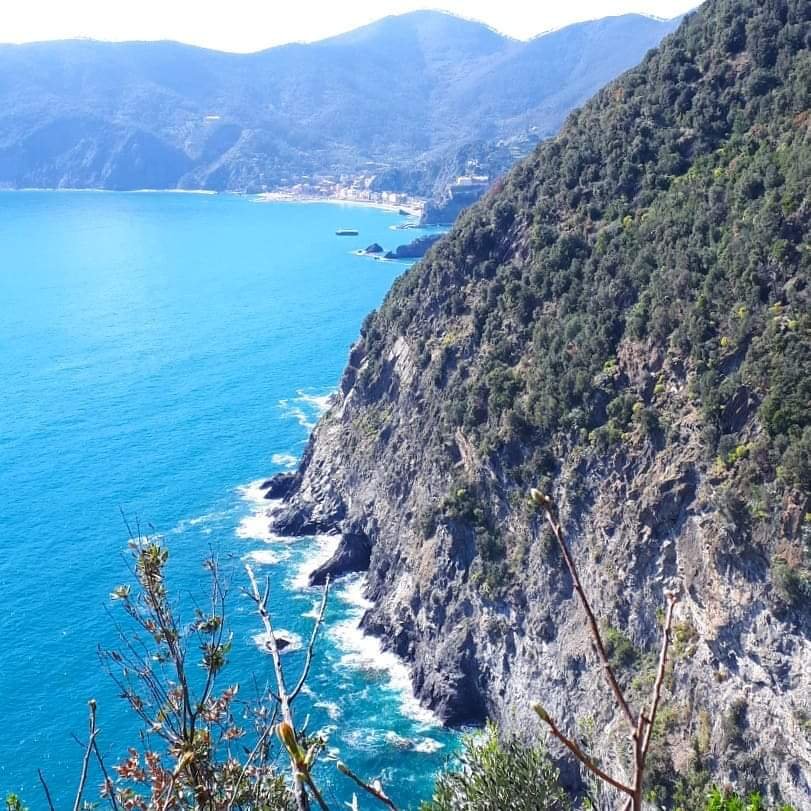 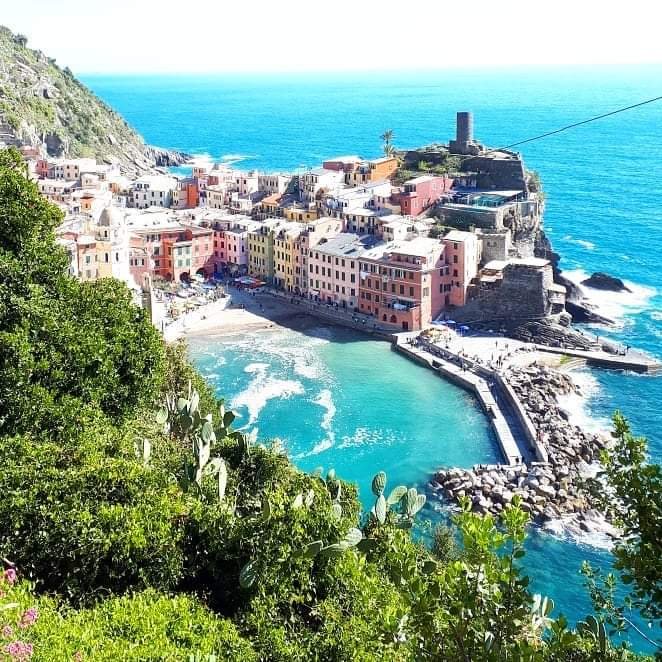 Cinque Terre (Five Lands in English) consists of five villages that are part of the Cinque Terre National Park, a UNESCO World Heritage Site. The region runs along Italy’s northern coast, and it is popular for tourists to see the terraces built into cliffs and breathtaking hillsides overlooking the sea. The regions five villages, from east to west, are Riomaggiore, Manarola, Corniglia, Vernazza, and Monterosso al Mare. Perhaps the most picturesque is Manarola, but the touristiest is Monterosso al Mare. Travelers can stay in any village, but many choose the cheaper option of staying in La Spezia or other surrounding villages. The villages connect through hiking trails and a rail line along the coast. 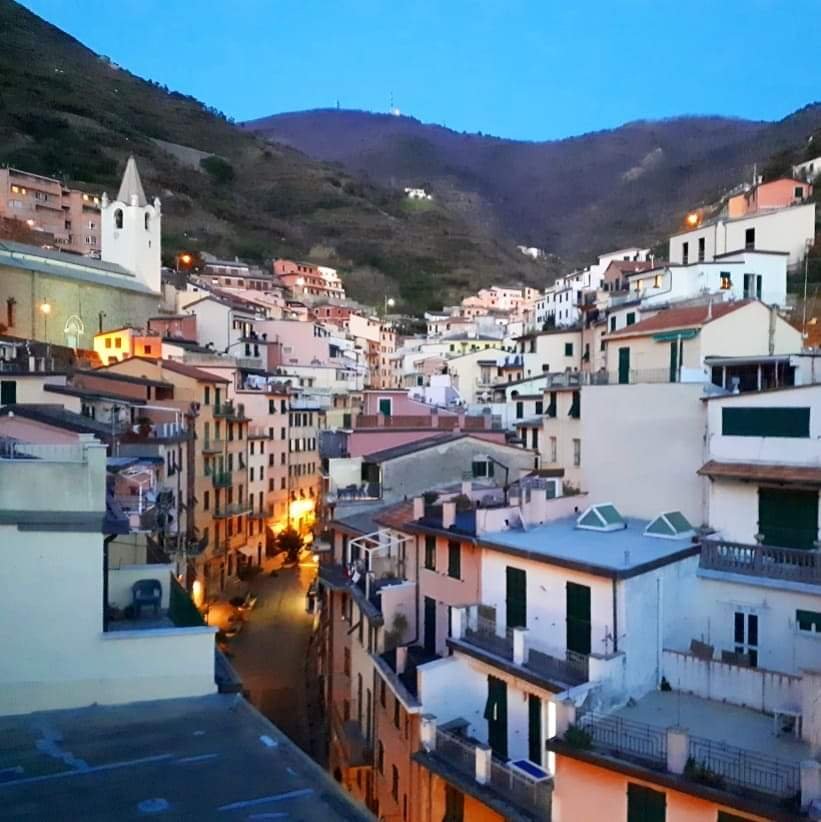 Riomaggiore is the first village from La Spezia. It’s a small village with a small rocky beach, and it appeared to nearly shut down after 10pm each night. We found after 10pm to be a perfect time to sit on the rooftop and sip wine. There are plenty of places to eat in the village, but Veciu Muin quickly became our favorite. We proved it by eating there three times, including the night we arrived. 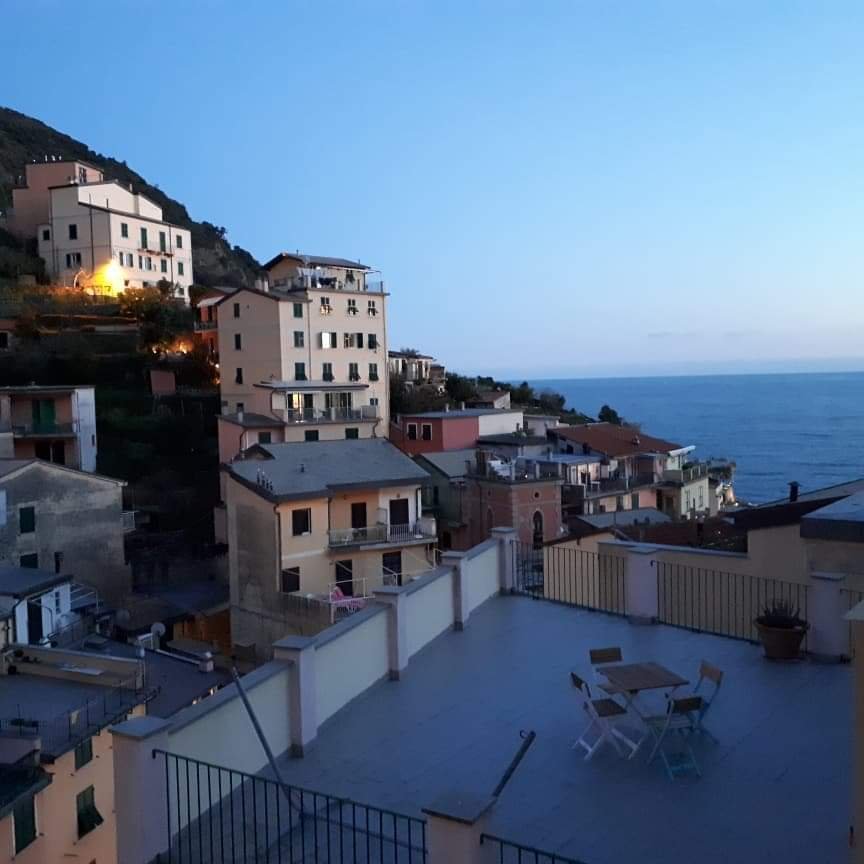 We used Booking.com to book an apartment listed as Tra Terra e Mare, paying €380 total for three nights. The apartment lived up to it’s 9.3 star reputation as it was spacious for our family of five, and the rooftop terrace had an amazing view of the sea. The apartment host, Chiara, was flexible in meeting us and gave us a quick tour. One of my favorite parts about the apartment was the easy access to everything. It took us under a minute to walk to nearby restaurants, under five minutes to walk to the beach, and 10 minutes to walk to the train station. 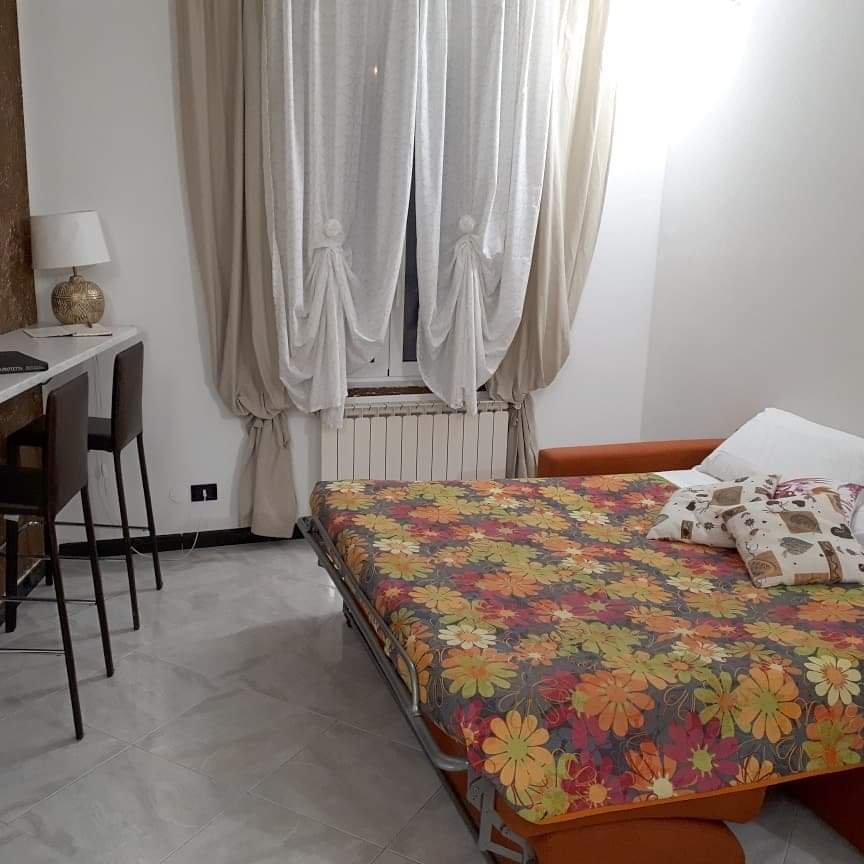 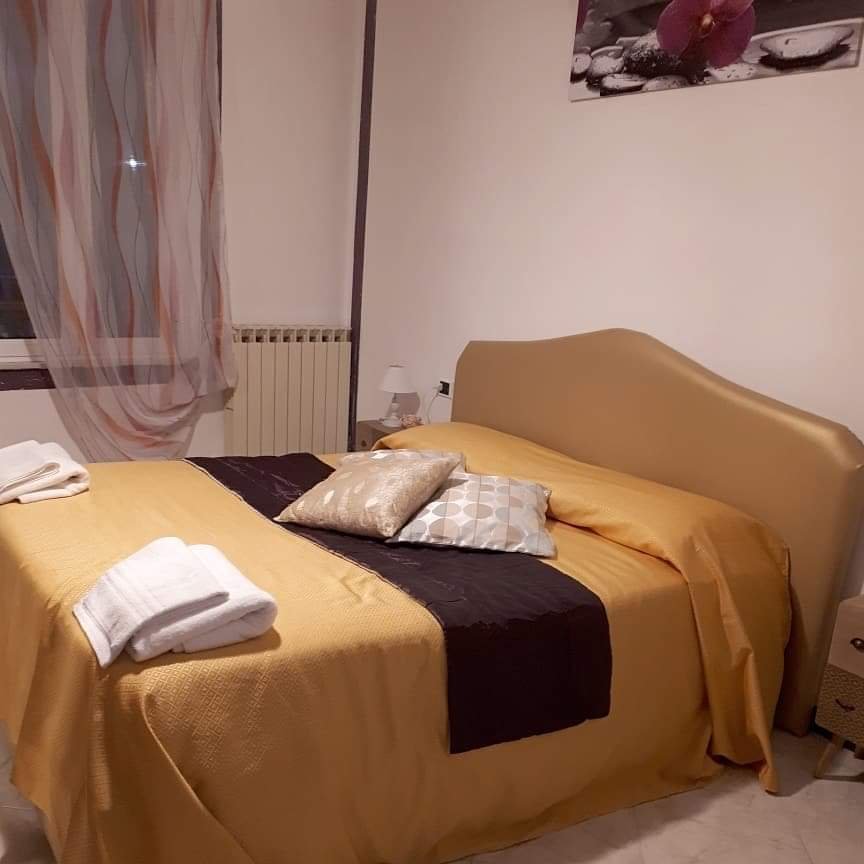 For Day 2, we decided to see how to explore all five villages of Cinque Terre. We walked to Riomaggiore’s tourist information center, which we found located adjacent to the train station. We purchased the reasonably priced Cinque Terre card, which gave one-day access to the region’s hiking trails and trains. The attendant informed us that most of the hiking trails connecting villages were closed due to landslides, with exception of the trail between Vernazza and Monterosso al Mare. 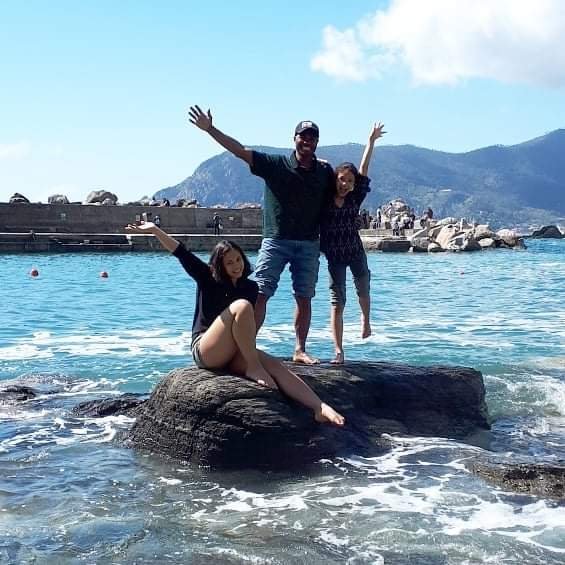 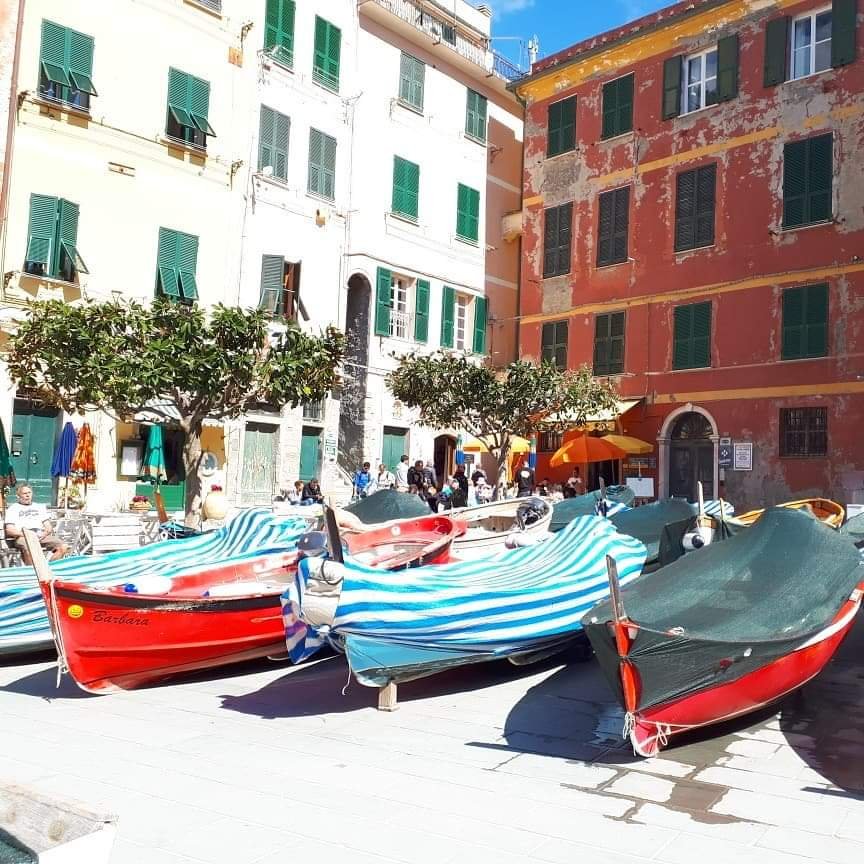 This day was about hiking and seeing, so we didn’t spend any time touring specific sites. We started by taking the train from Riomaggiore to Manarola and admired the perfect and colorful village. We then hopped on the train again to Corniglia where we grabbed a quick lunch and on to Vernazza for gelato and splashing in the sea. We spent some time getting our toes wet as we hung around the inlet beach. From there, we continued on to Monterosso al Mare via the hiking trail with gorgeous views. The hike was mildly challenging, very narrow at many points, and took us an hour and a half to hike two miles. 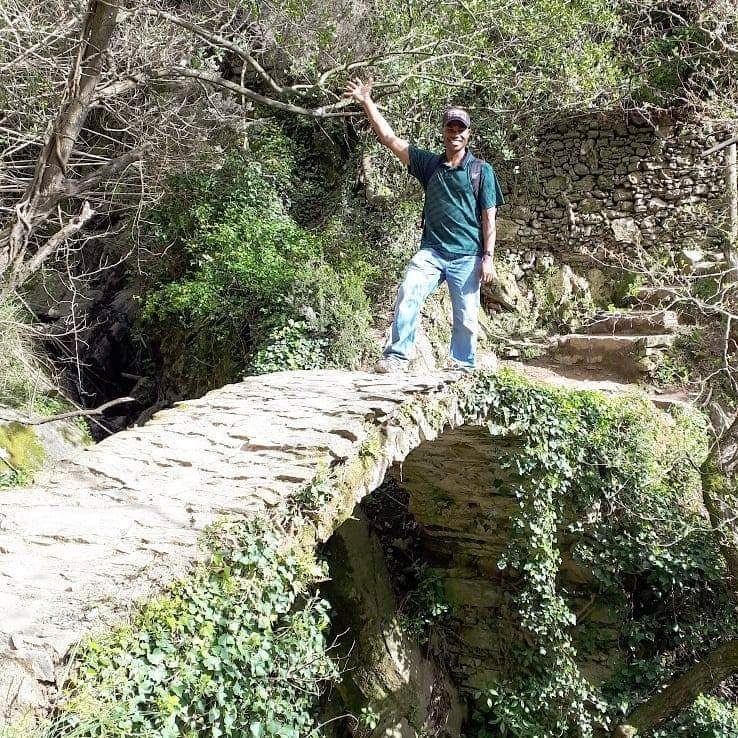 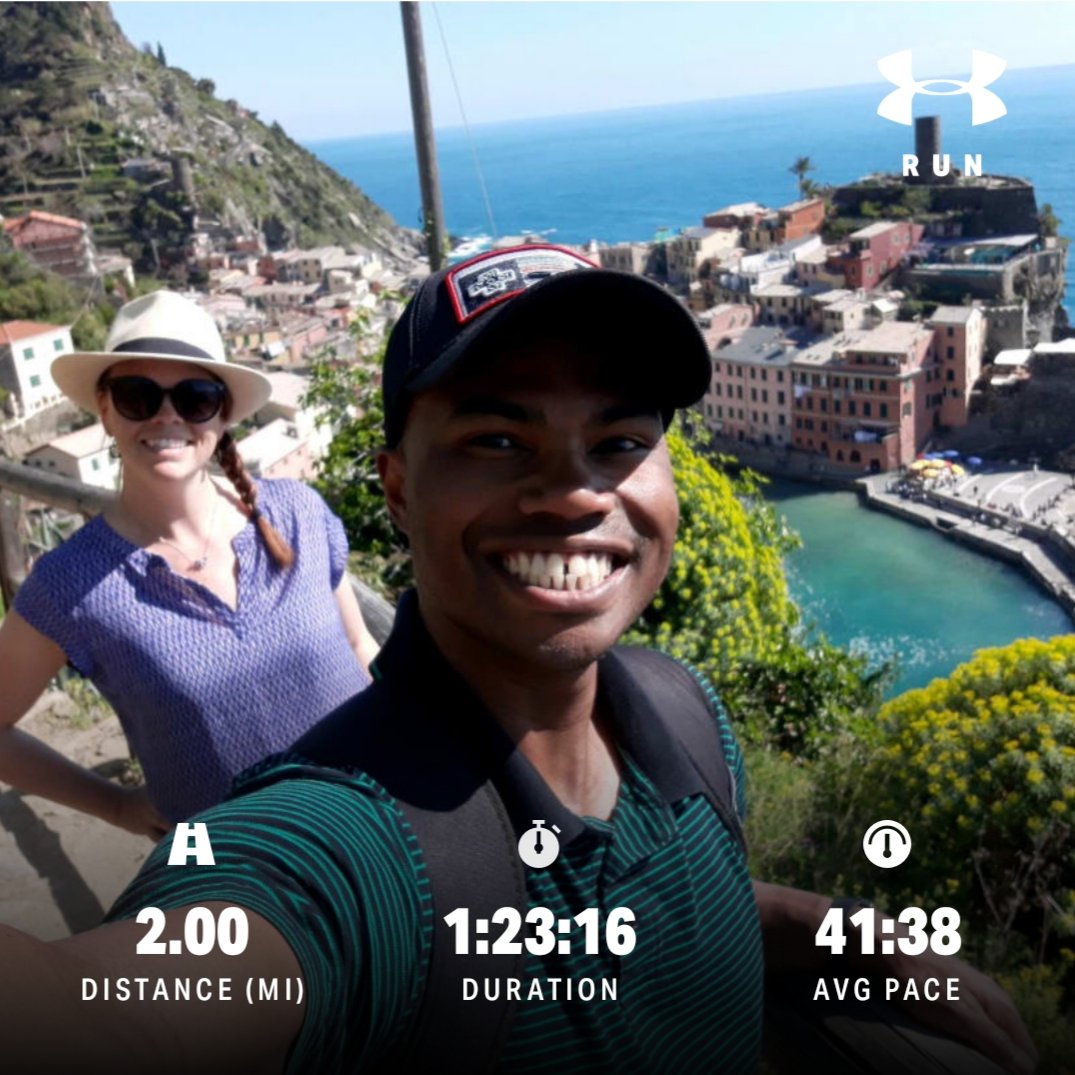 For Day 3, we decided to spend time touring the spots we found interesting from the previous day’s trip. We started off in our host village, Riomaggiore. We spent the morning sitting on the rocky beach where we practiced the art of rock balancing. We then walked to the upper village where we visited the Parish Church of Saint Giovanni. The church was founded in the 14th Century and rebuilt in the 19th Century after a collapse. From the outside, you can get some of the best views of Riomaggiore. 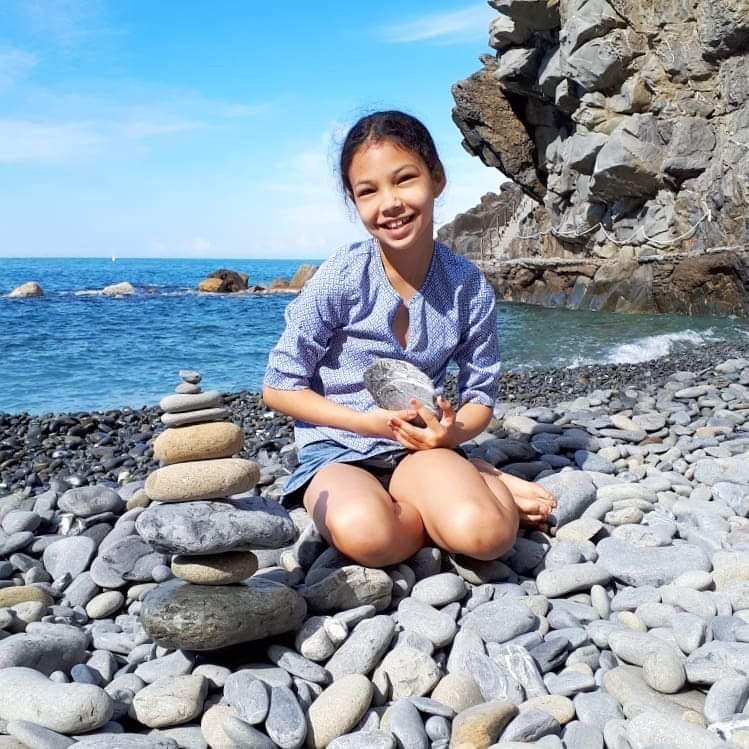 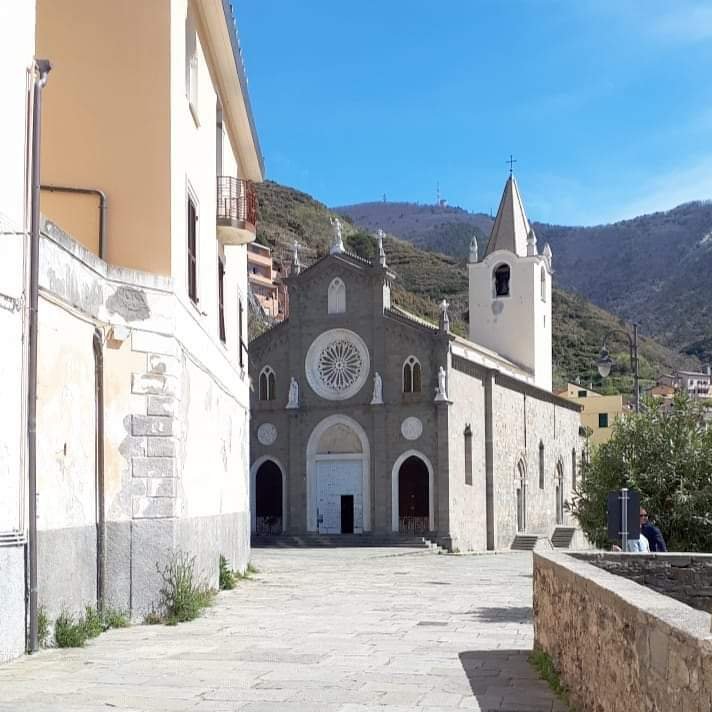 We took the train to the furthest village, Monterosso al Mare and saw the region’s prettiest and longest stretch of beach. Even though it wasn’t exactly swimming weather, there were plenty of vacationers lying out on the beach. They probably came from Germany… 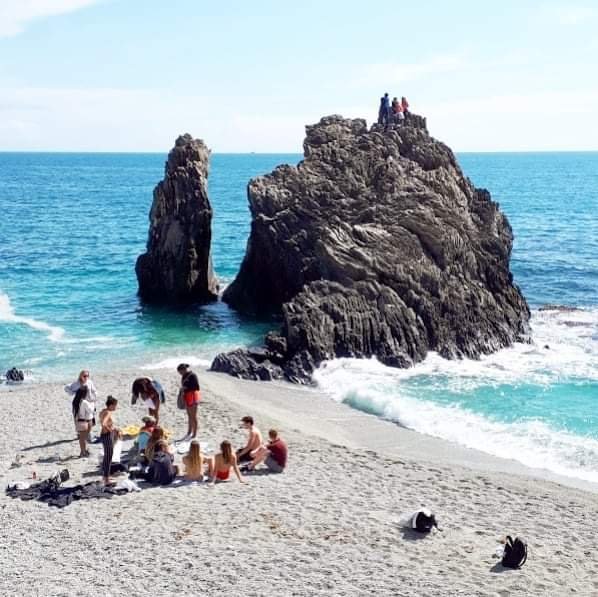 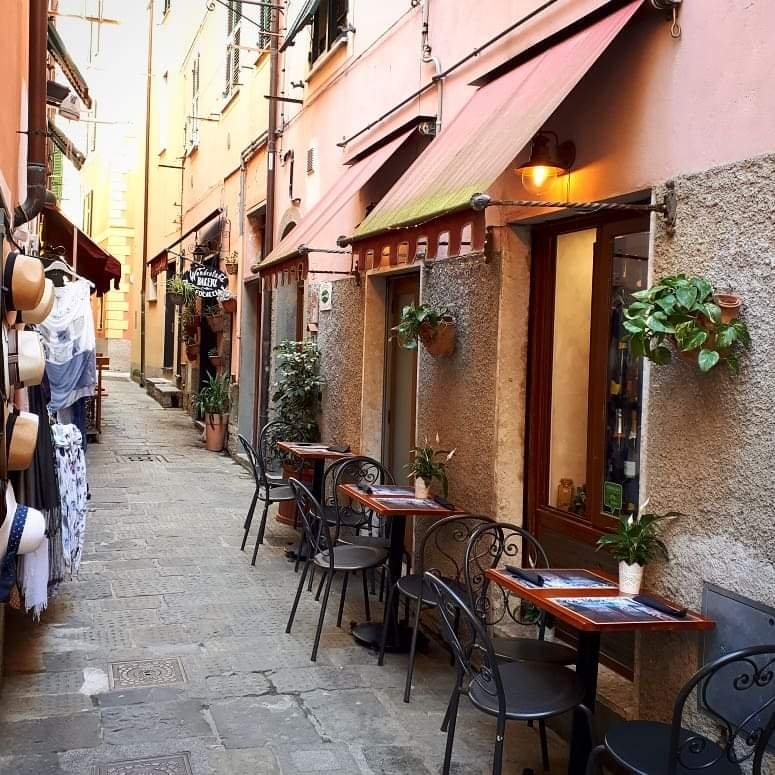 We strolled through the village and found a church that appeared to be built for zebras, the Church of San Giovanni Battista. After touring the church, we grabbed some gelato, wandered through the streets, and found a cool American rock-n-roll bar for a snack and a beer. 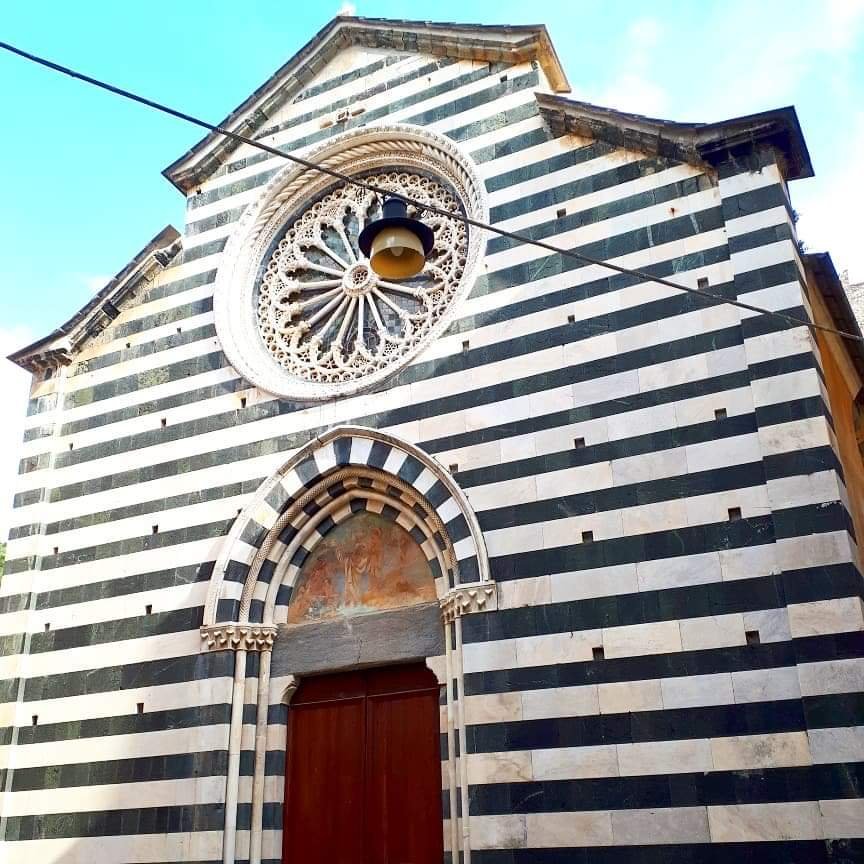 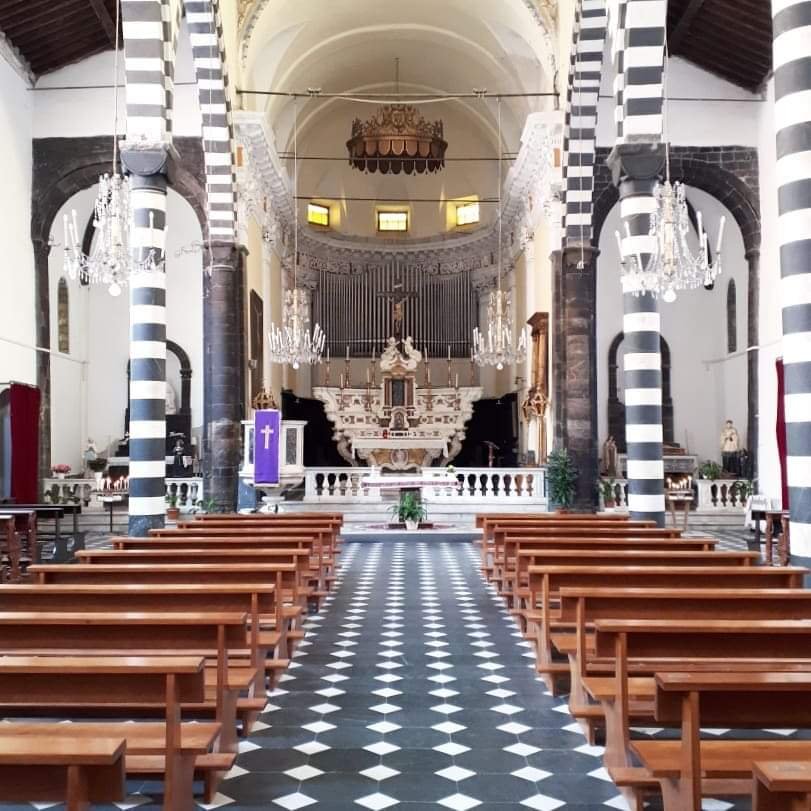 We then took the train to Manarola so we could capture the perfect sunset photo. However our first stop was the Parish Church of Saint Lorenzo. After touring the church, we headed over to the “Manarola Scenic Viewpoint” to jockey for position. If you’ve ever seen a picture of Cinque Terre, chances are that this is where the picture was taken from. We got there about an hour before sunset, which gave us plenty of time to get into position. After waiting for an hour in light drizzle, we got our own iconic photo of Cinque Terre and grabbed dinner at La Scogliera. There, we enjoyed seafood spaghetti consisting of clams, mussels, squid, and shrimp in a white wine sauce. It was perfection. 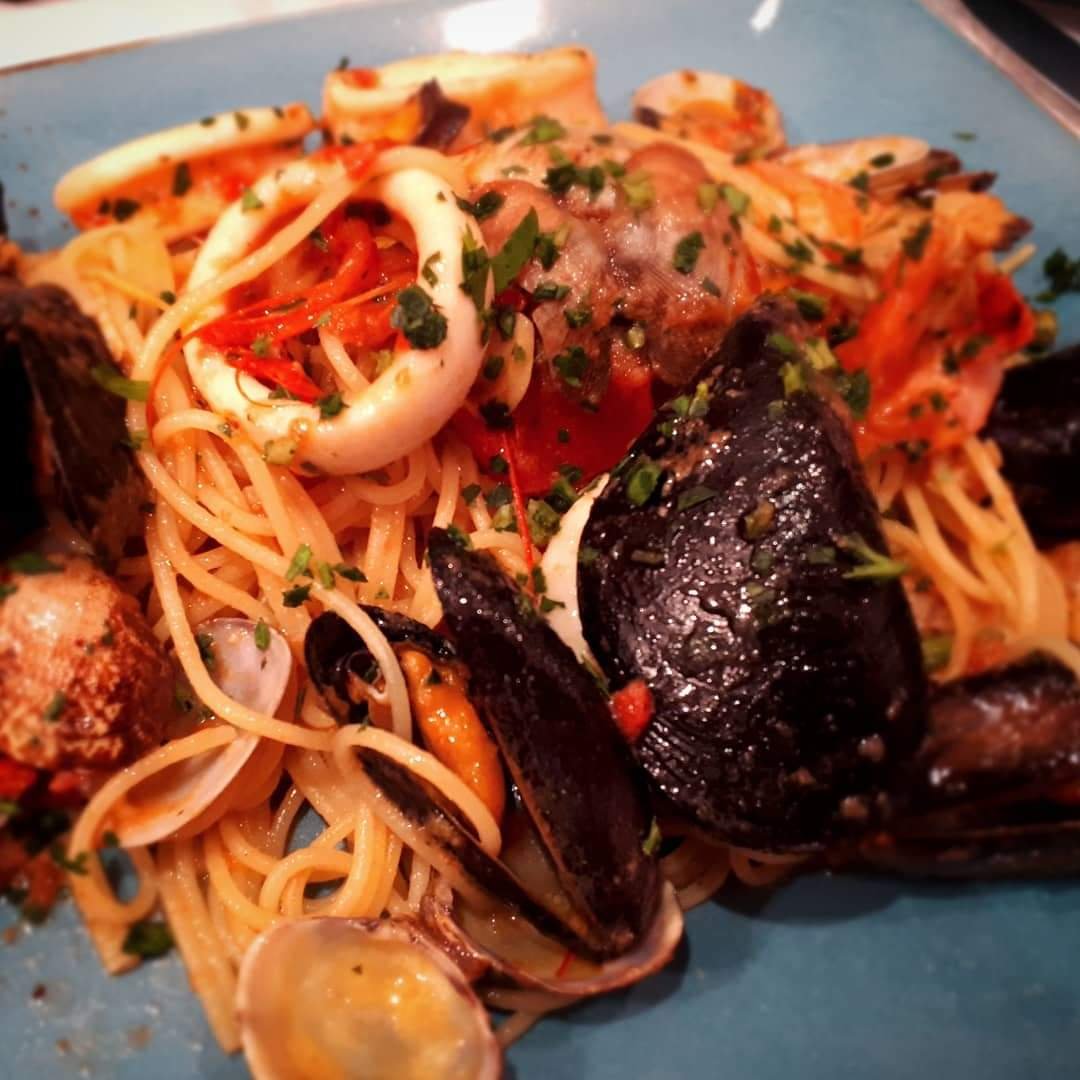 Even though there’s no place to lay your head down like home, I always hate the feeling of leaving an incredible vacation destination. After every trip, we always comfort ourselves by promising to visit again, although we almost never return. Alas, it was time to make the road trip home, but of course we had to make a pit stop along the way.

Since it was perfectly along the route, we made a last minute decision to grab lunch at Five Guys in Milan. Of course, it just so happens, we stopped in one of the fashion capitals of the world… in our road trip clothes. I’m sure we drew attention as we wandered into Versace to snap pics while wearing our redneck best. We stepped out of the mall and saw one of the most amazing structures ever built the Milan Duomo! Among the hundreds of tourists, merchants, and pigeons, we spent half an hour snapping pictures and gazing at the cathedral. It was a perfect stop for our 9 hour journey home. 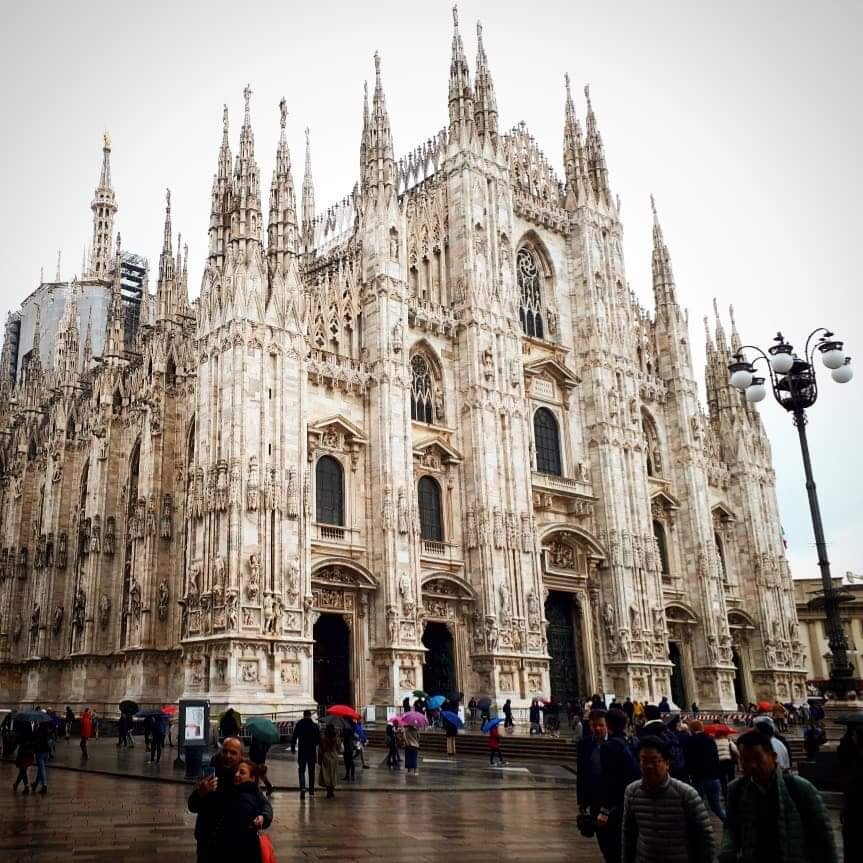 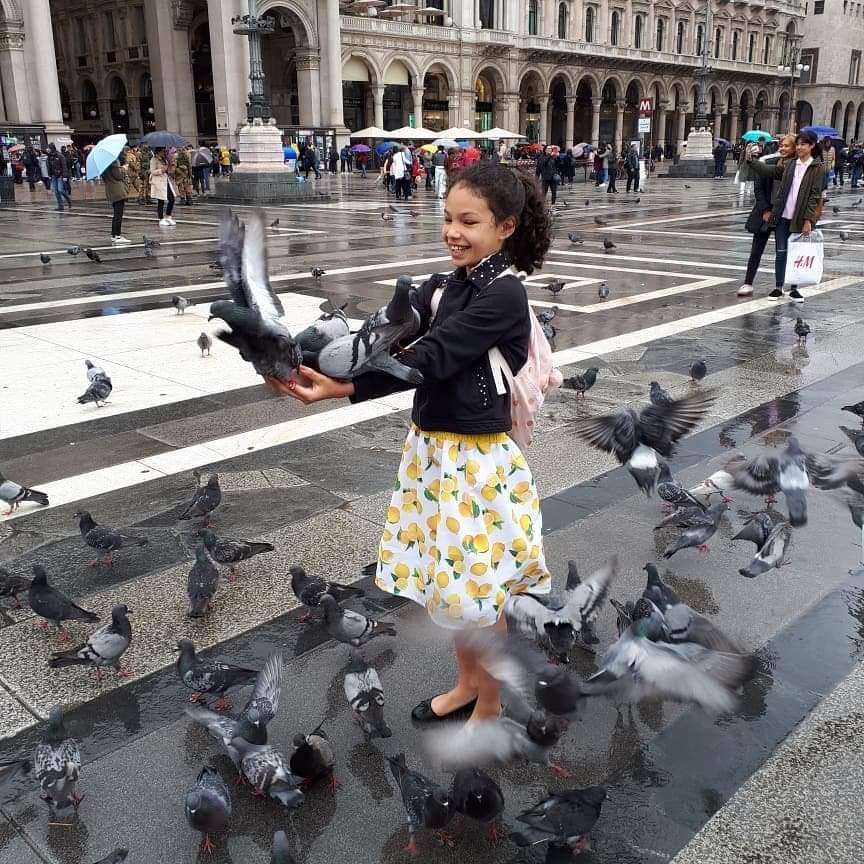 And that’s it! That’s two posts that let you in to our ultimate Italian spring break. If you’re living in Germany, Italy is always an easy escape for sunny weather and sightseeing. We look forward to sharing about trips to Venice and Rome in the future! 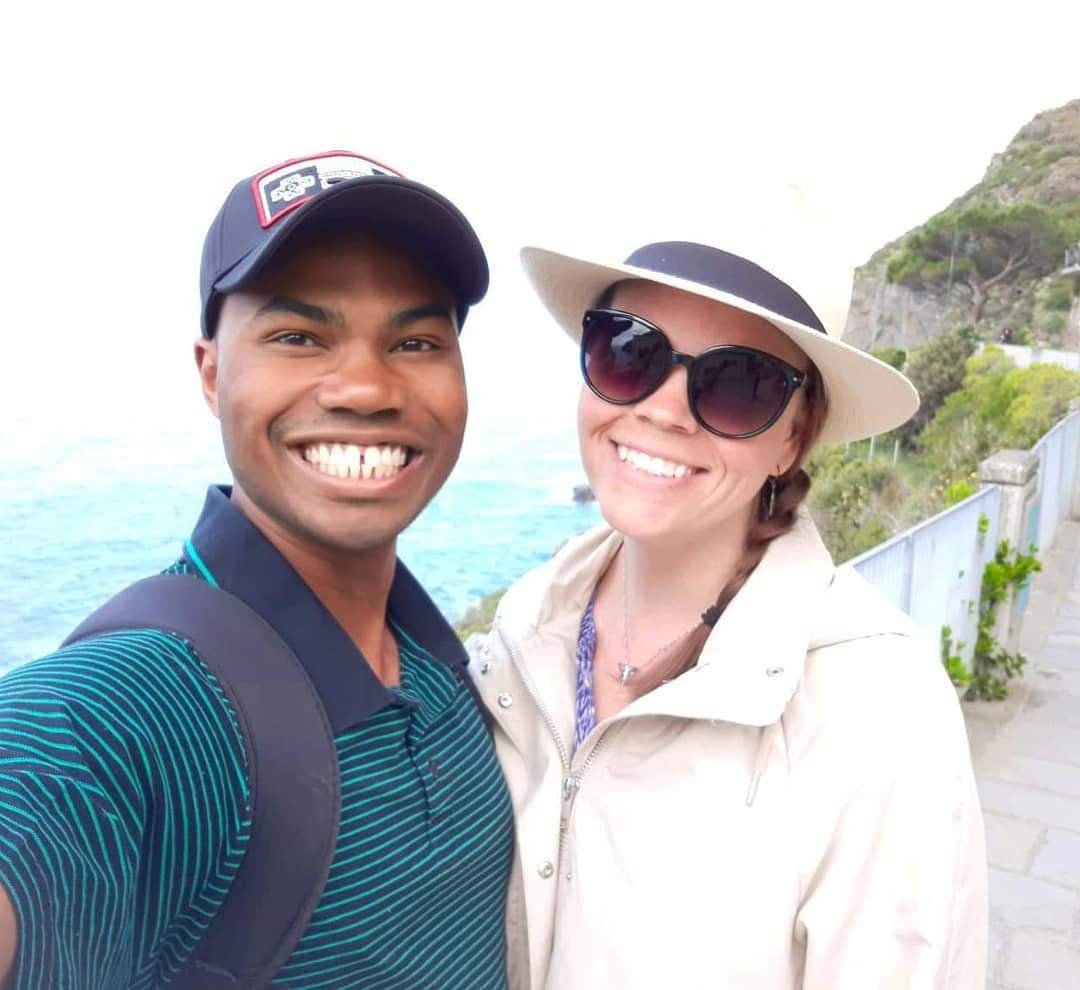