I seriously thought about canceling this Paris trip. After all, we’ve been there a dozenish times, including during the 2018 strikes. But this year was different. How were we expected to enjoy ourselves without The Metro even running? 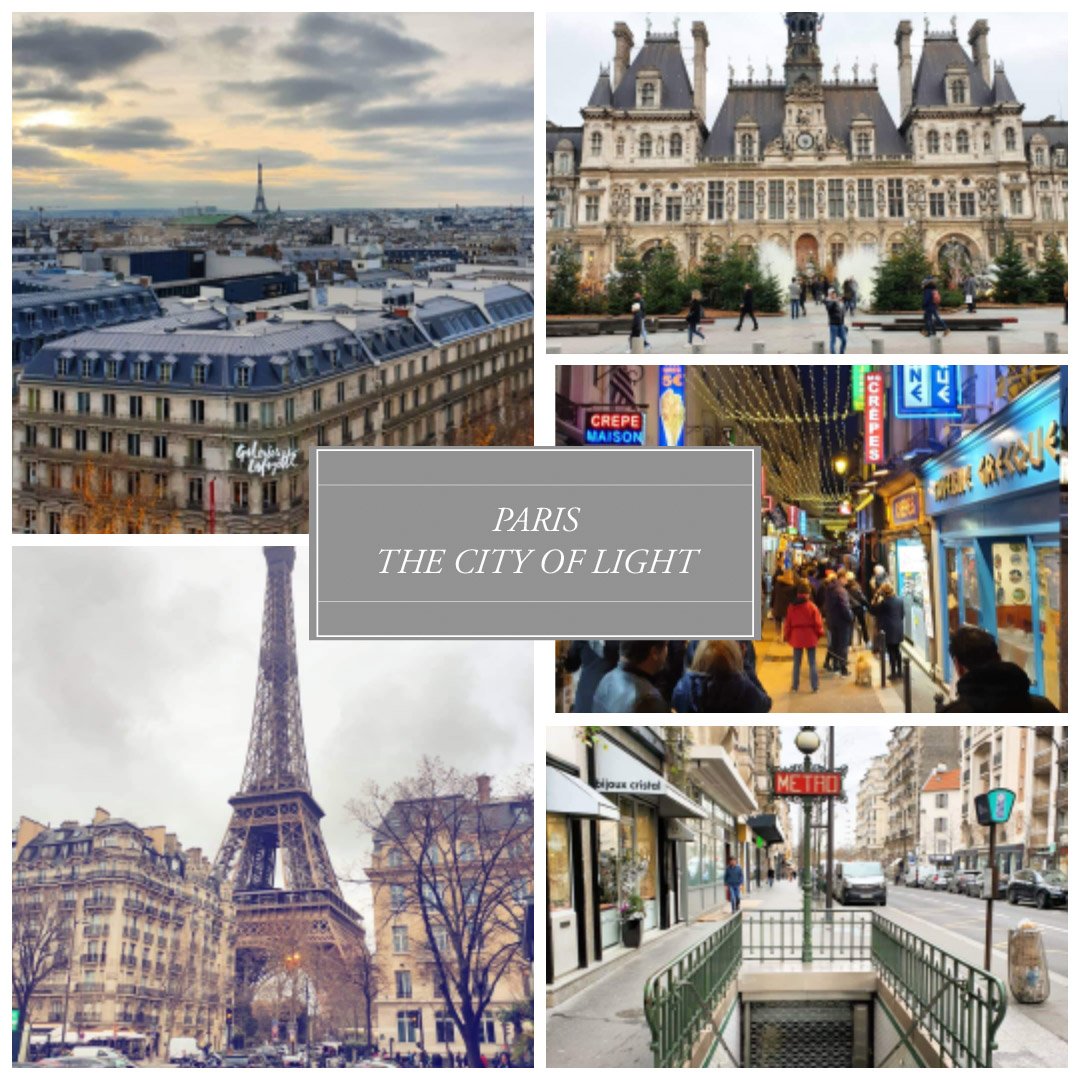 If you are wondering if a visit to Paris is doable during the strikes, rest assured that there is plenty to see on foot, and still many transportation options available. If you are on the fence about an upcoming Paris visit during the strikes, I hope this post encourages you to keep your plans and enjoy the City of Light. To help you make an itinerary for your next Paris adventure, I’ll add Google Maps and TripAdvisor links to many places we visited. 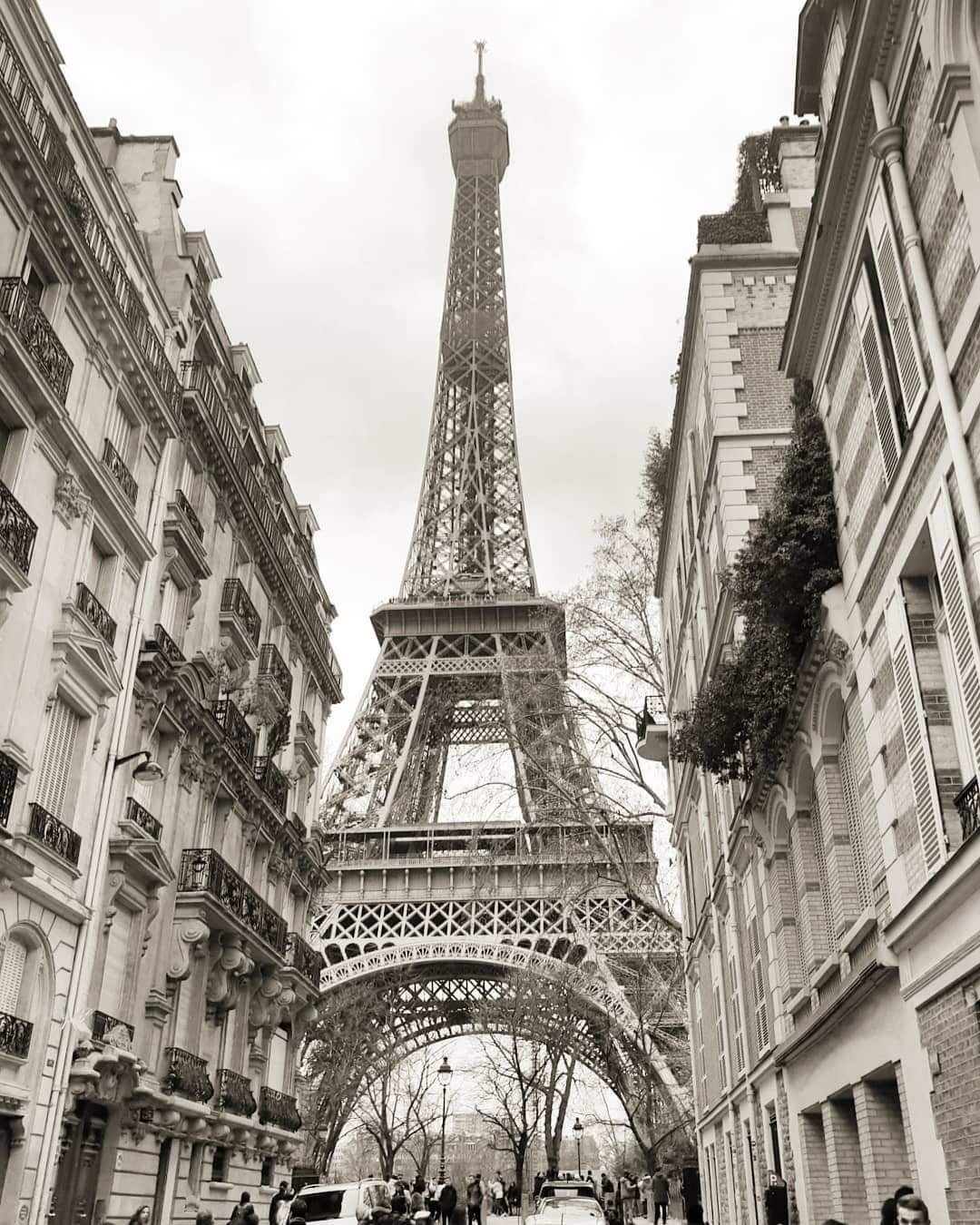 After spending hours scrolling Facebook groups for advice and consulting friends, we decided to go for it. Knowing our train from Kaiserslautern would likely be cancelled, we went ahead and made plans to make it there as a road trip.
Since one of our parents decided to visit for the 2019 holidays, we decided to only take the teenagers on this trip. We left our youngest home with her grandfather. We figured it was the best thing, since chances are that we would be doing lots of walking. 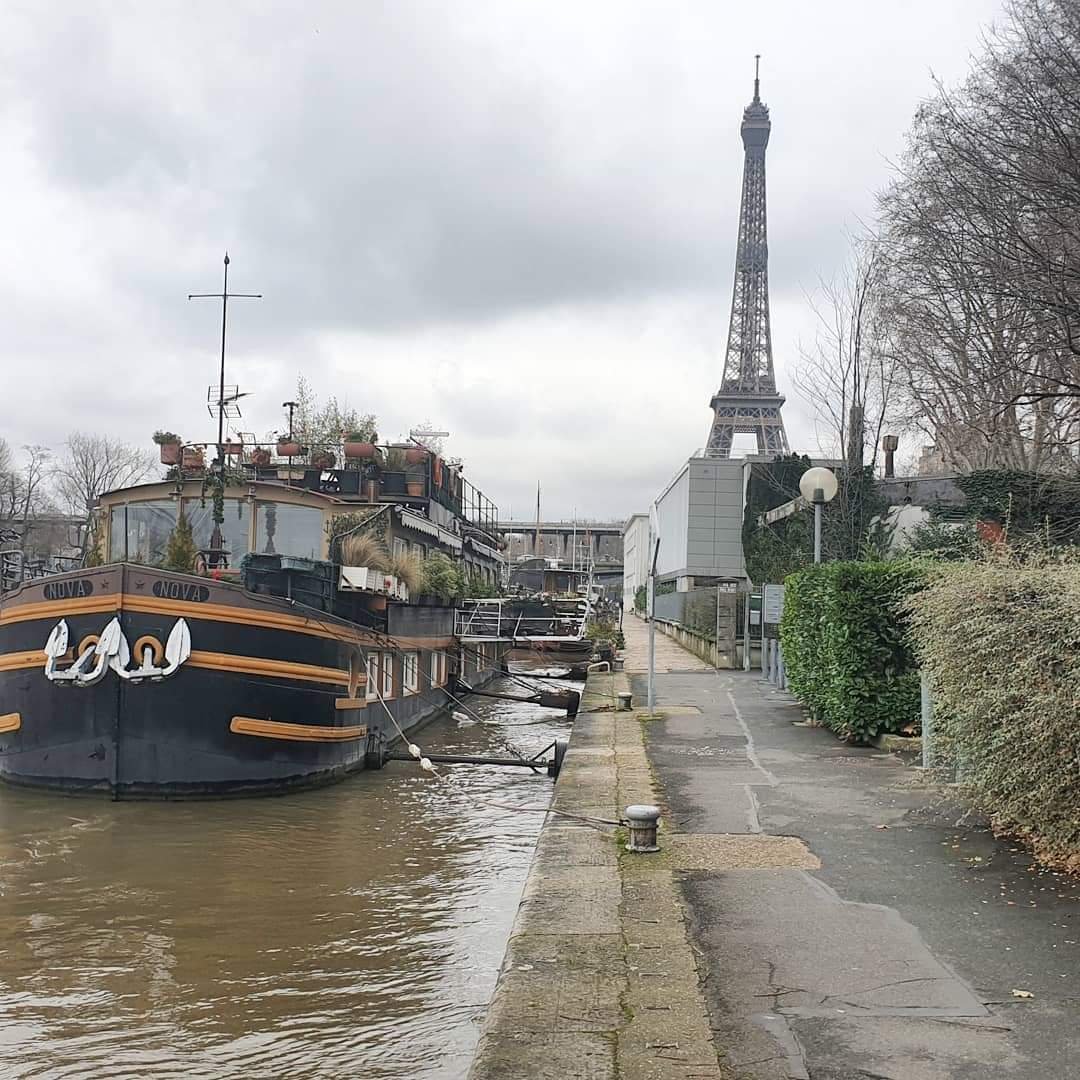 We left Kaiserslautern around 7am and arrived in Paris shortly before noon. Tolls weren’t as bad as expected, as I paid around €30 total for the drive there. As a family sponsored by the U.S. government, we pay U.S. prices for gas in Germany at Esso stations, however not outside of Germany. Even though I was only at a half tank as we entered Paris, I decided to fill up again for €50. I wouldn’t have to fill up again until we made it across the German border. We parked at a Renault Garage about a quarter mile from our hotel, only costing €18 per day.
Click here for location of Renault Garage 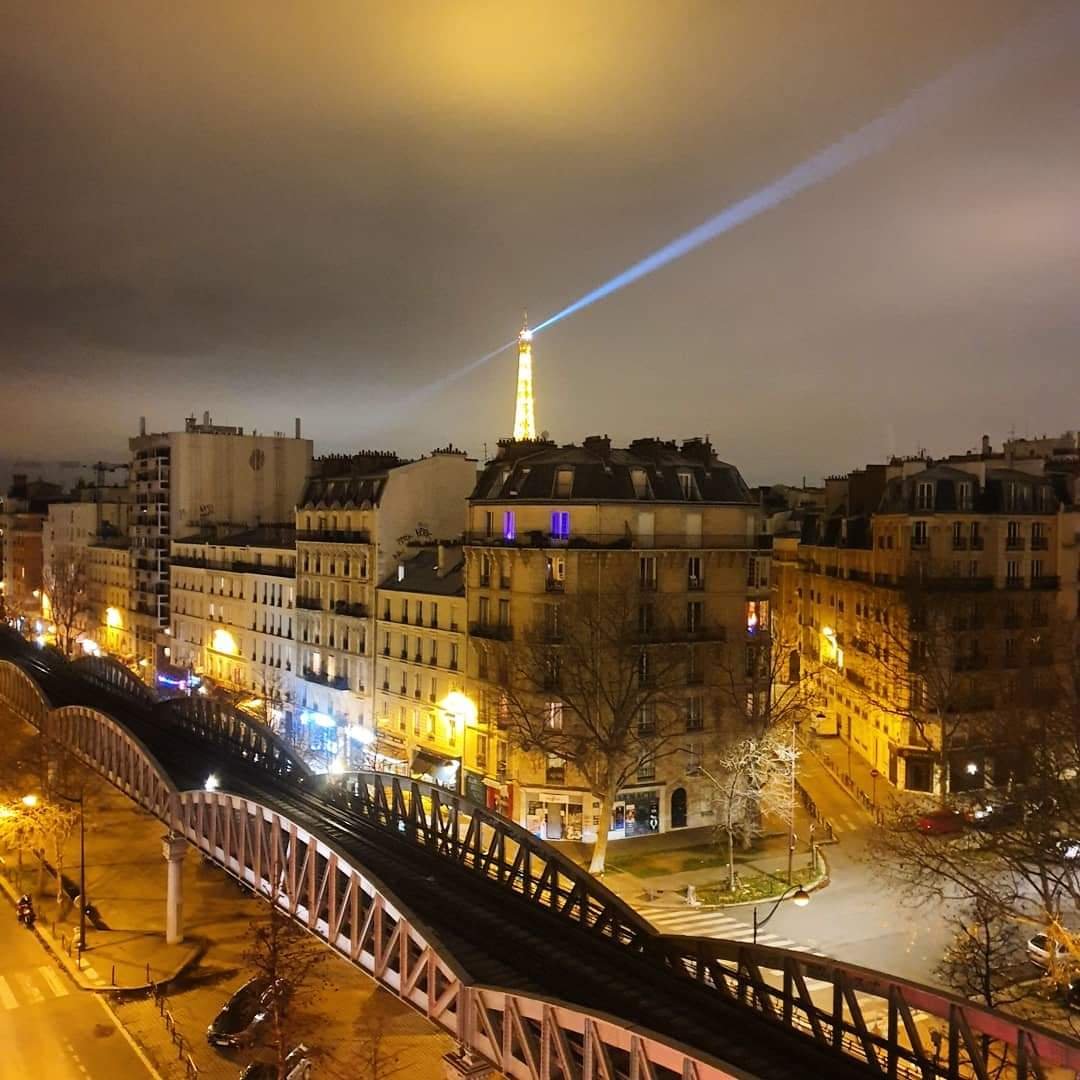 Have you ever stayed in a hotel in Paris? Yep, they are usually pretty small. Knowing this, I booked two hotel rooms for two nights, costing $400 total on Expedia. That’s $100 each night per room, which is very reasonable considering the location and Eiffel Tower view. The hotel wasn’t extravagant and the rooms were just big enough for two people, but it was probably the best location we’ve ever had in Paris. We were a 10 minute walk from the Eiffel Tower and a short Über ride to most other sights. Hotel Baldi is close to many restaurants and grocery stores, to include Monoprix.
Click here for TripAdvisor link to hotel 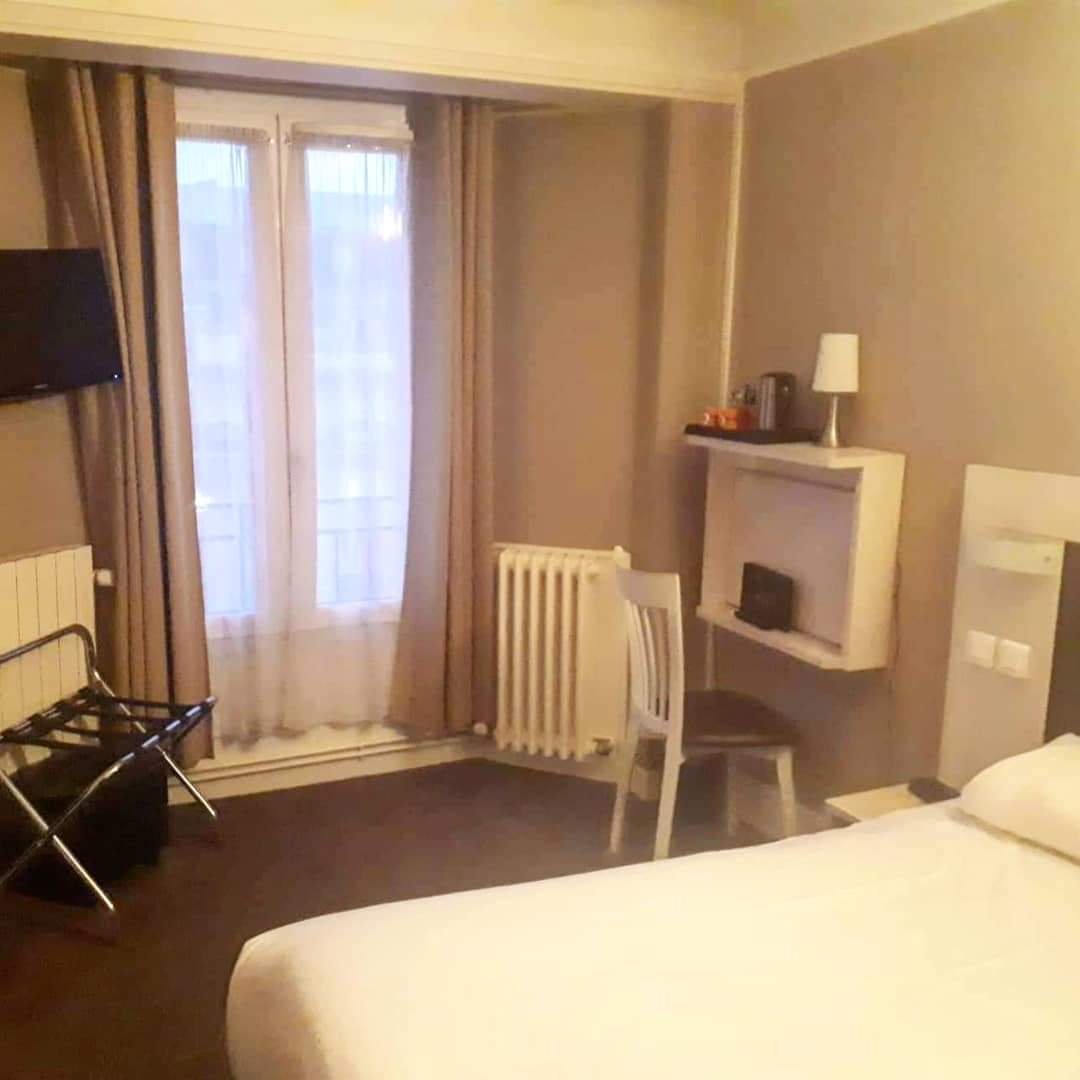 We were pretty hungry after the road trip, so after checking in, we made our way over to Chipotle to grab lunch. I know right, how American of us. But when there’s so much to see and do, the last thing we need to do is put much energy in figuring out what to eat. The Chipotle is a 10 minute walk from the hotel in a small indoor commercial center along the Seine.
Click here for location of restaurant 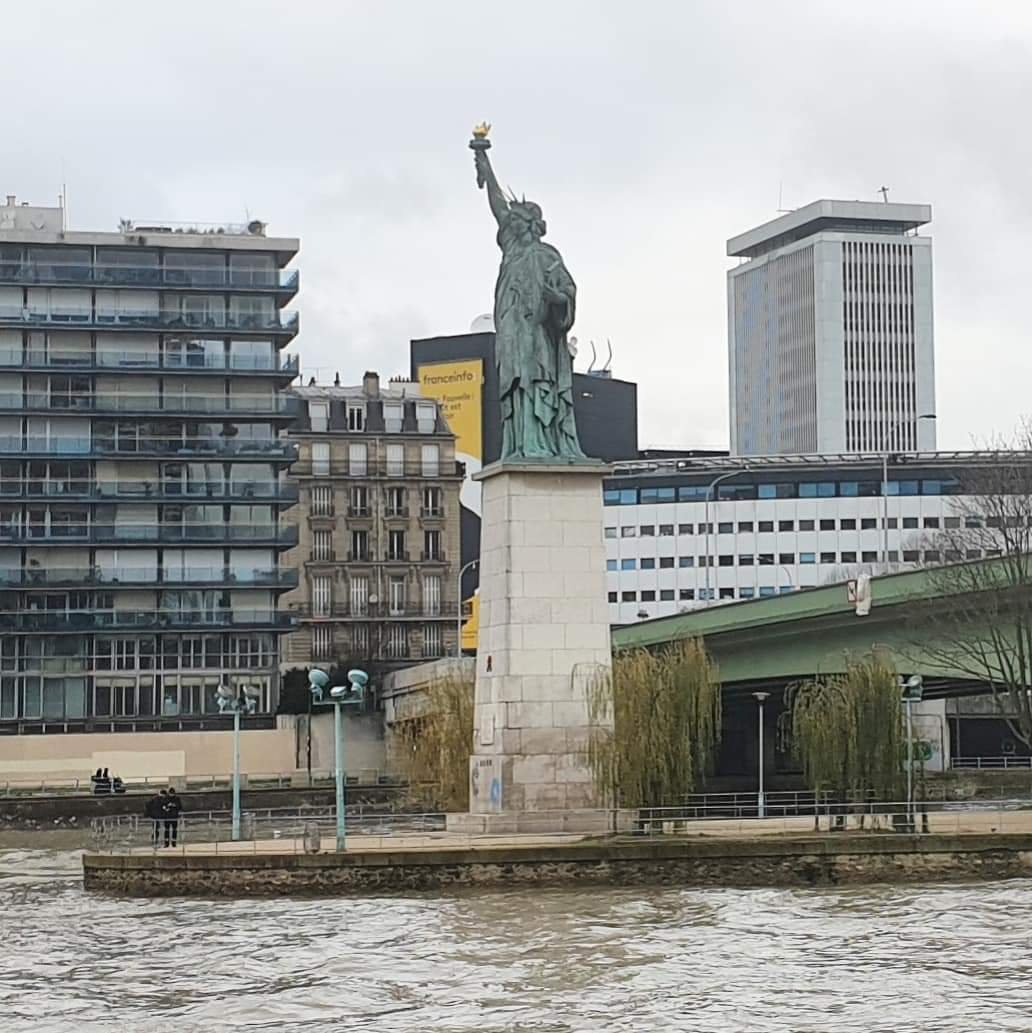 As we walked out of Chipotle we were astonished by what we saw. On a thin island on the Seine is a replica of the French gift to the United States, the Statue of Liberty Paris. We took pictures of the statue and walked along the Seine, admiring all the houseboats, and continuing towards the Eiffel Tower. 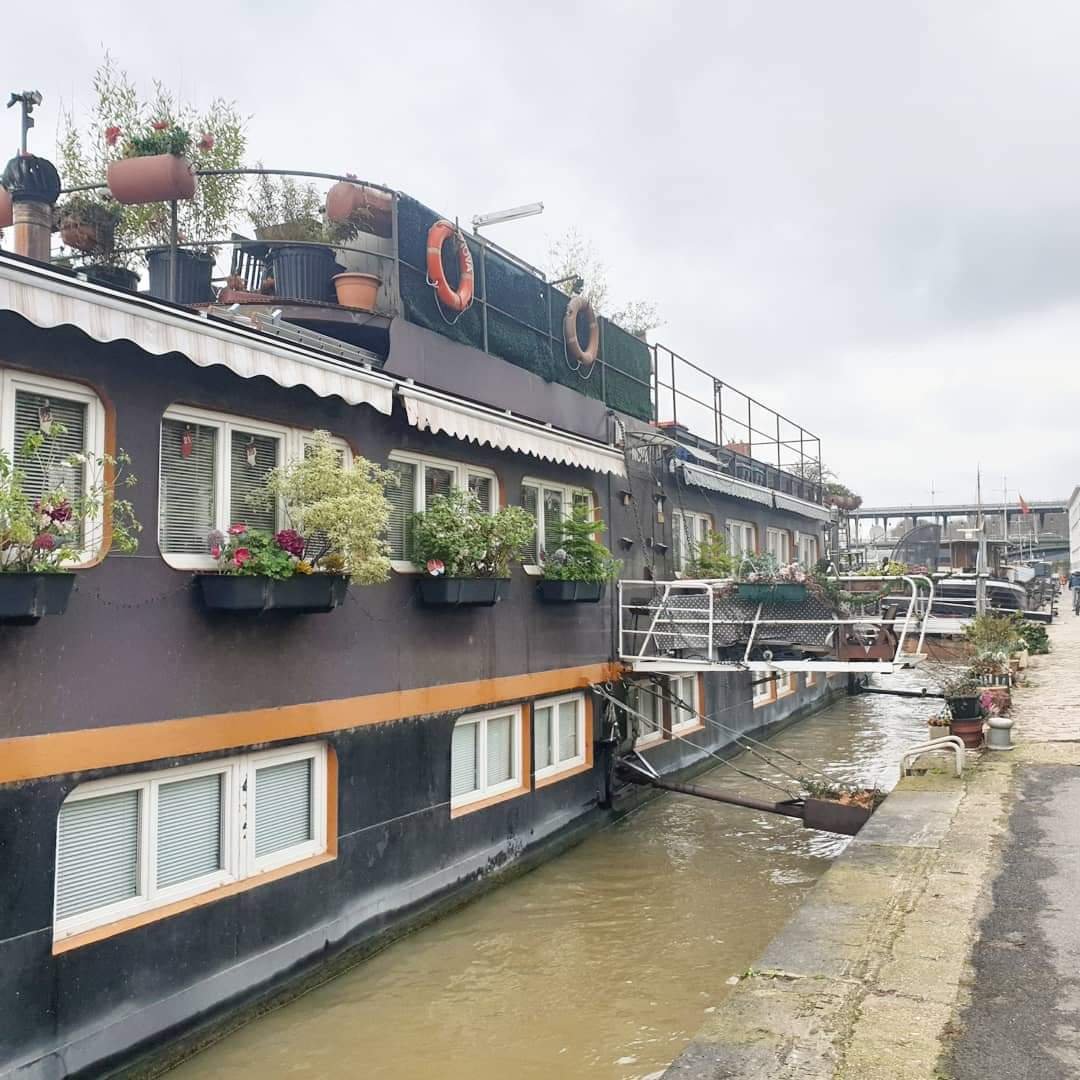 A trip to the Eiffel Tower is always our “go to” during our Paris trips. We love admiring it and the bustling atmosphere around this 19th century landmark. Admittedly, we’ve never taken a trip up to the top of the Eiffel Tower, mostly because of the massive line of tourists. But it’s always nice to take pictures from all angles, as well as relax and picnic on the Champ de Mars. After passing by the Eiffel Tower, we stopped in at a nearby cafe, Café Gustave, for cappuccino and a light snack.
Click here for TripAdvisor link to Café Gustave 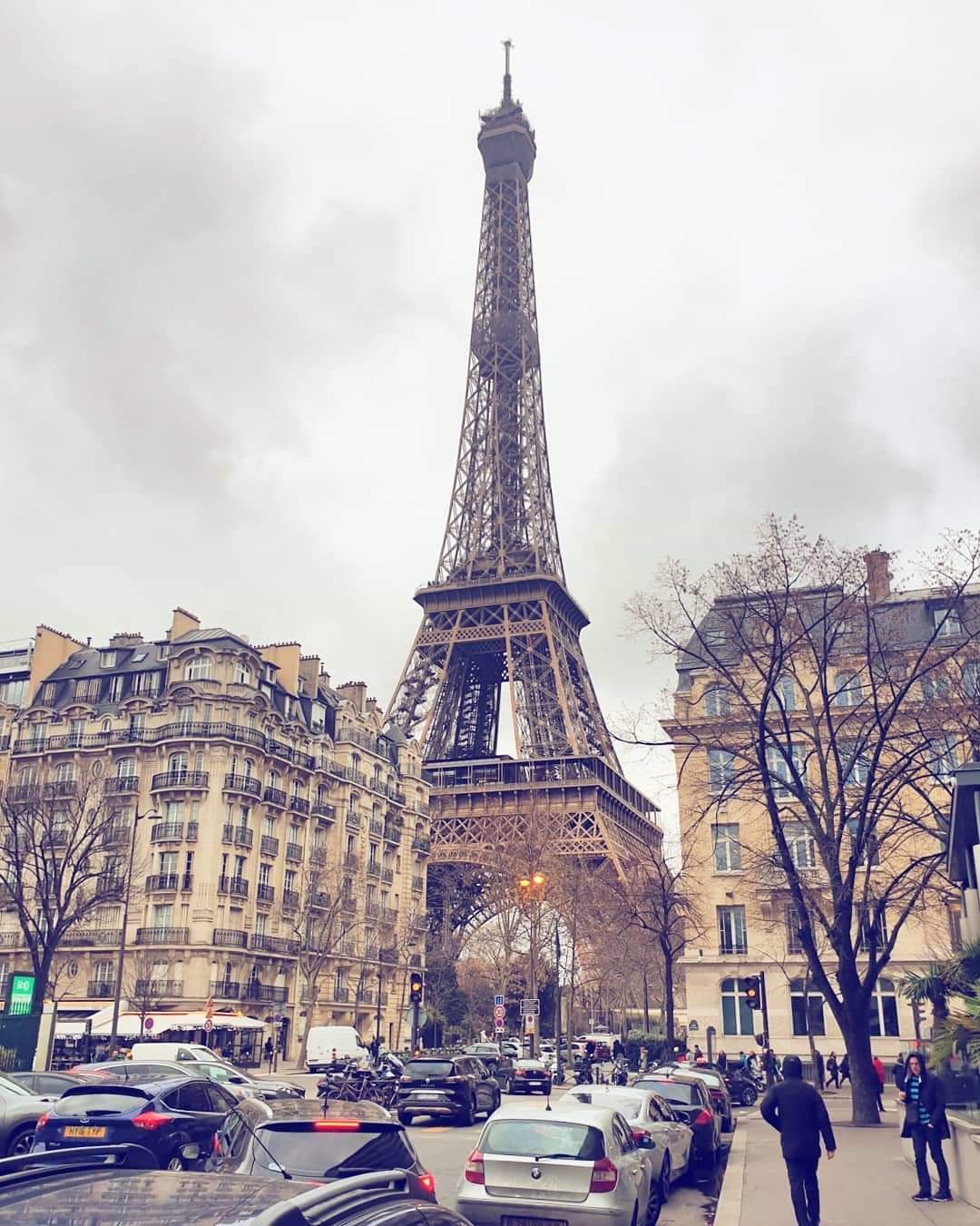 We planned this trip around the city’s Christmas Markets, especially since we enjoyed our visit there last year. The Metro is usually our “go to” for transportation, but with the strikes on going, we knew it would be quite a walk to the Tuileries Christmas Market La Magie de Nöel. Located in the Tuileries Garden, we walked 30 minutes (at least according to Google Maps) to visit the Christmas Market. Walking in Paris is never a problem, as there is always something to see in this pedestrian friendly city. 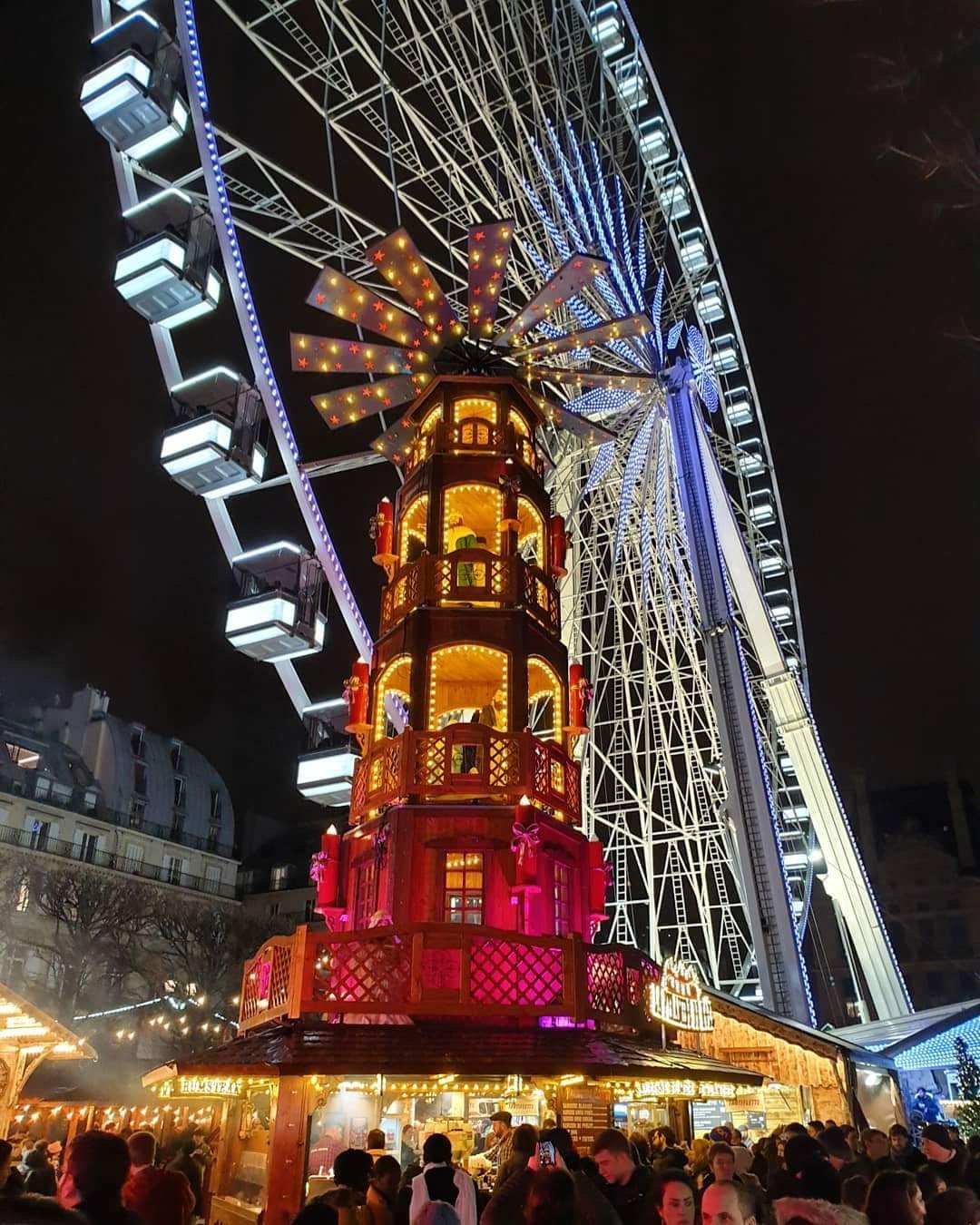 The Tuileries Christmas Market is our favorite to visit, with plenty of vendors to choose from for food and Vin Chaud. We both enjoyed seafood paella for €12 each and sipped on Vin Chaud before strolling through the market. By this time, it was already getting late so we decided to head back. Rather than take an Über back, we decided to walk along the Seine back towards the Eiffel Tower. It took about 45 minutes to make it back to Hotel Baldi, but that also included pausing for a few minutes to watch the Eiffel Tower sparkle on the hour. 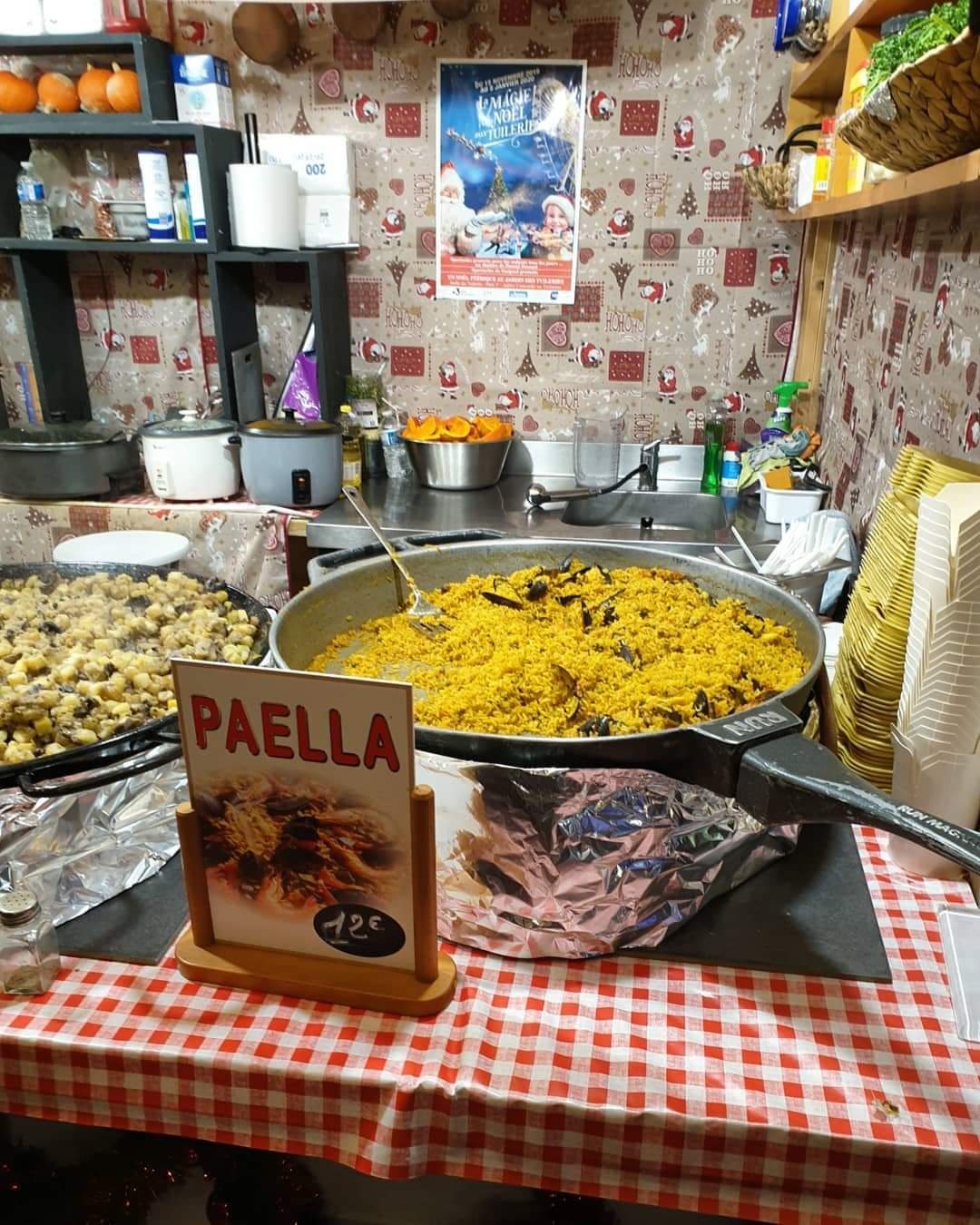 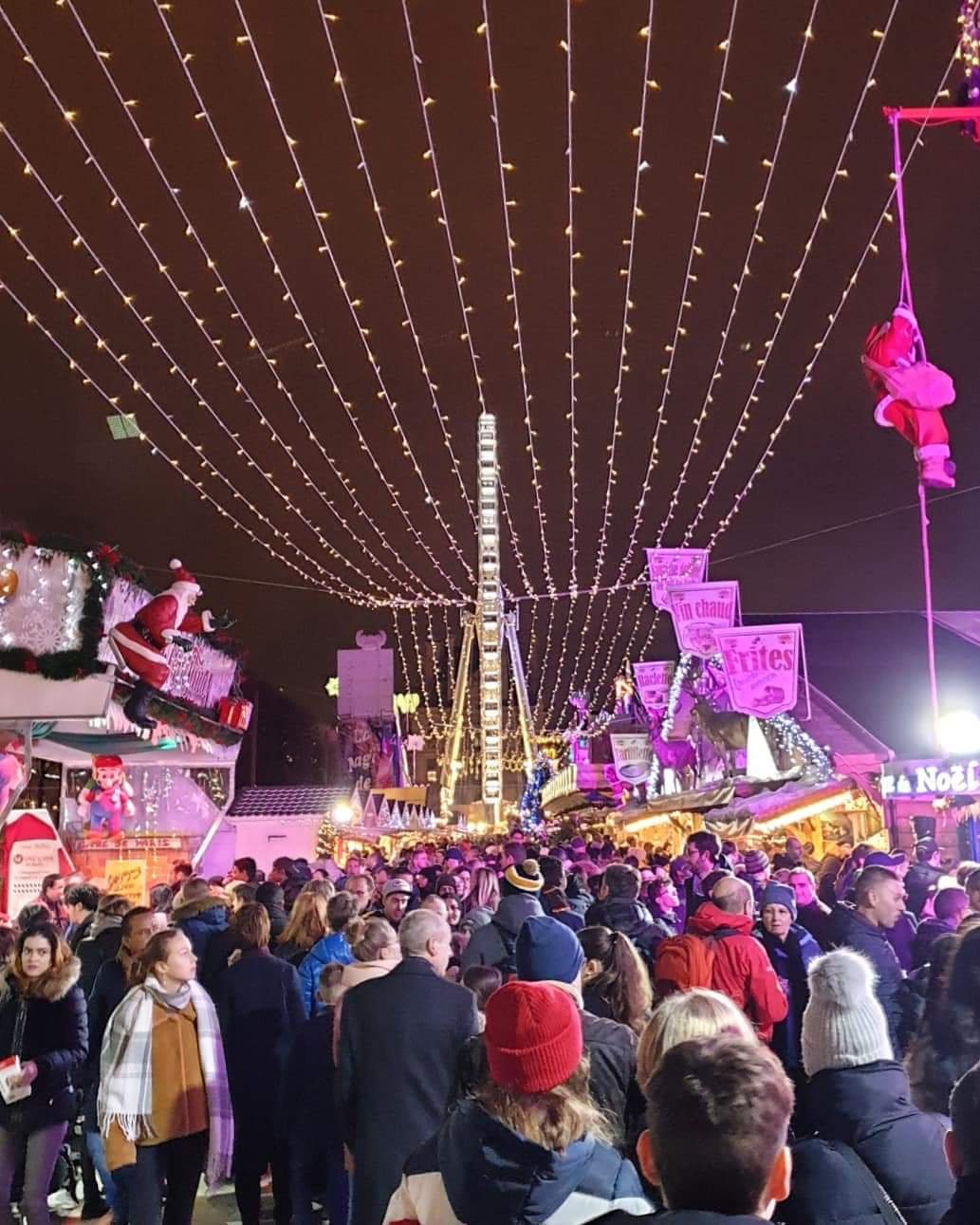 Since Day 1 was also our arrival day, it was much more leisurely than the next. Now it was Day 2, our only full day in Paris, and there was so much to see and do. We started the day with a 6-mile jog down the Seine, and were impressed by how many joggers were out on a Saturday morning. Once we were back and showered, we took an Über for €12 to the Champs-Élysées, where we ate at Five Guys for lunch. 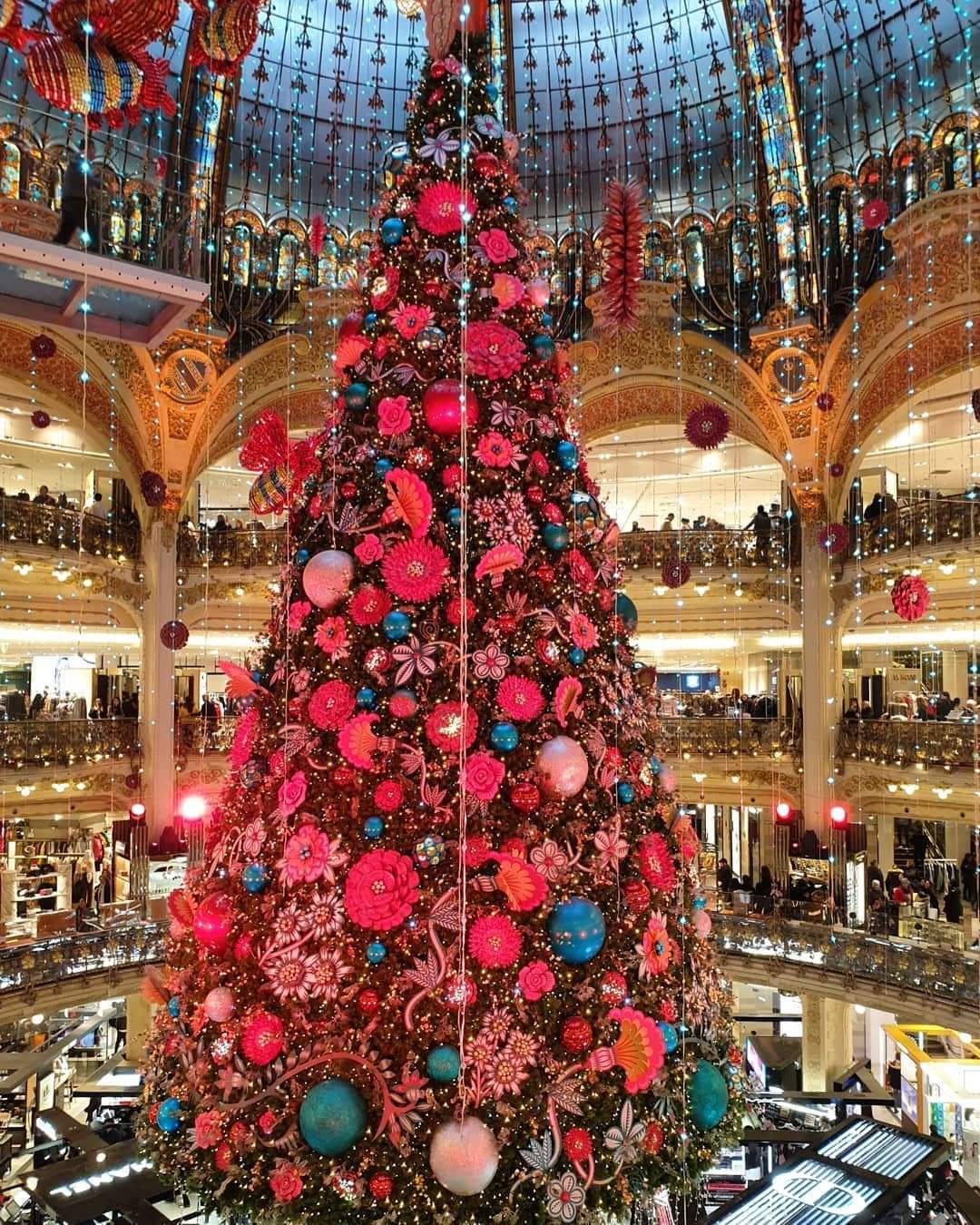 After lunch, we walked about 20 minutes to the luxurious shopping mall, Galeries Lafayette. The key word being “luxurious,” we usually end up going there to look around rather than shop. There are many high end stores, but the best part is massive display they have in the center of the mall during the holidays. We made our way to the top floor, where we got breathtaking views of the cityscape, which are probably the best views in Paris. While there, we enjoyed holiday music and rooftop ice skating in the background. Talk about being in the holiday spirit! 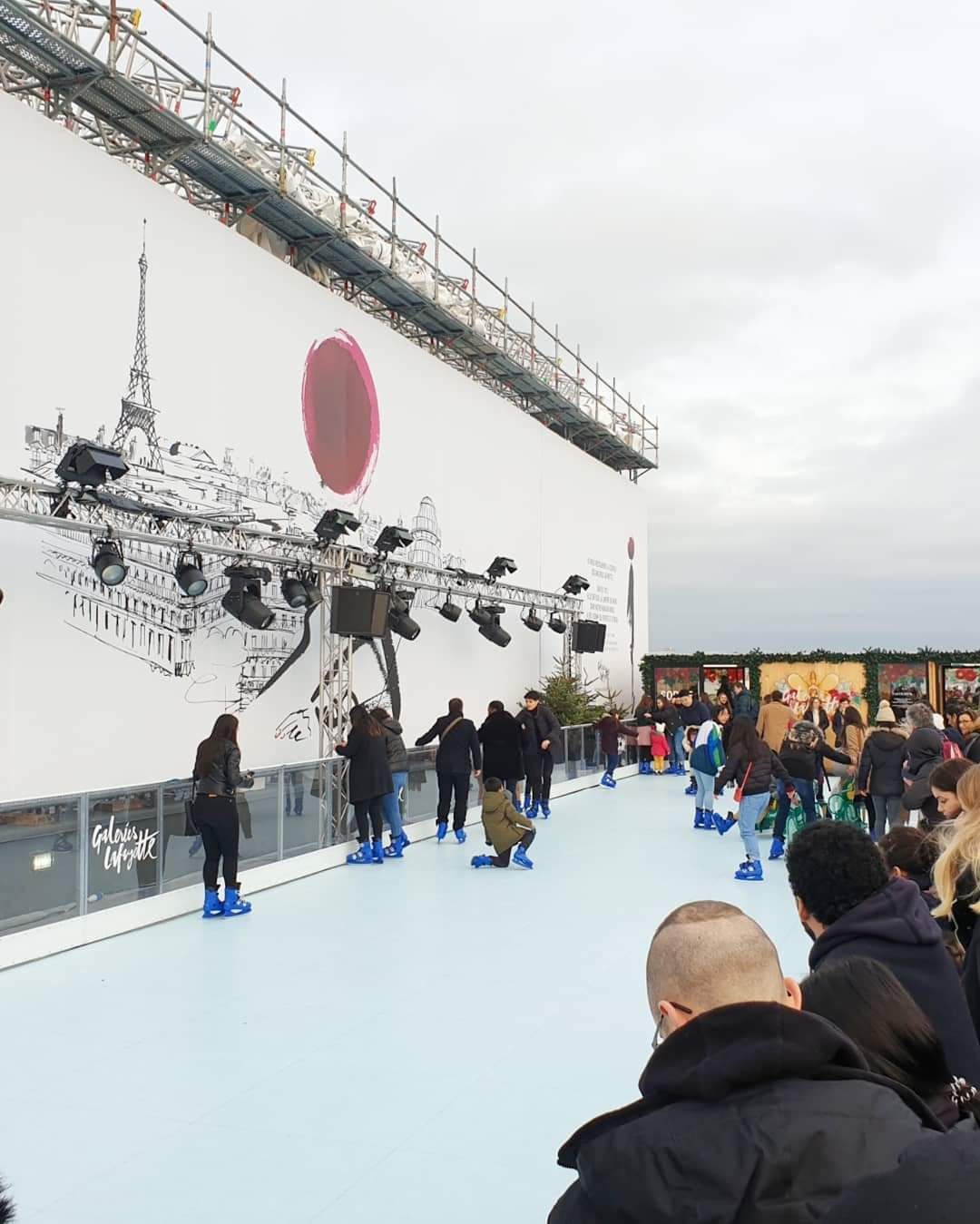 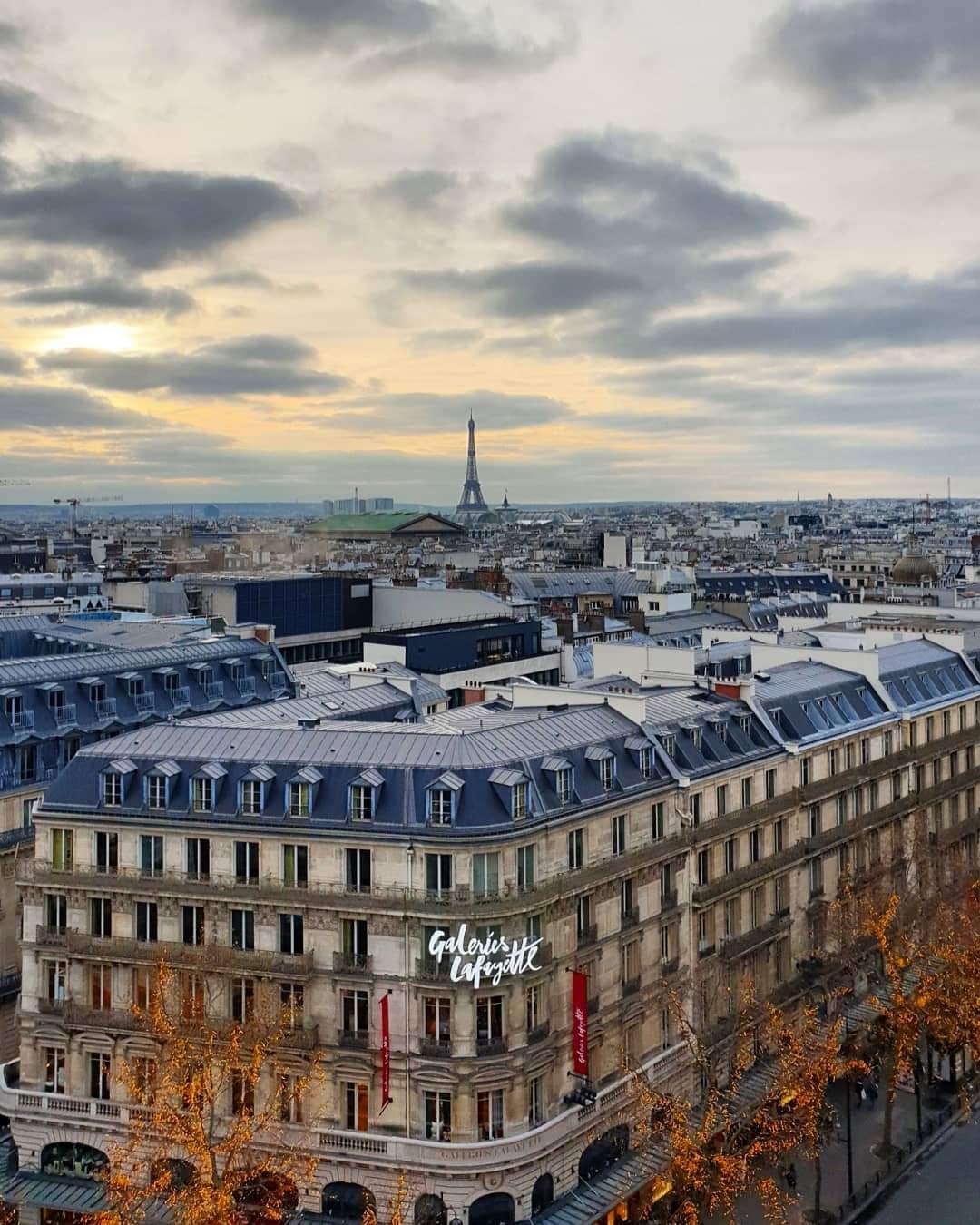 Once leaving Galeries Lafayette, we were surprised that people were getting on and off The Metro. In excitement, we rushed down to The Metro in hopes to catch a quick ride to our next destination. To our surprise, there were trains running and we didn’t even need a ticket to make it through the entrance. 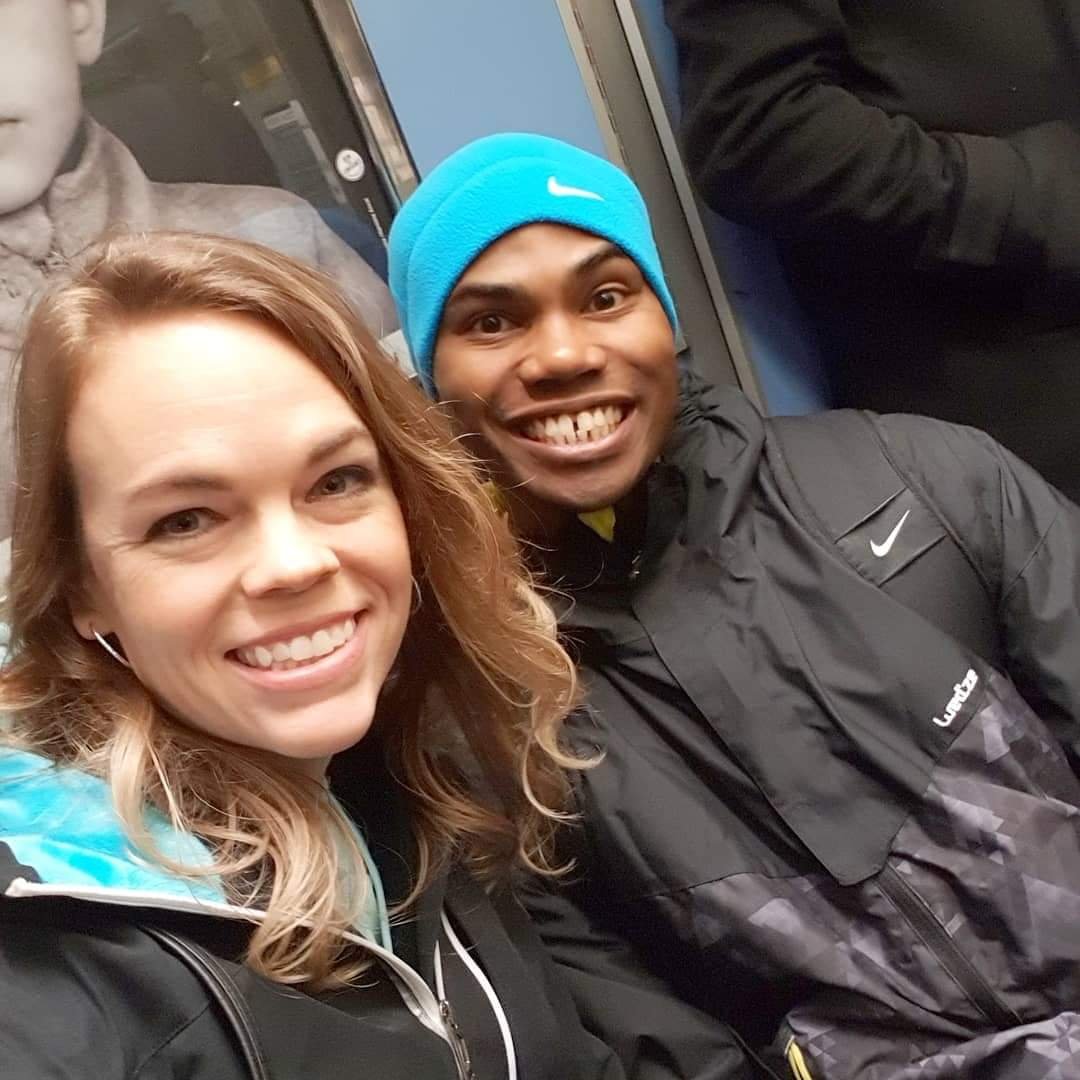 We took The Metro to Châtelet. As soon as we got off the train, we saw some hazy smoke around the platform, and then people in the smoke started sneezing. We stood there for a minute wondering what was going on, and when the smoke reached us, we started sneezing, too. We ran out of station into the fresh air, right into a demonstration! We realized that the irritating smoke must have been tear gas, so we quickly scurried out of the way of all the shouting people. 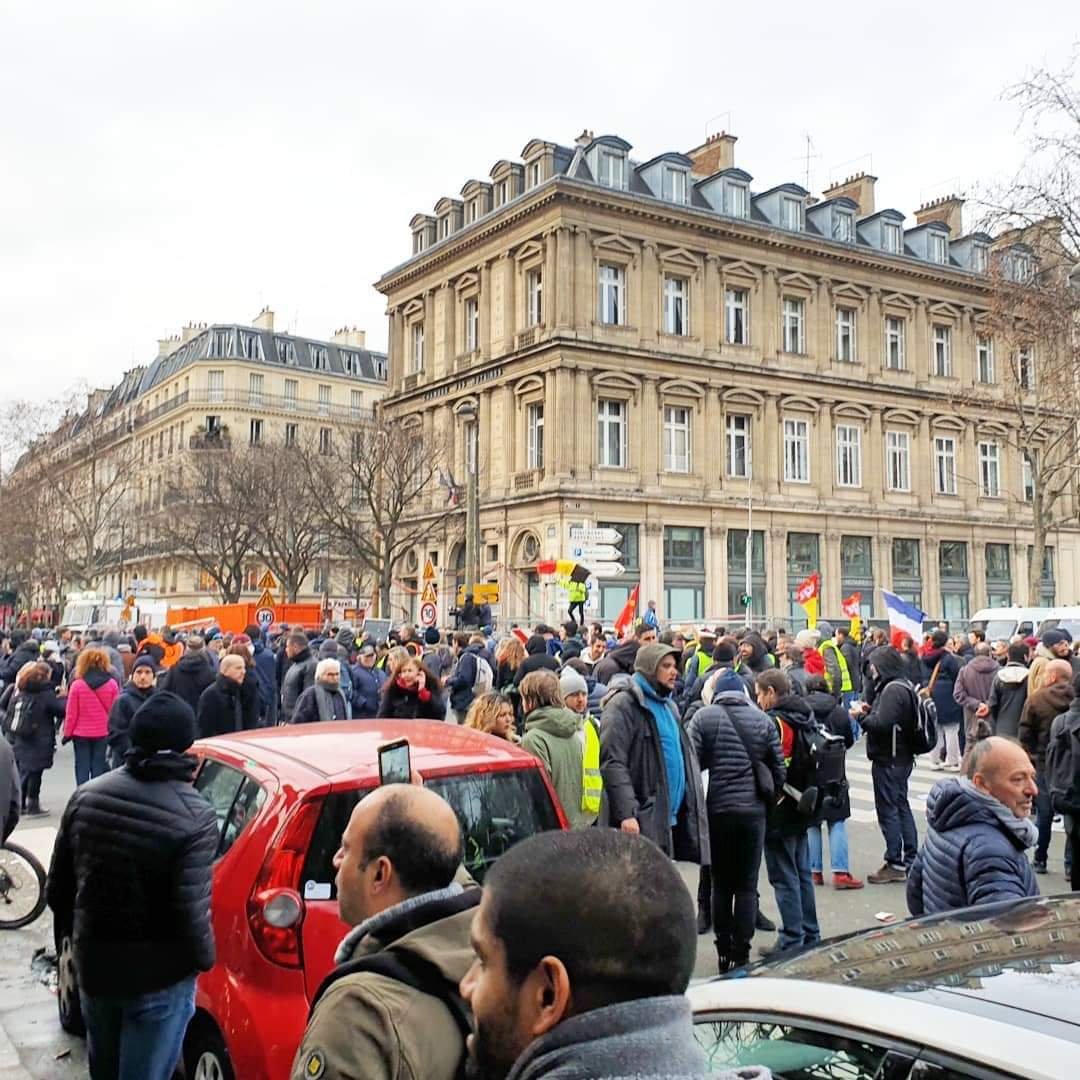 After what felt like a near death experience, we hurried over to the lovely Christmas Market in front of Hôtel de Ville. We hung around only long enough to grab a few snacks, snap pictures in front of La Super Marquette, and walk over to the Pont d’Arcole to the Île de la Cité. It was disheartening to see the Notre-Dame in its current condition following the April 2019 fire, but I suppose it is best to think of the beautiful cathedral as in rebirth and renaissance. Fortunately, we’ve visited when it was well intact, and we look forward to the say we can walk through the doors again. 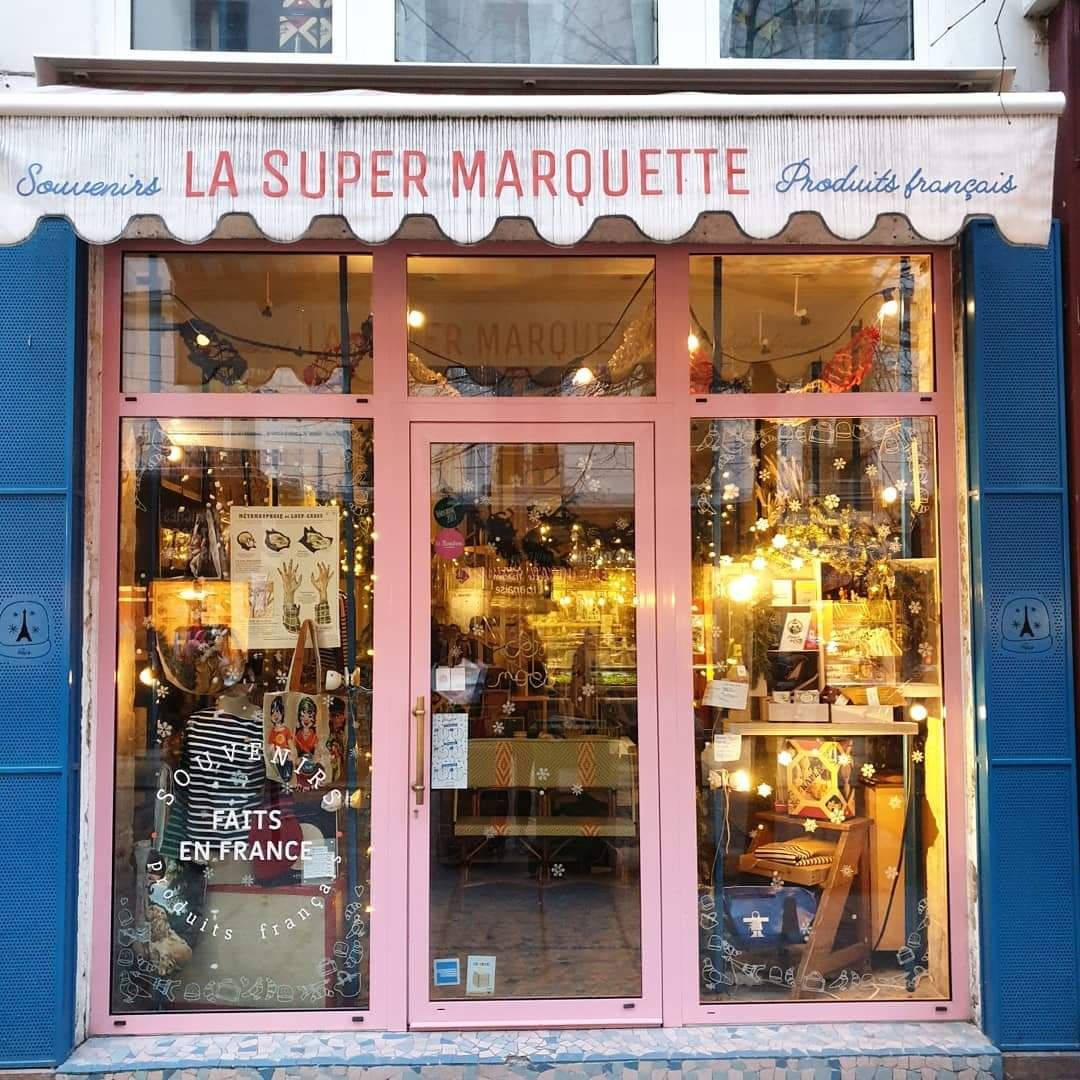 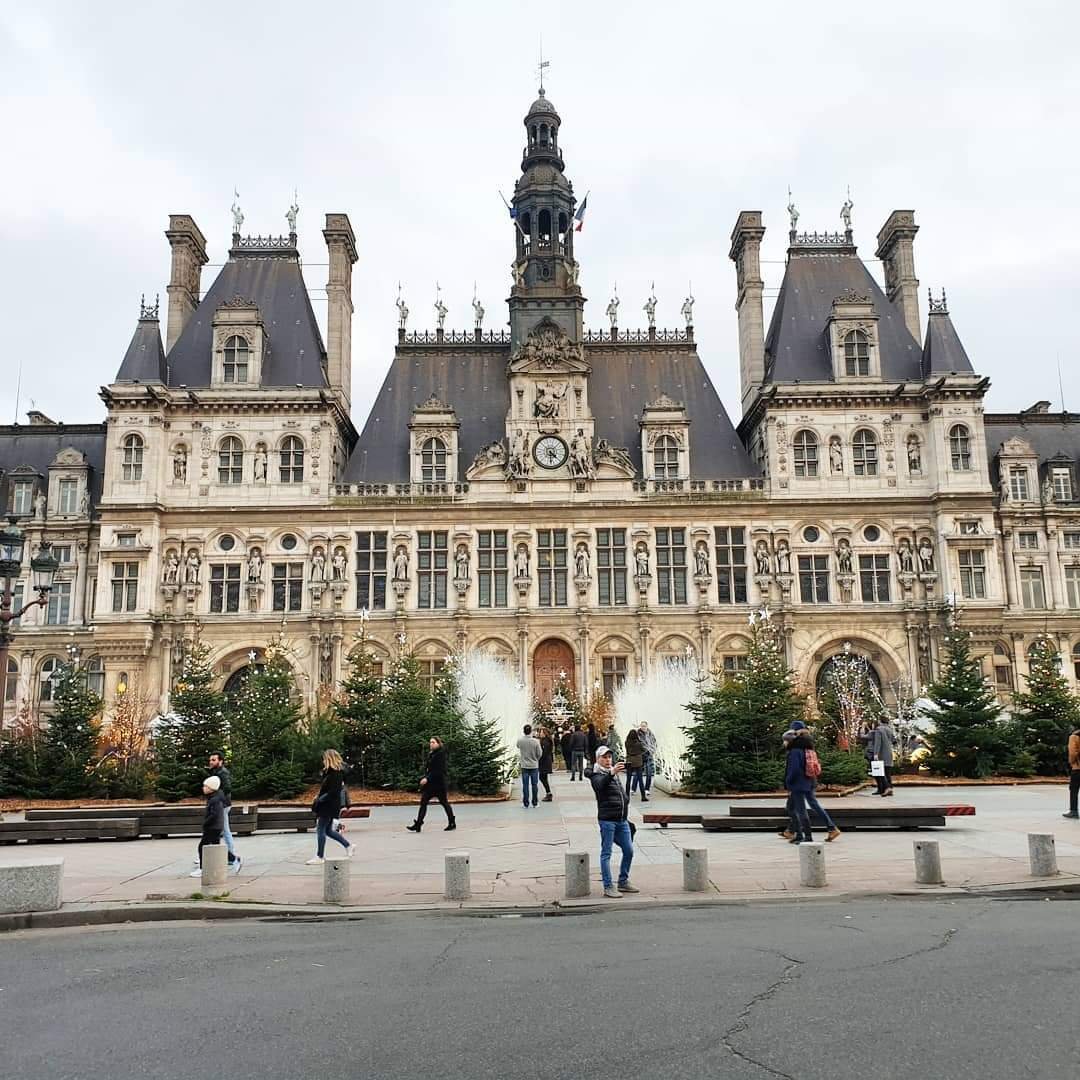 Known for its vibrant feel and situated directly across the Île de la Cité, we absolutely love the Latin Quarter. It’s always a great place to eat, drink, and just enjoy being. We made a quick stop at a picturesque restaurant front always worth seeing, Au Vieux Paris, and made our way to the bookstore Shakespeare & Company. 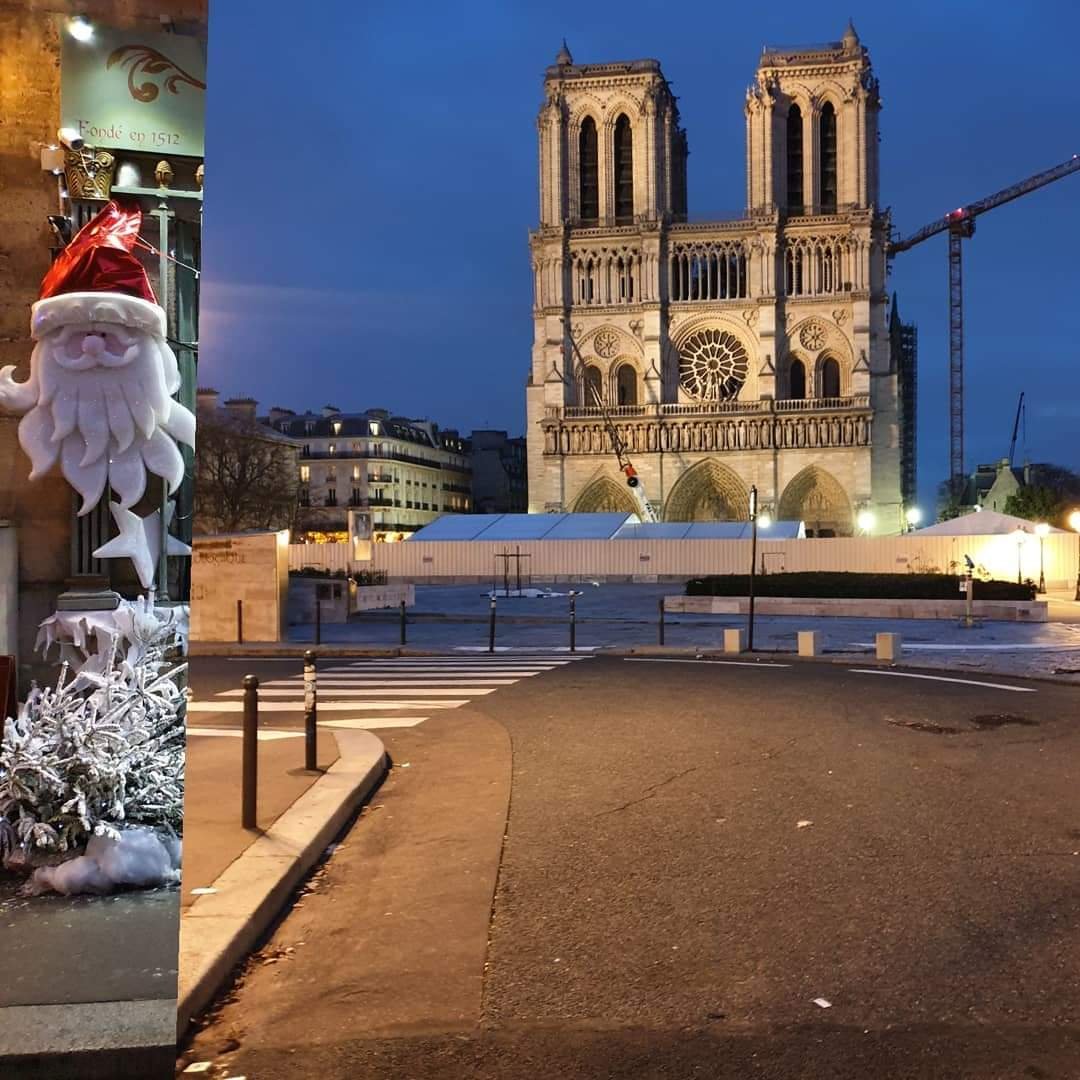 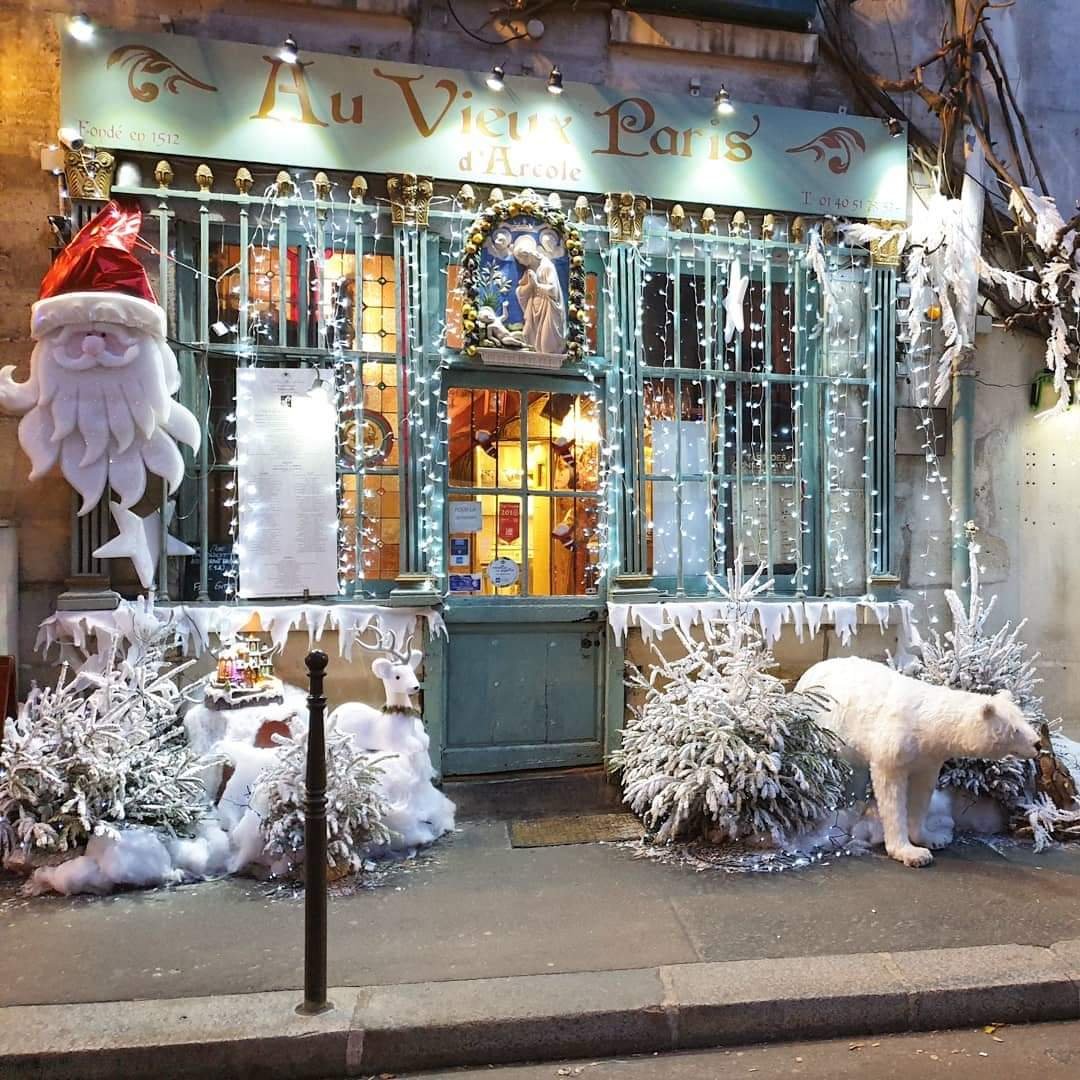 While the bookstore is usually crowded, it’s never hard to find a great book to bring home.
It was getting late, so we stopped in our favorite restaurant in Paris, Mamma Mia! Chances are, you’ve never heard of this quaint restaurant tucked in the Latin Quarter. I’m sure if you’ve walked by though, someone has tried to drag you in. Without fail, we always stop at Mamma Mia, as their spaghetti bolognese is just about as good as it gets. I also love that the restaurant is never crowded, the friendly service, and it’s much cheaper than anywhere else you’ll plan to eat. 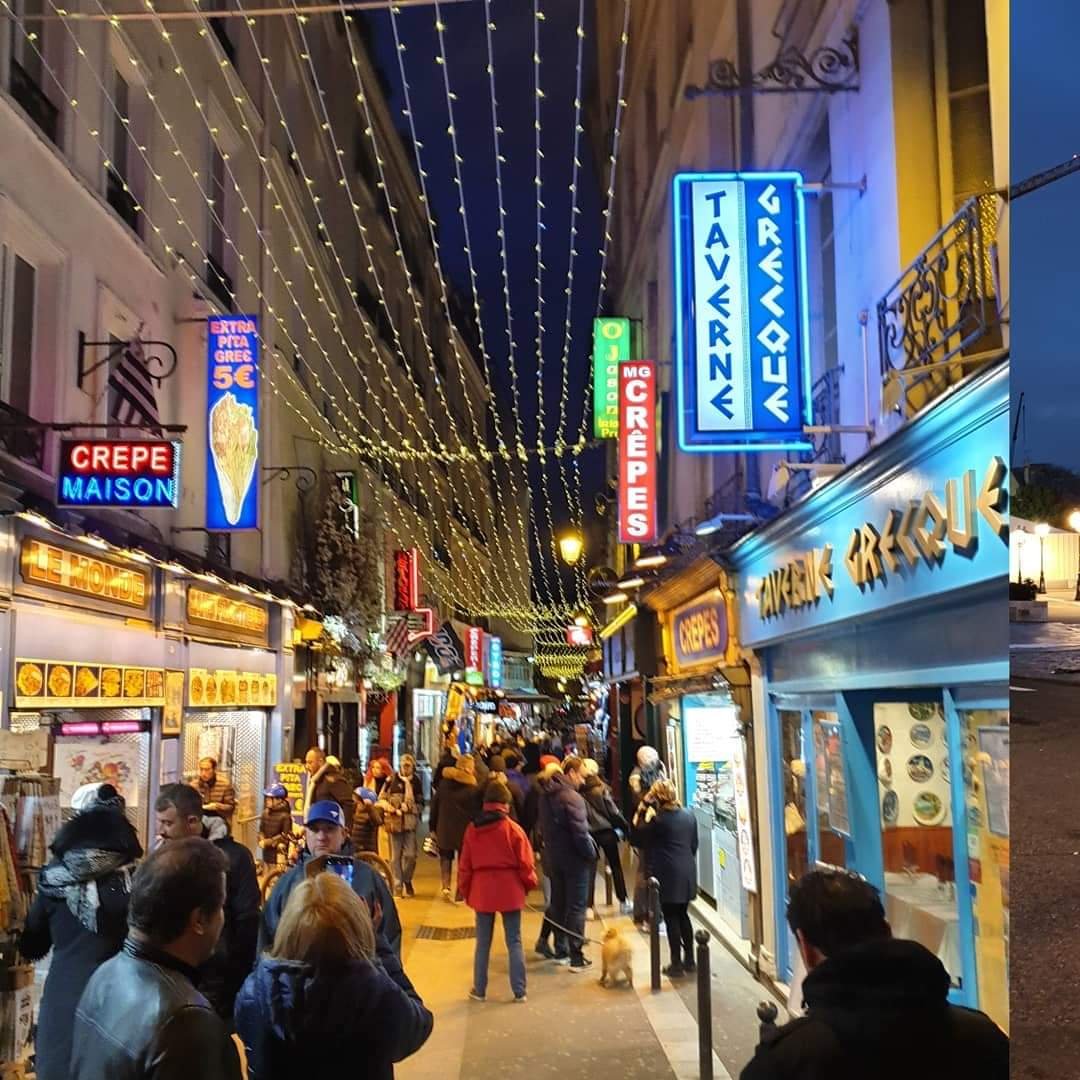 After eating at our favorite restaurant, it was time for a quick walk to our favorite pub, Galway Irish Pub (of course, also in the Latin Quarter). After a few Kilkenny’s, we caught an Über for €13 back to Hotel Baldi. 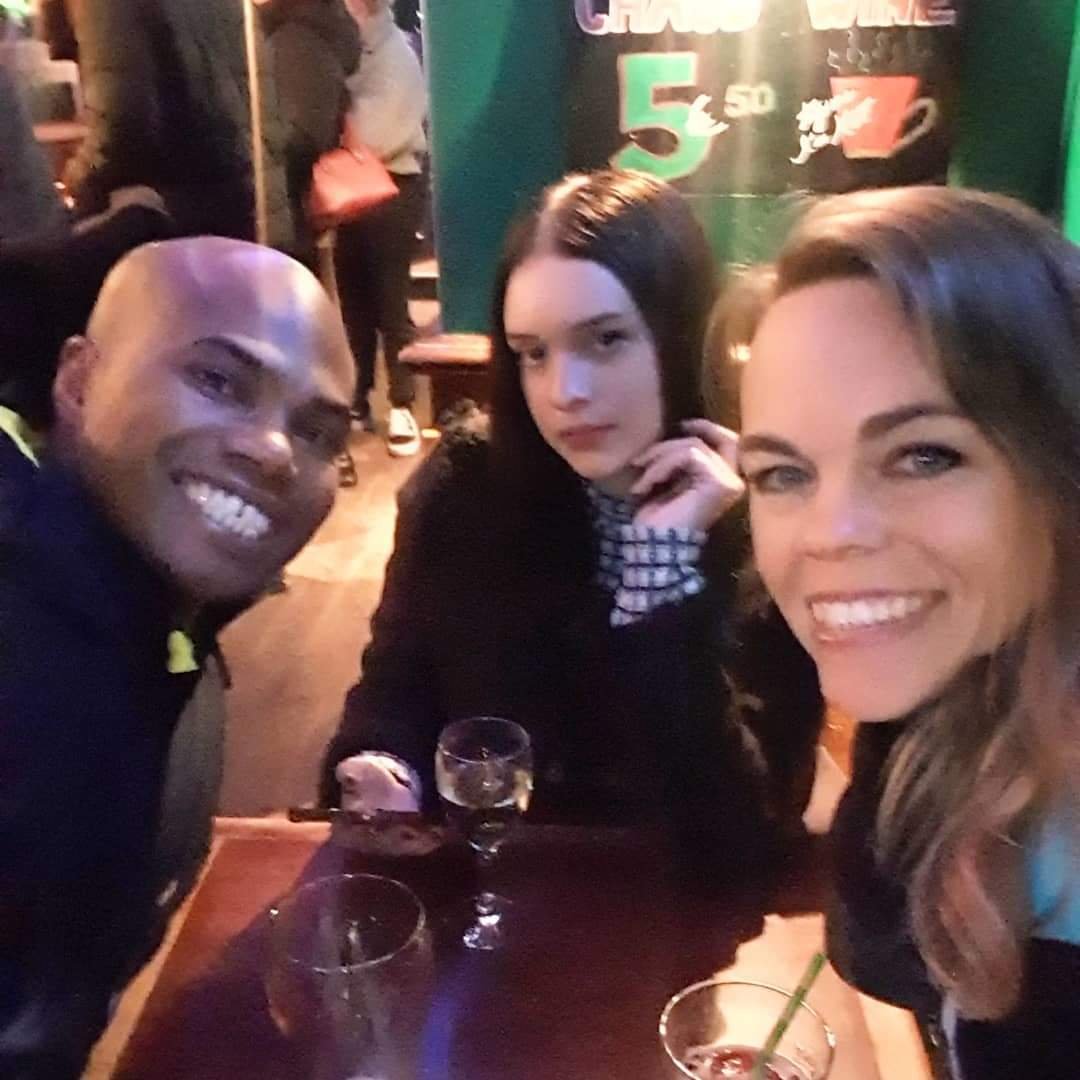 We didn’t do much on our last day except grab a quick breakfast and some goodies to bring home from Monoprix. Since I filled up with gas on the trip into Paris, we were able to make it all the way to the Esso just across the border, where we spent $34 filling up on gas. 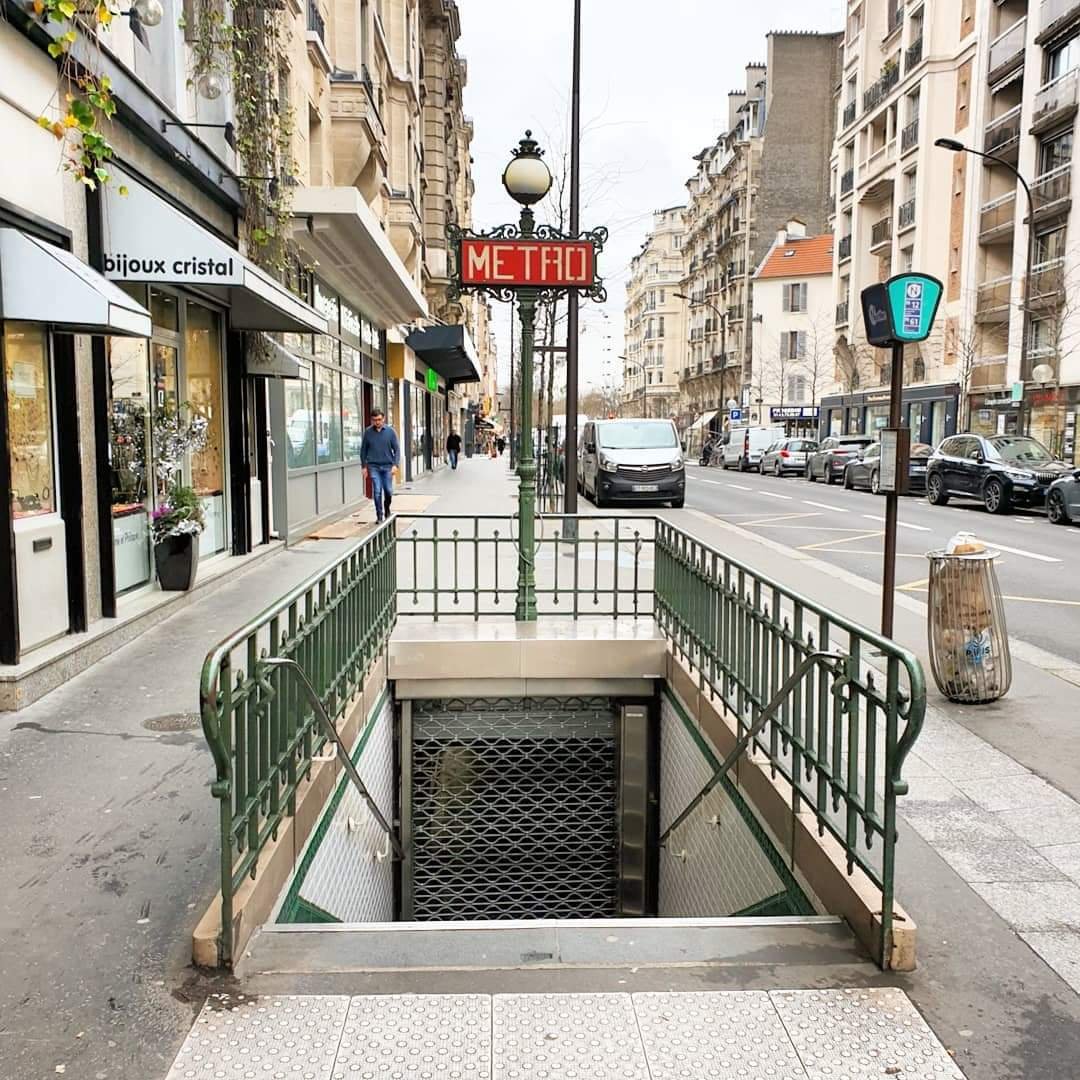 There’s our itinerary for Paris, and we were able to pack in plenty in two days without The Metro. Well, we did have the short tear gas ride, but we would have been better off without that experience. The only hiccup on our trip was walking into a demonstration, which we should have planned for better. 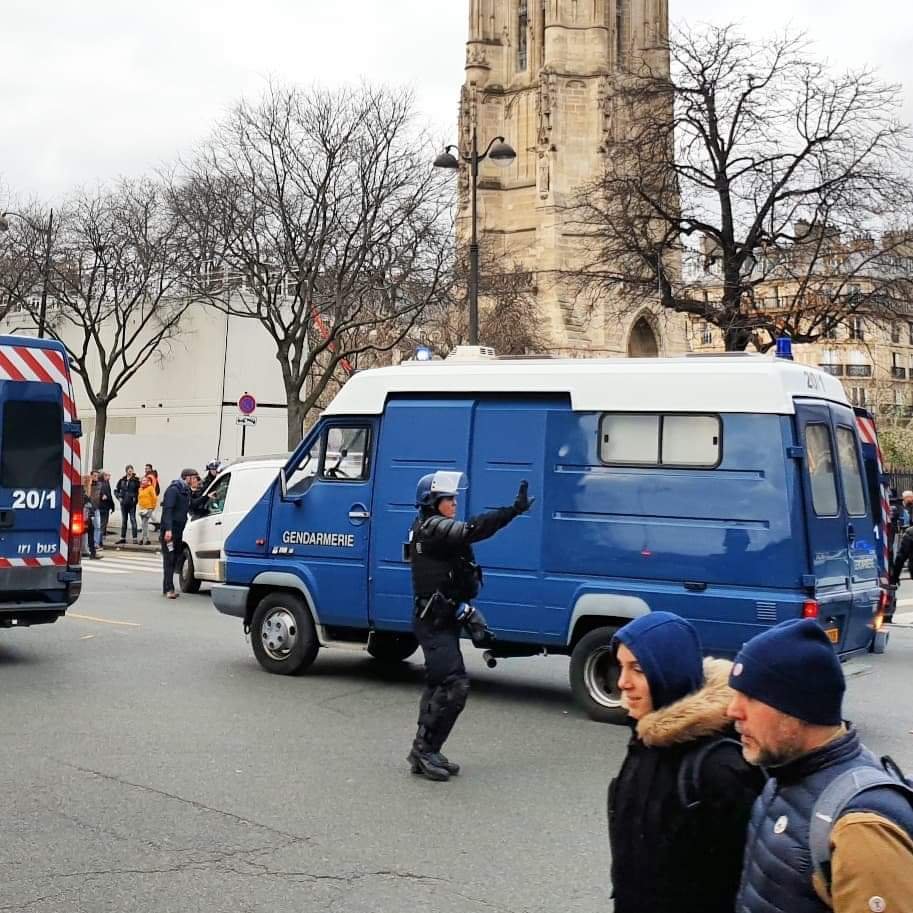 There’s so much to see when The Metro is running reliably, such as The Lourve, The Catacombs, Les Invalides, Sacré Cœur, and the list goes on. But there is no reason to cancel your trip for demonstrations you’ll probably never even see. Take advantage of everything the City of Light has to offer, and you won’t regret it! 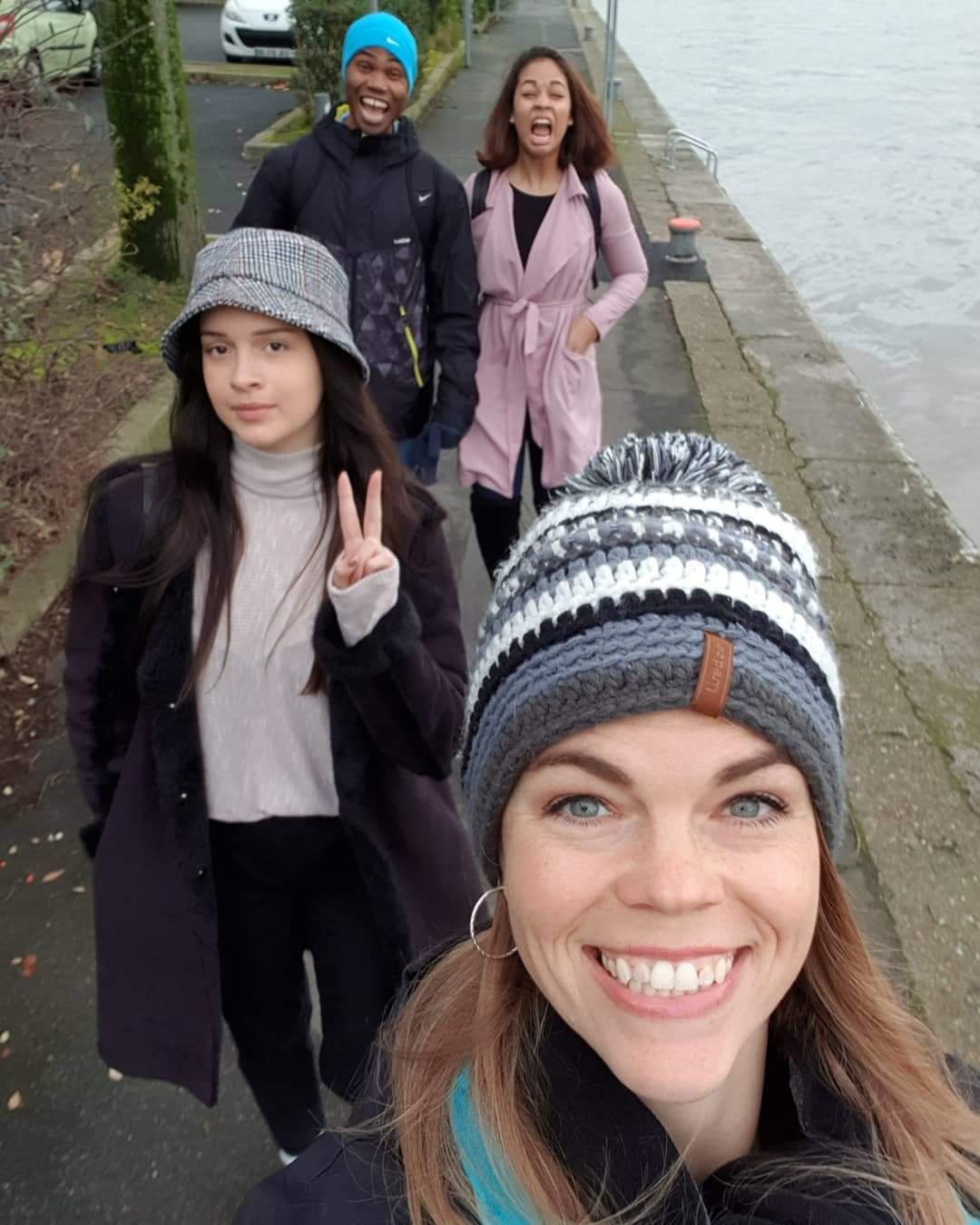