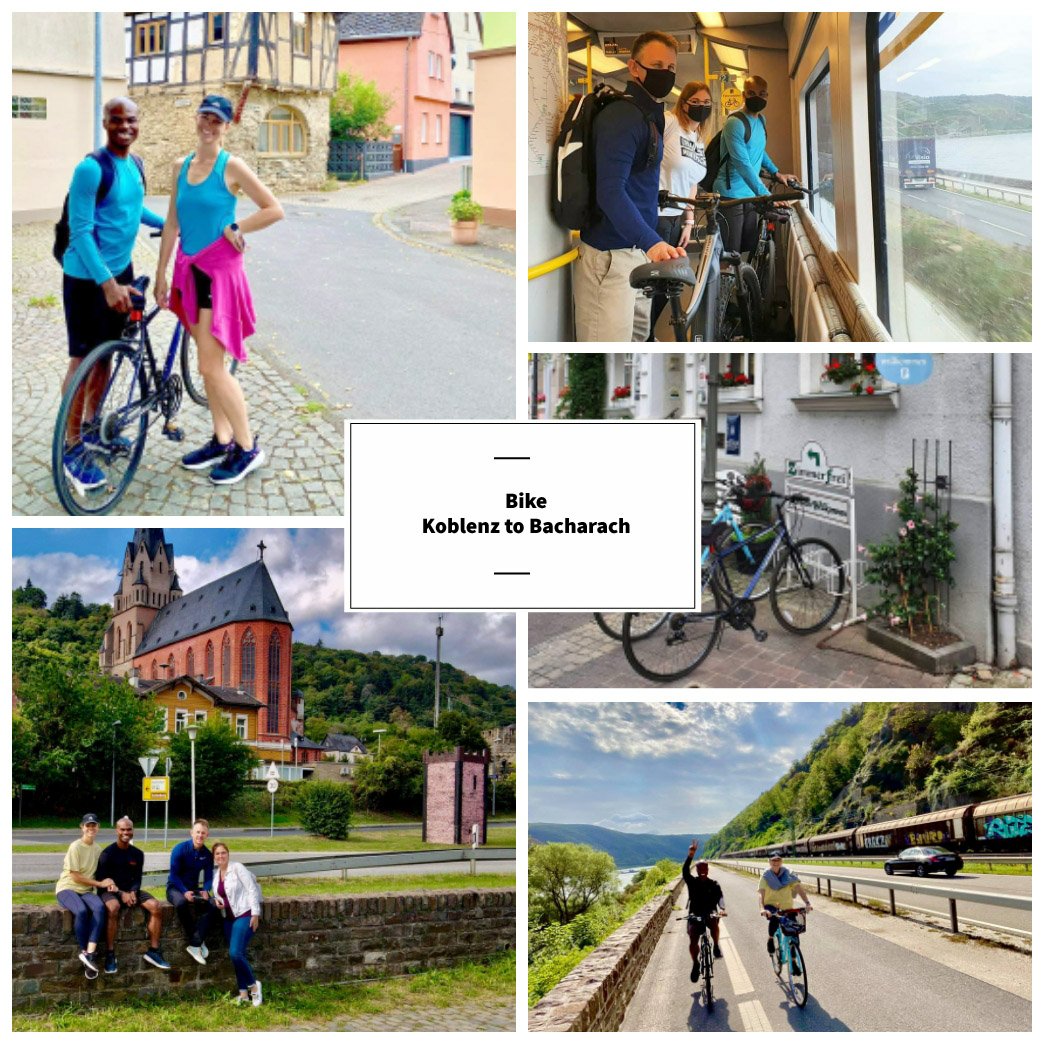 For months, we had the perfect September getaway planned for Switzerland. That all changed when our unit decided to put measures in place that prevented our trip. We had great company in our misery, as our pals Steven and Rhonda were also planning a Switzerland trip. With only a few days before the long weekend, we searched destinations in Germany. 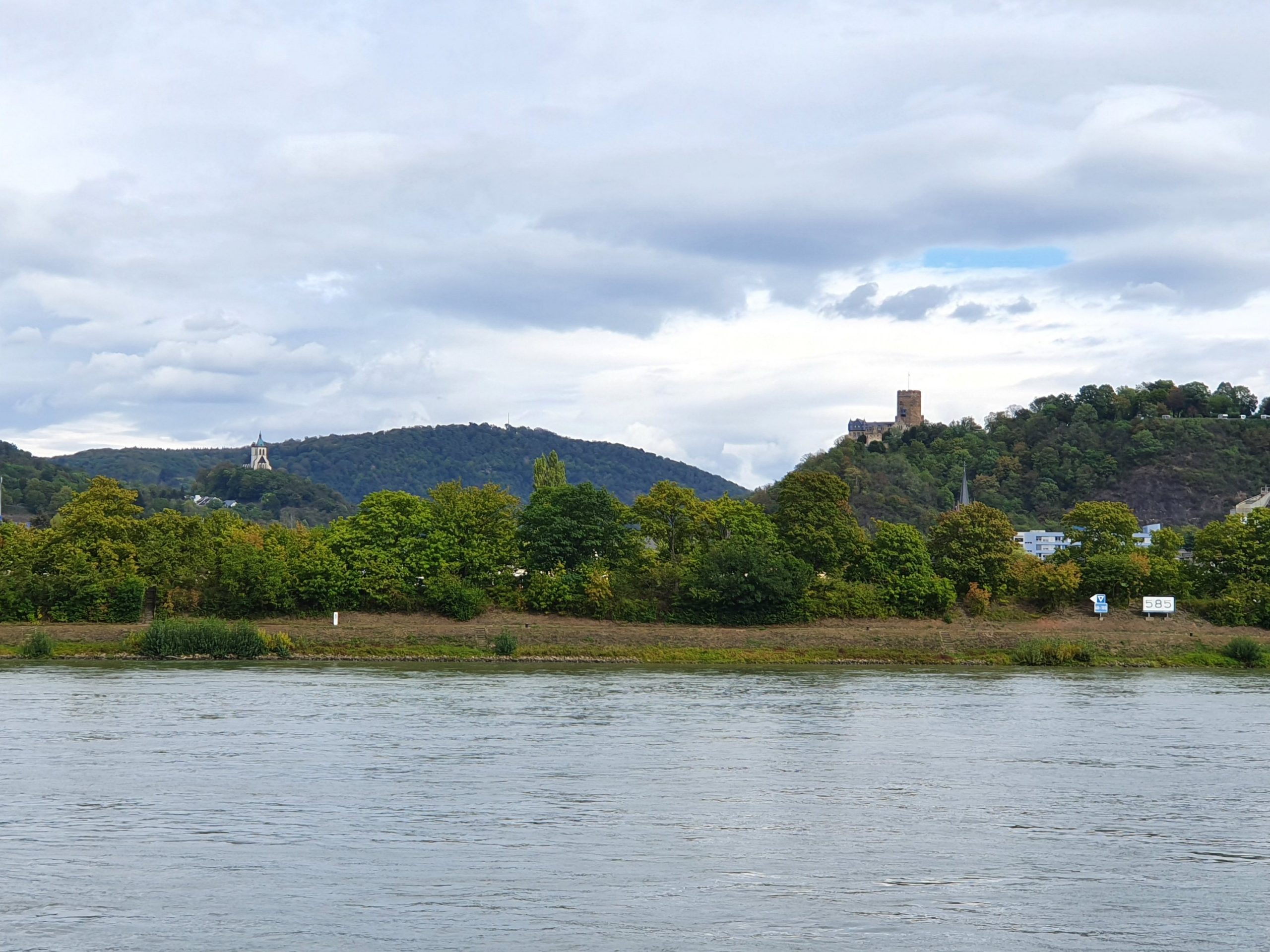 Since we were expecting amazing weather for the weekend, we decided to spend the weekend biking the long, flat, and paved bike paths in Germany’s wine region. The question came down to the Mosel or the Rhine, which seemed to be much harder than expected. While we love the bustling Rhine full of water traffic moving up and down, we love the quaint villages of the Mosel that sit beneath steep vineyards. We also love how bridges span the Mosel, unlike the Rhine where you generally need a ferry to get across. In the end, we decided to book a trip biking the Rhine. 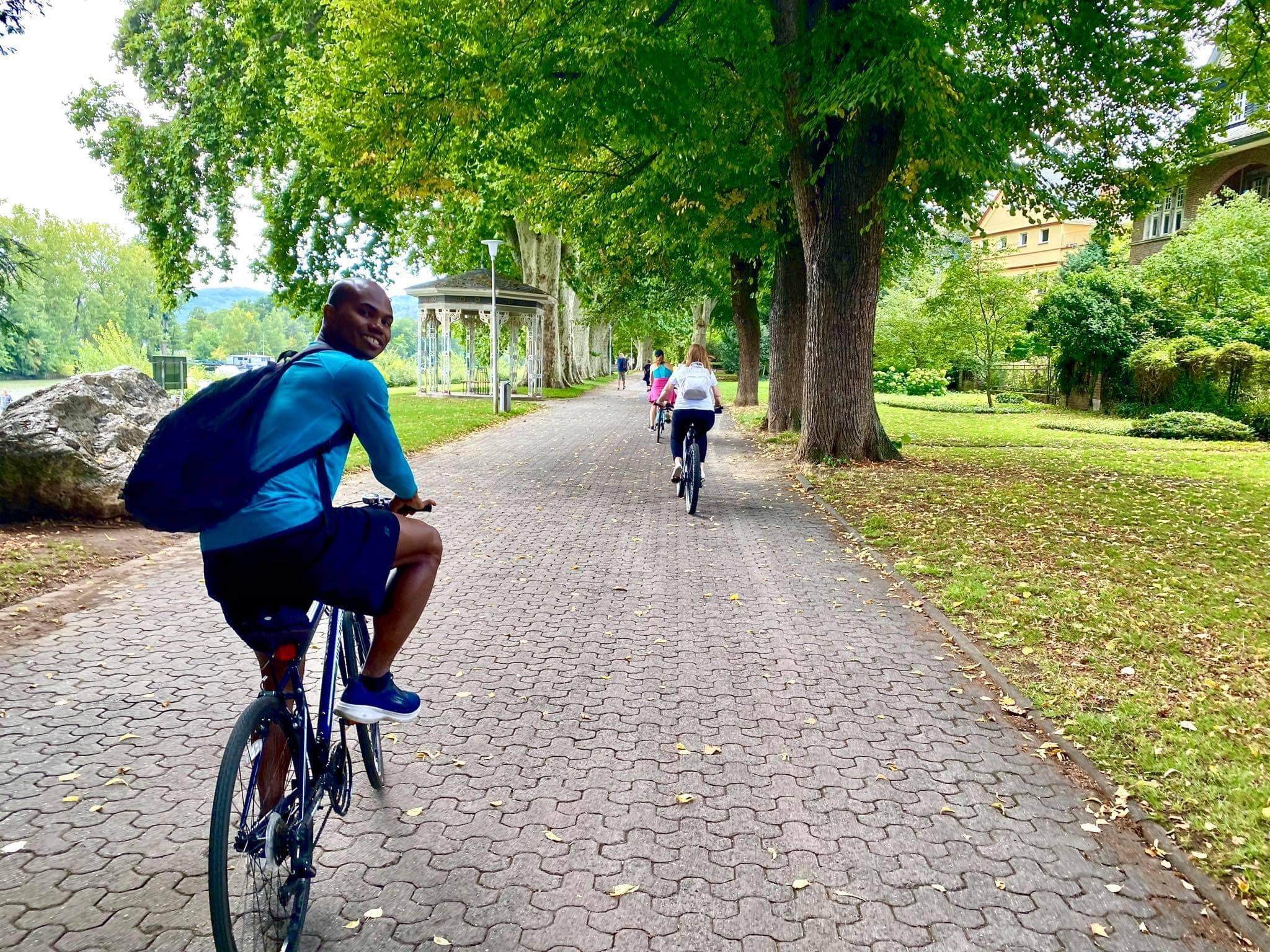 Since we did a Bacharach to Bingen bike trip earlier this year, we decided to bike from Koblenz to Bacharach this time. We decided to bike this 31 mile trip with an overnight stay somewhere in between. We found the perfect town to stay in along a river bend, Boppard. 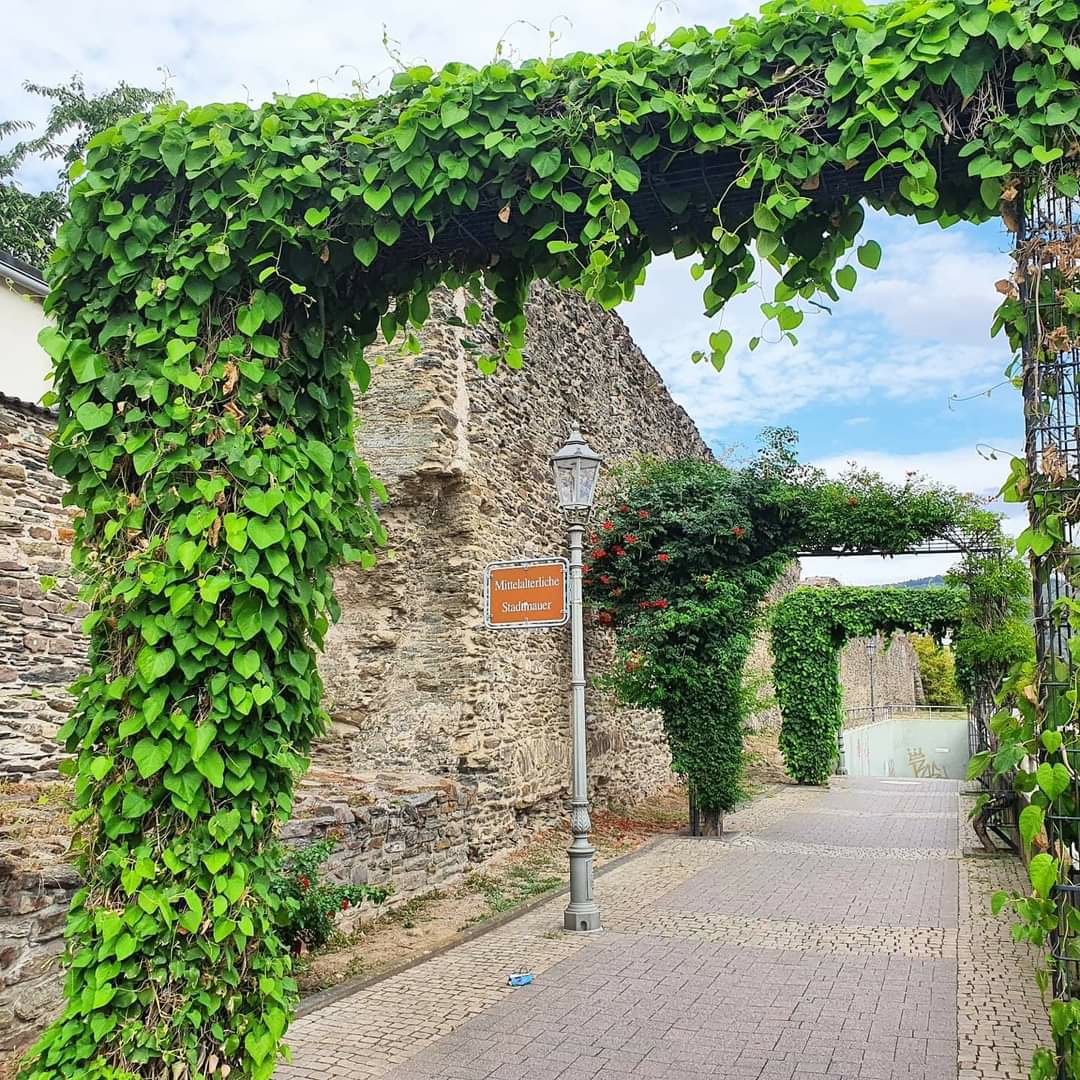 We booked our own rooms at City Hotel Hünsrucker Hof, costing only €71 for the night we stayed there. Since we got there in the morning and before check-in, we parked at the town’s free parking garage, Parkhaus Marienberg. 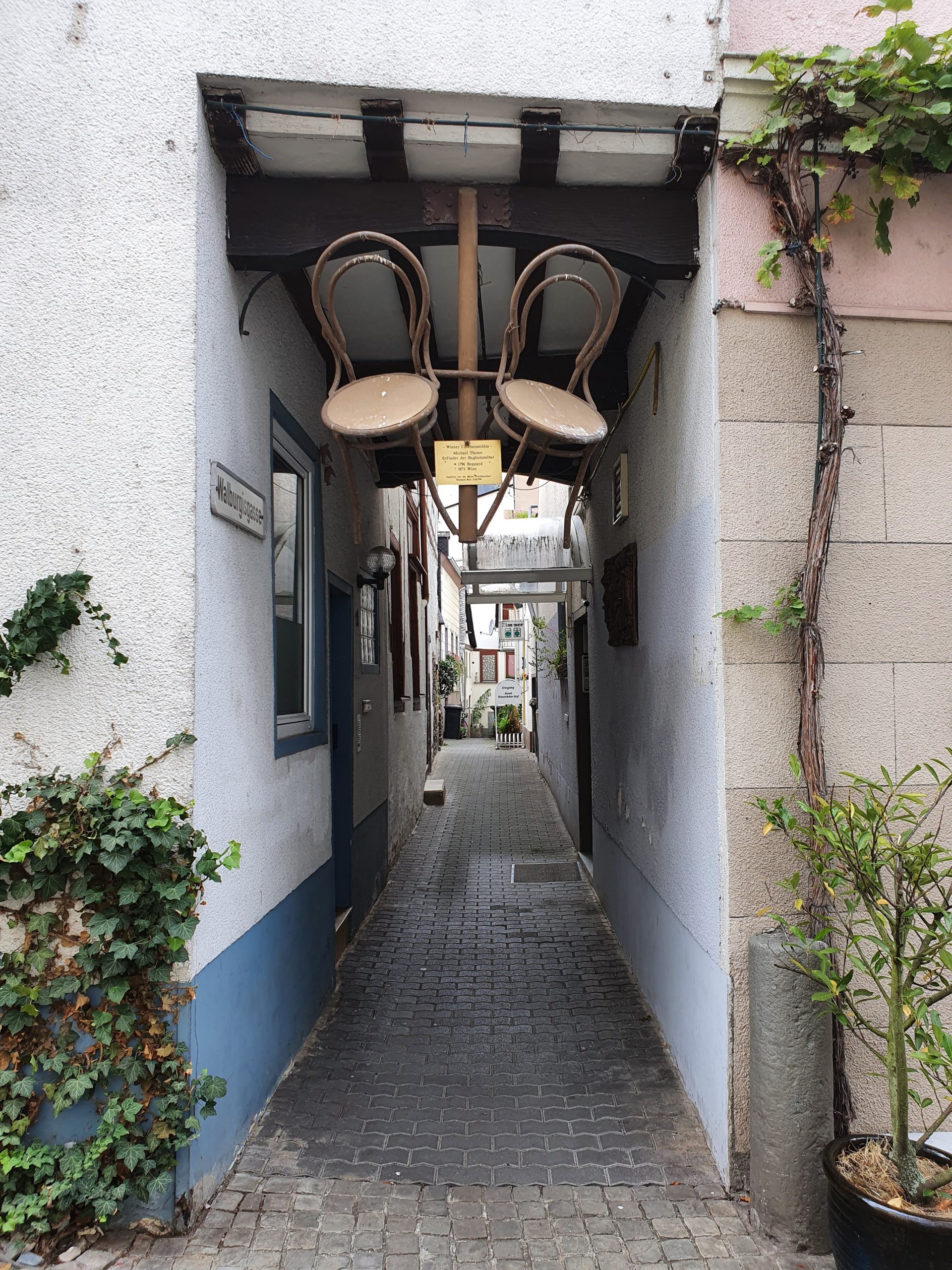 The plan was to base out of Boppard, which was nearly halfway between Koblenz and Bacharach. We would take the train with our bikes from Boppard to Koblenz, then return via bike ride from Koblenz to Boppard. We would stay the night in Boppard, and then take the train the next day down to Bacharach. From Bacharach, we would finish our trip with a return bike ride to Boppard. That’s exactly how our trip worked out. 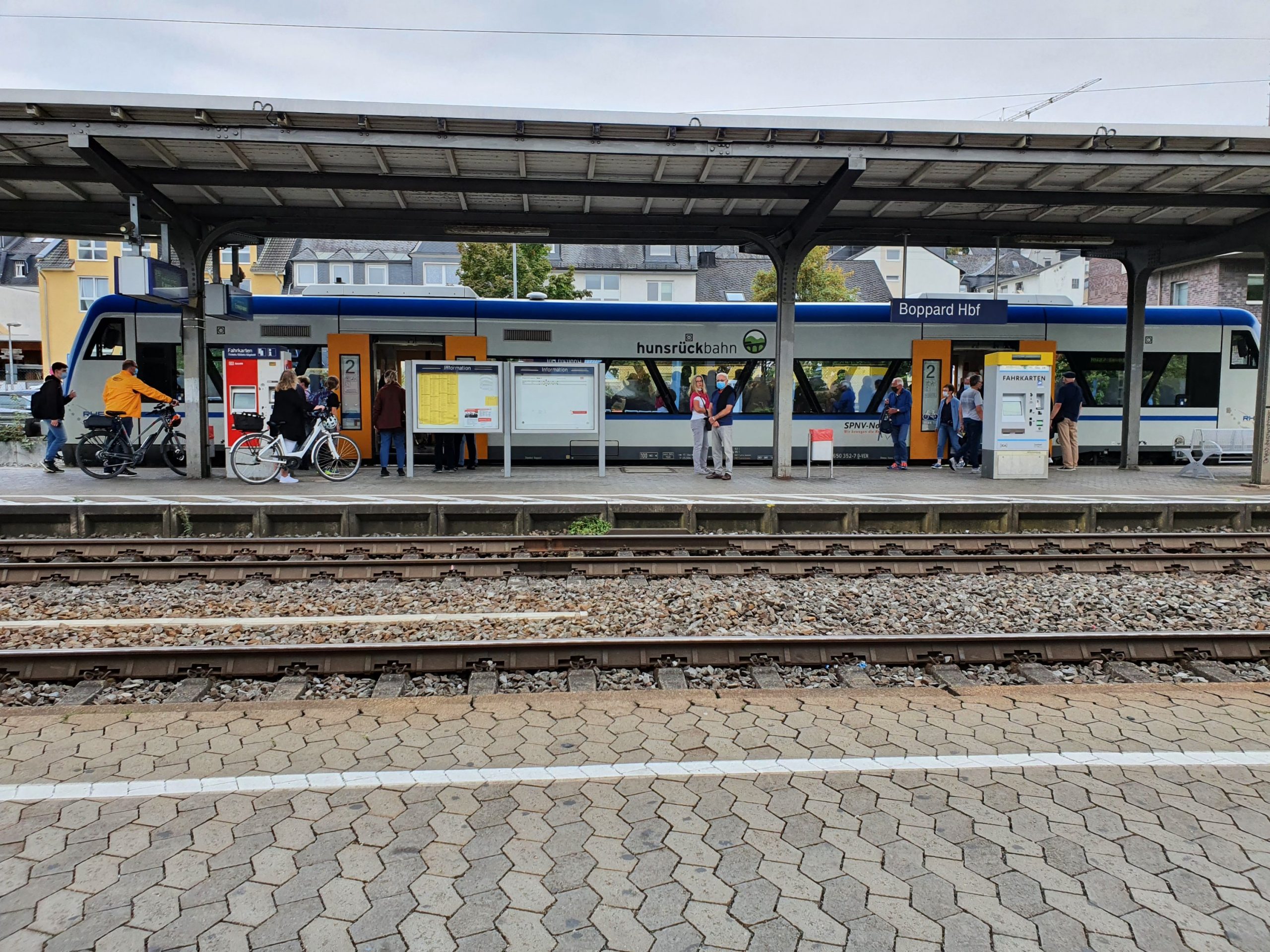 Once parked at Parkhaus Marienberg, we took the short bike ride to the Boppard Main Train Station. We went to the kiosk and purchased a ticket for our train trip to Koblenz. We bought a regional day ticket for four people which only costed about €30 total. As the kiosk instructed us, we didn’t need to buy a separate ticket for our bikes, since we weren’t traveling before 9am on a week day. 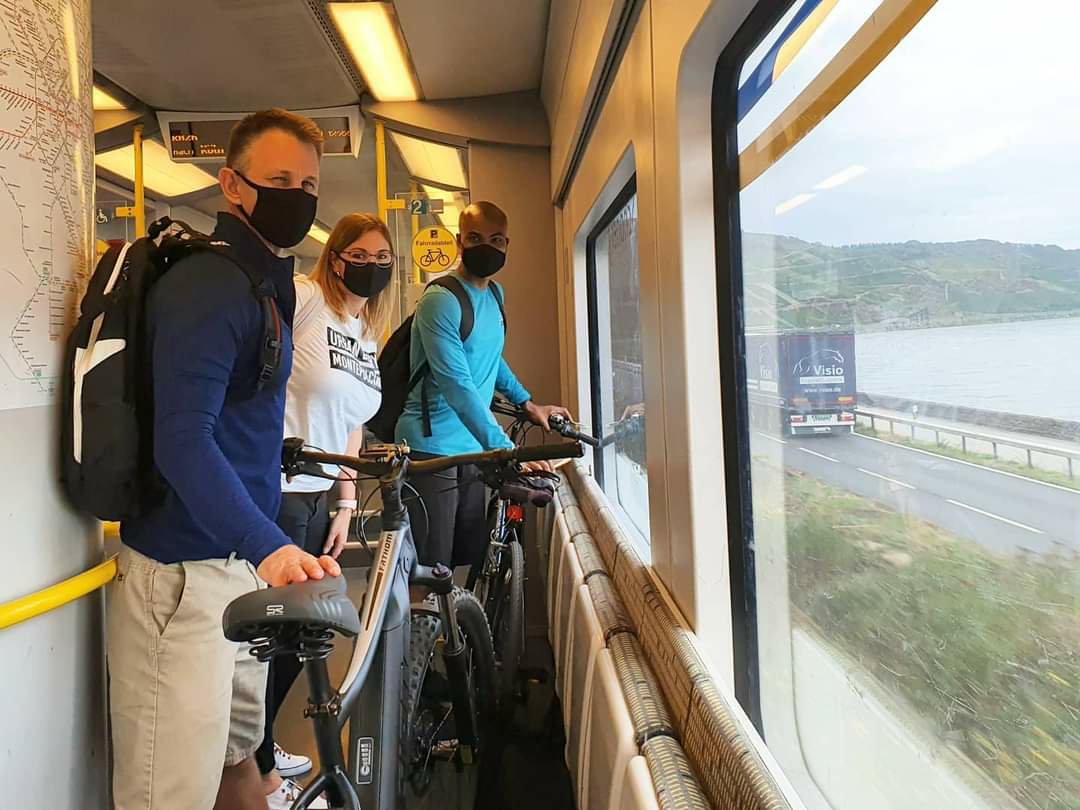 We took the short train ride to Koblenz, and our first stop was to grab something to eat along the river. We headed that way and had a traditional German lunch and drinks at the Königsbacher Biergarten along the Mosel. After a quick lunch, we scurried just down the bike path to Deutsches Eck, the point that marks the merging of two prominent rivers, the Rhine and Mosel. Located near the Deutsches Eck is a large statue of the 19th Century German Emperor, Kaiser Wilhelm I. The original statue was destroyed in World War II, but re-erected following German Reunification. The statue now stands as a symbol of German Unity. 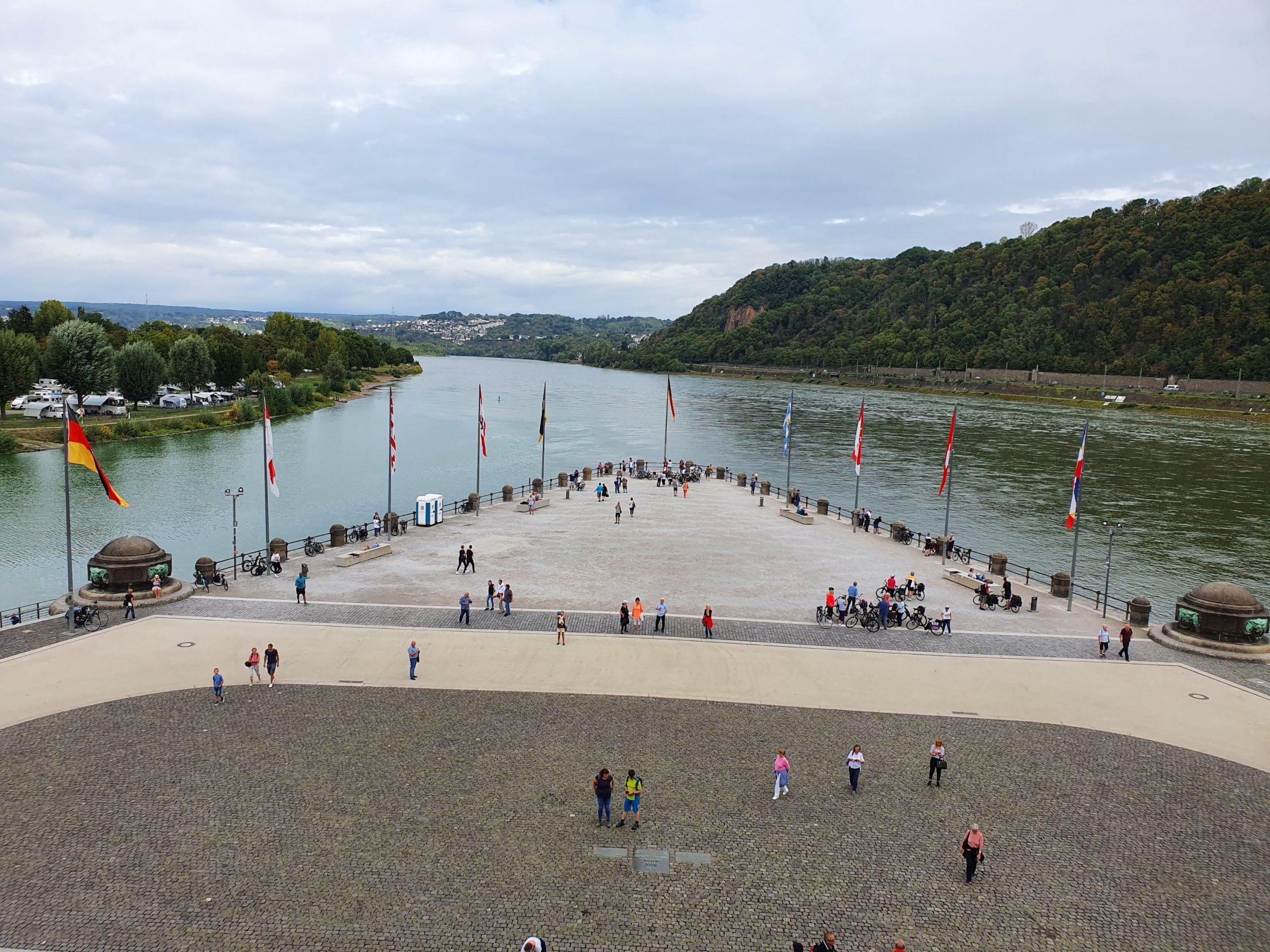 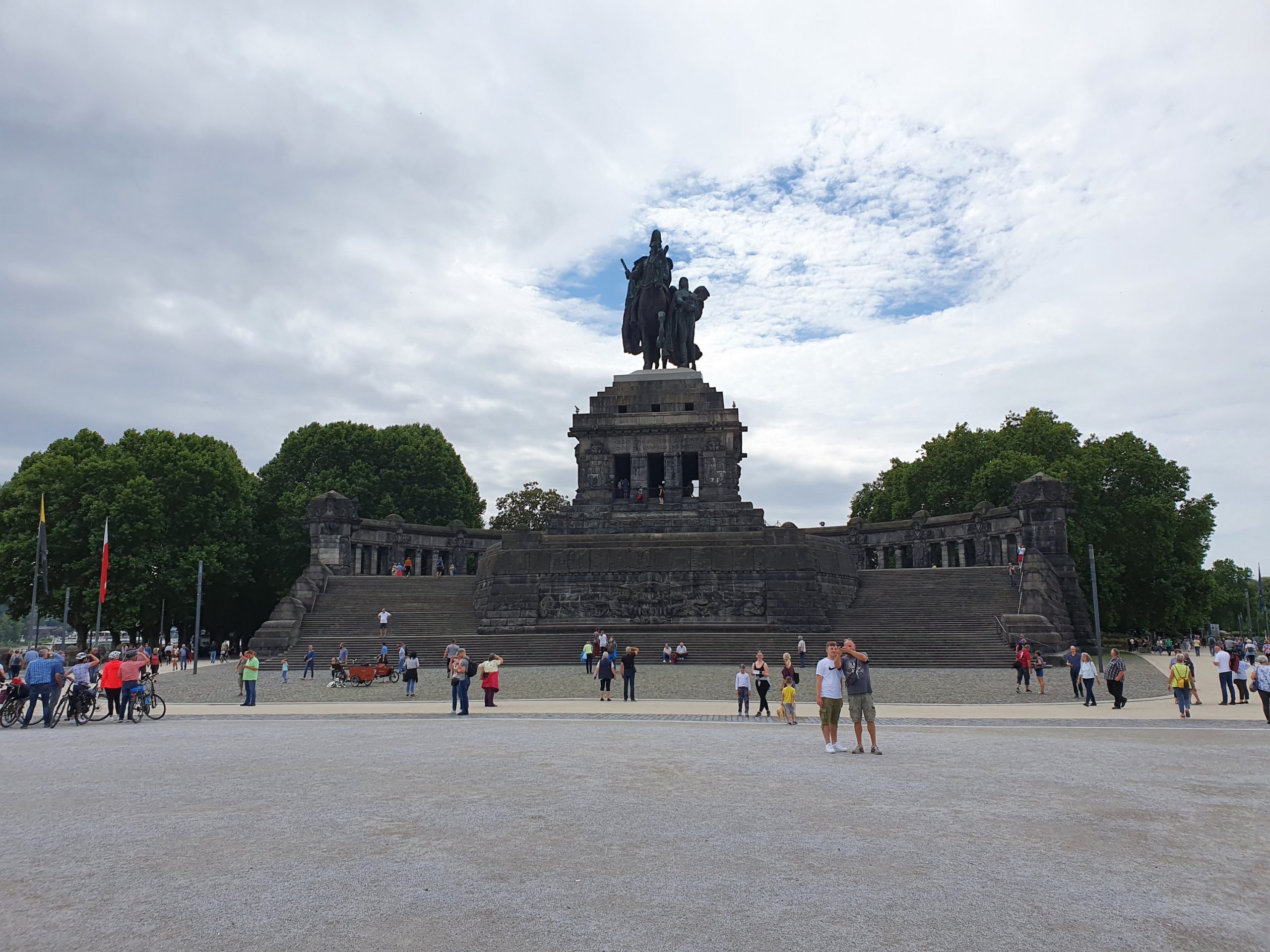 After relaxing at the Deutsches Eck, we decided to do the first leg of our bike ride. We originally planned to bike from Koblenz to St. Goar, although we didn’t quite make it that far. While biking down the Rhine, we enjoyed the flat and paved bike path, free of vehicle traffic. 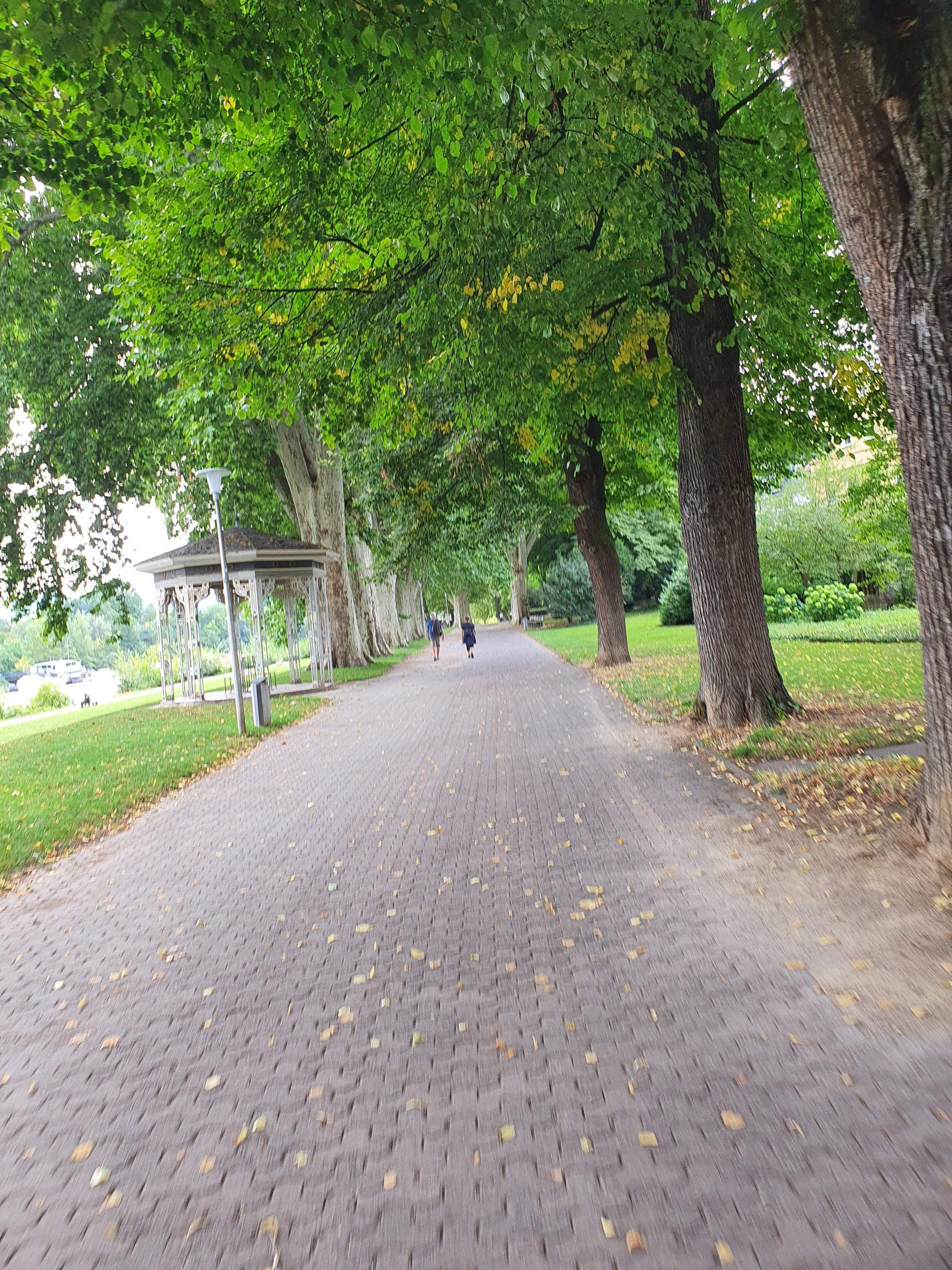 Our favorite part was admiring the hilltop castles along the Rhine, passing by Burg Lahneck, Stolzenfels Castle, and Marksburg Castle along the way. We stopped a few times to snap pictures, including at the foot of Stolzenfels Castle so Steven could capture drone photos. 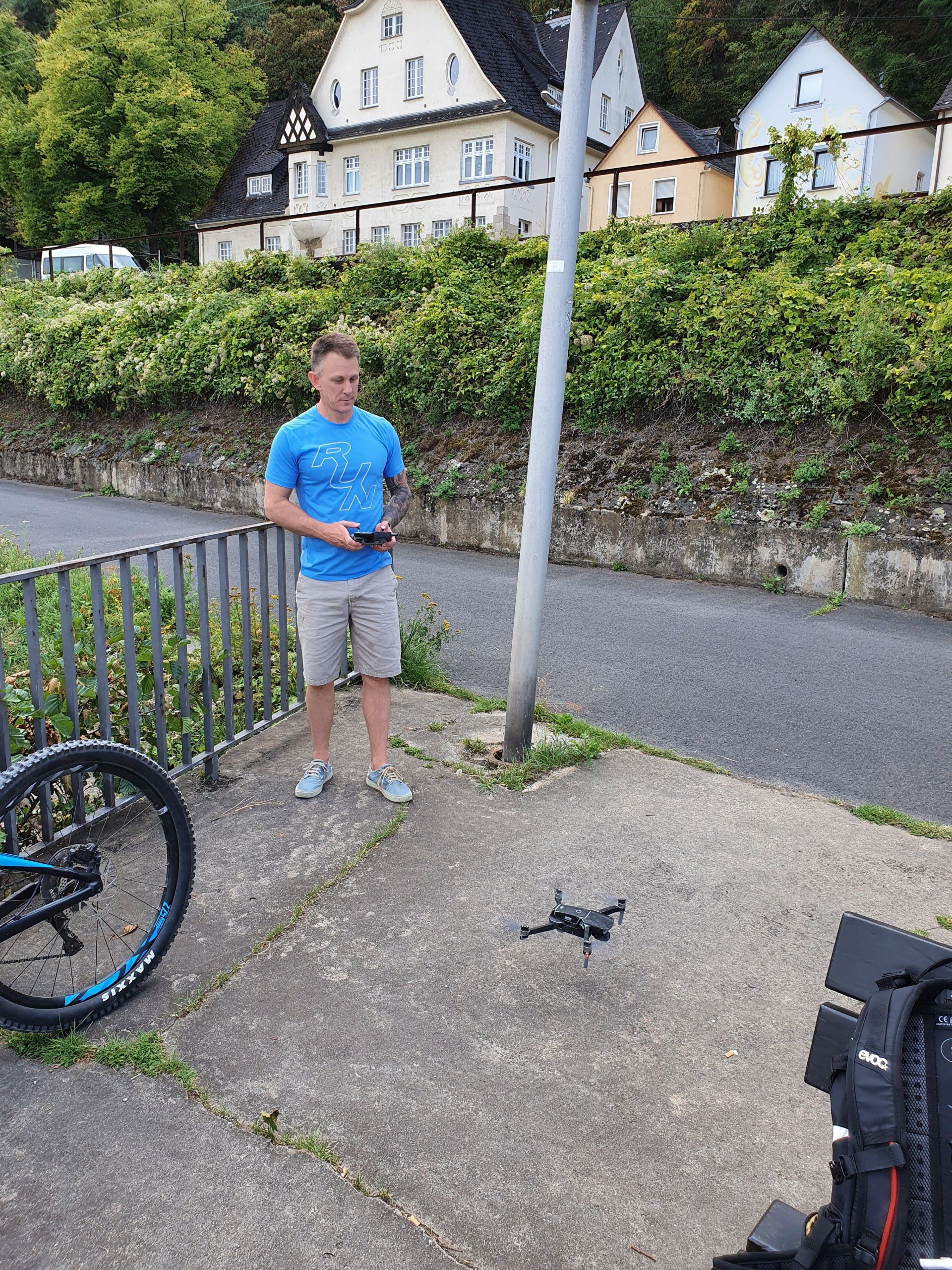 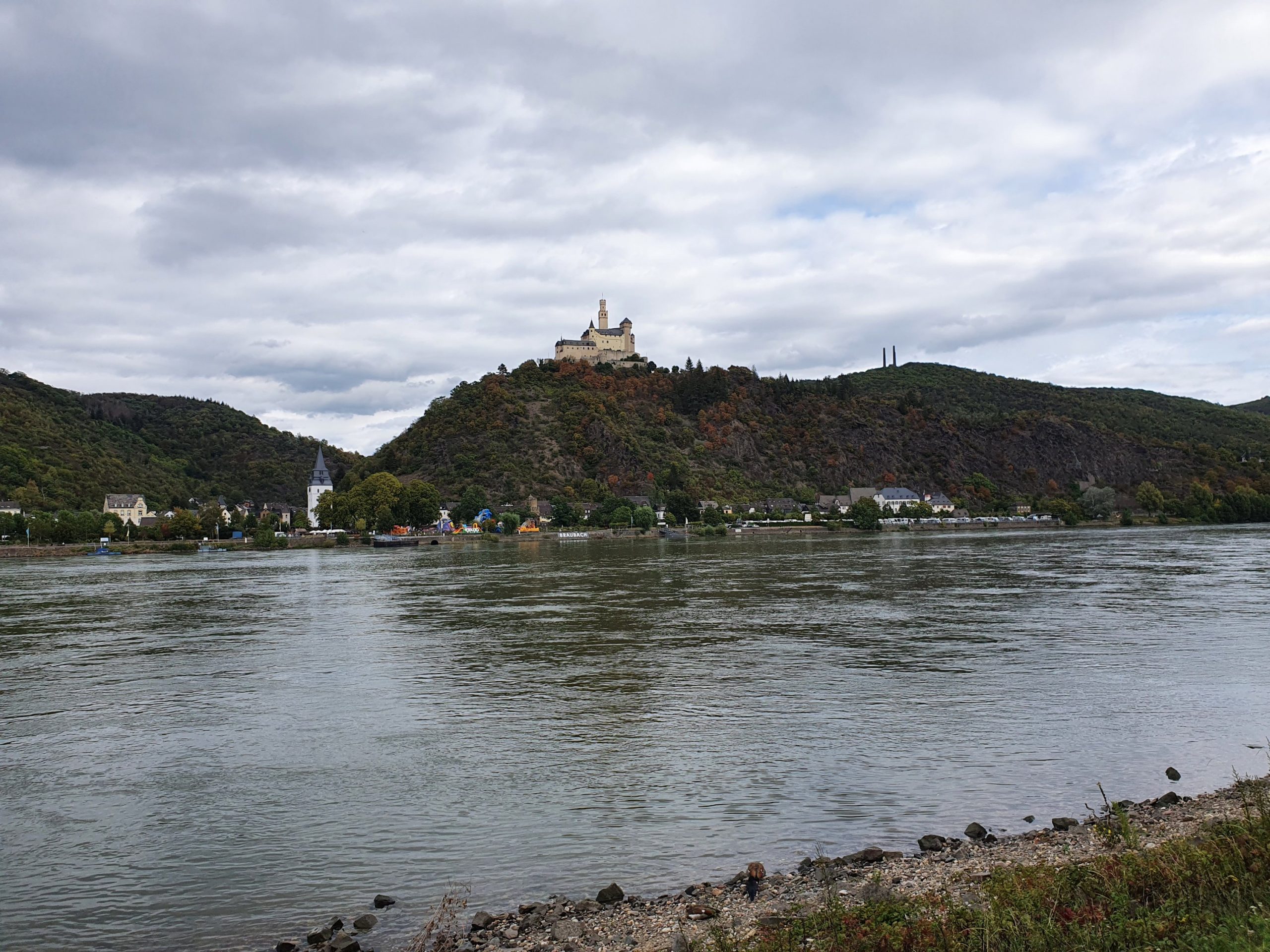 After about a 1hr 20min, we finished our first leg of 13 miles from Koblenz to Boppard. Once at Boppard, we considered continuing on to St. Goar, and returning by train back to Boppard that evening. It didn’t quite work out that way, as we took a little too much time admiring this cute village. After parking our bikes and checking in, we decided to spend the rest of the evening hanging around Boppard. 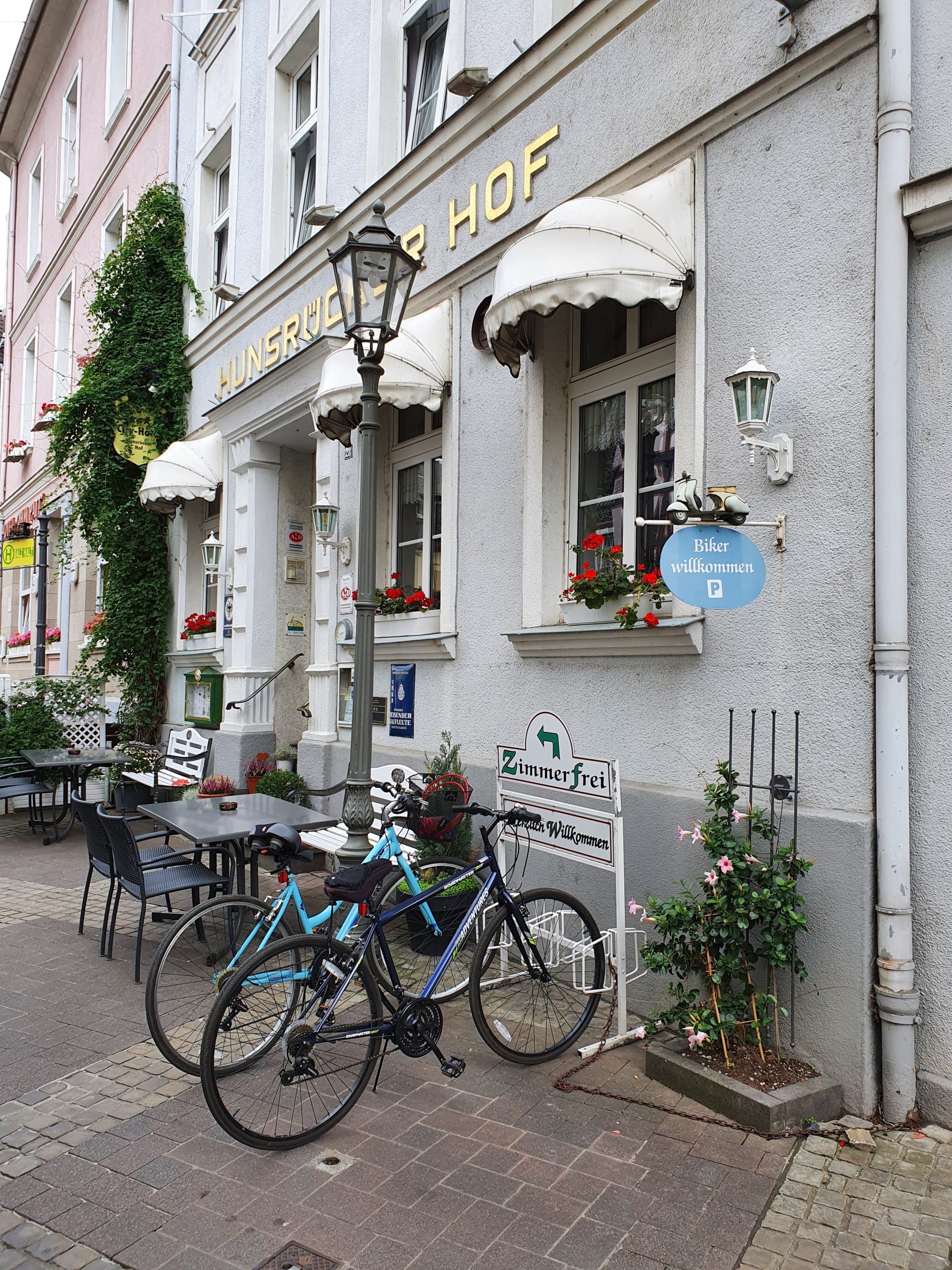 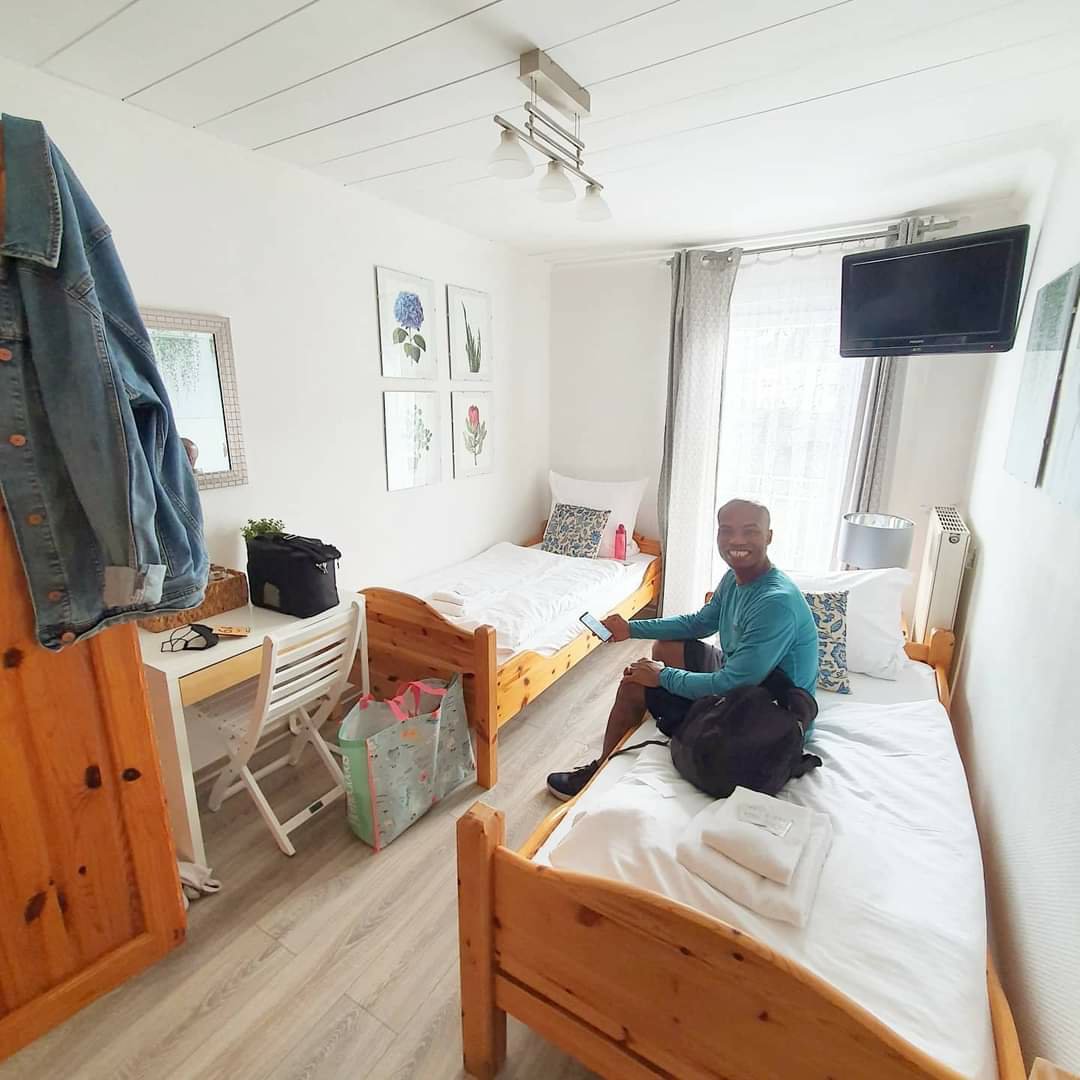 City Hotel Hünsrucker Hof was a perfect place to stay, with just enough space in the room for two of us. The hotel is perfectly tucked into the city, and only a 5 minute walk to Parkhaus Marienberg. The hotel staff proved to be exceptionally friendly and spoke enough English to help get us situated. After checking in, we walked around to admire this surprisingly adorable village. Our favorite spot in town was the Karmeliterkirche situated in the town center. We had plans to ride the Sesselbahn chairlift to a hilltop that gives way to amazing river bend views. Unfortunately, we were tired, hungry, and it was getting a little late. 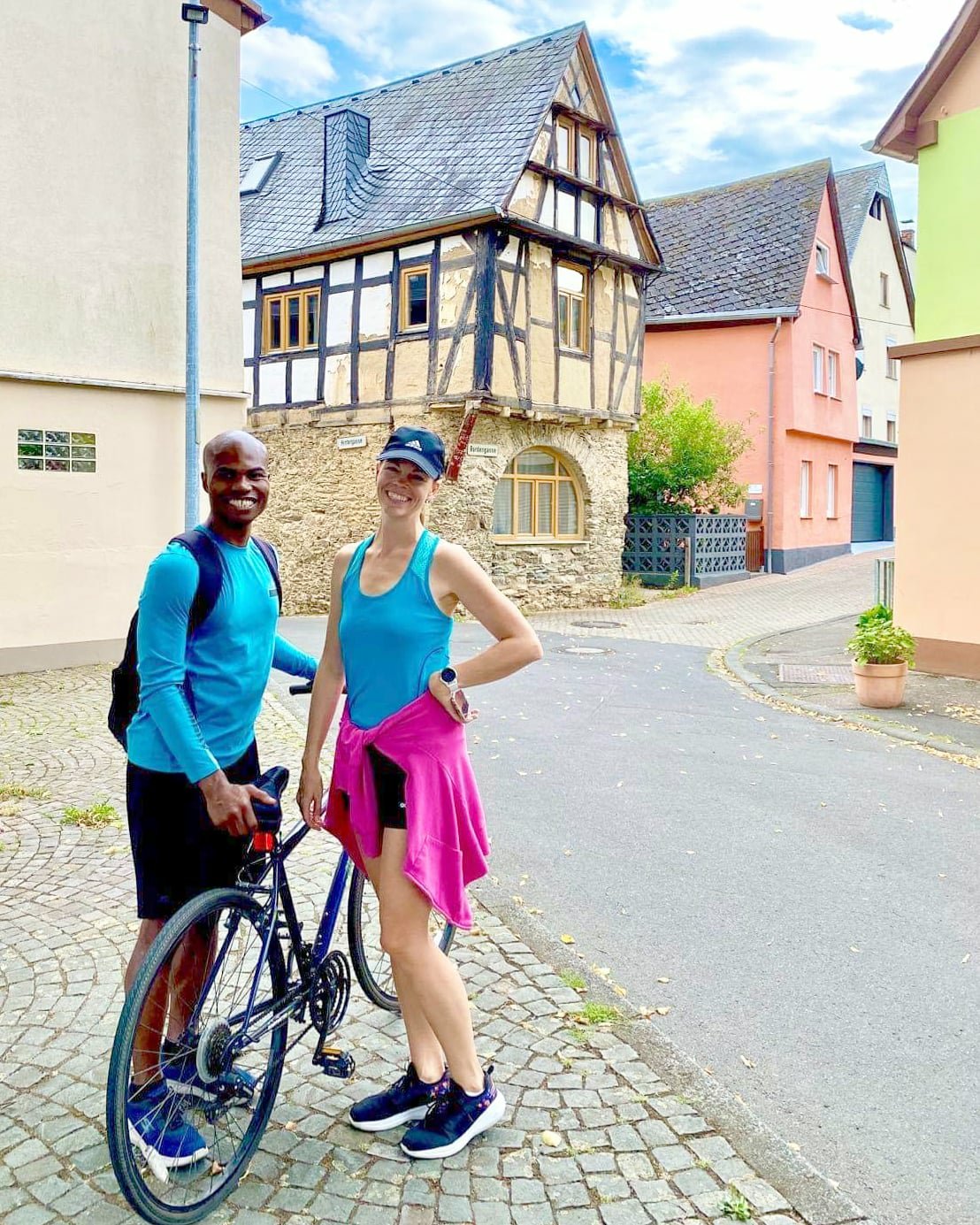 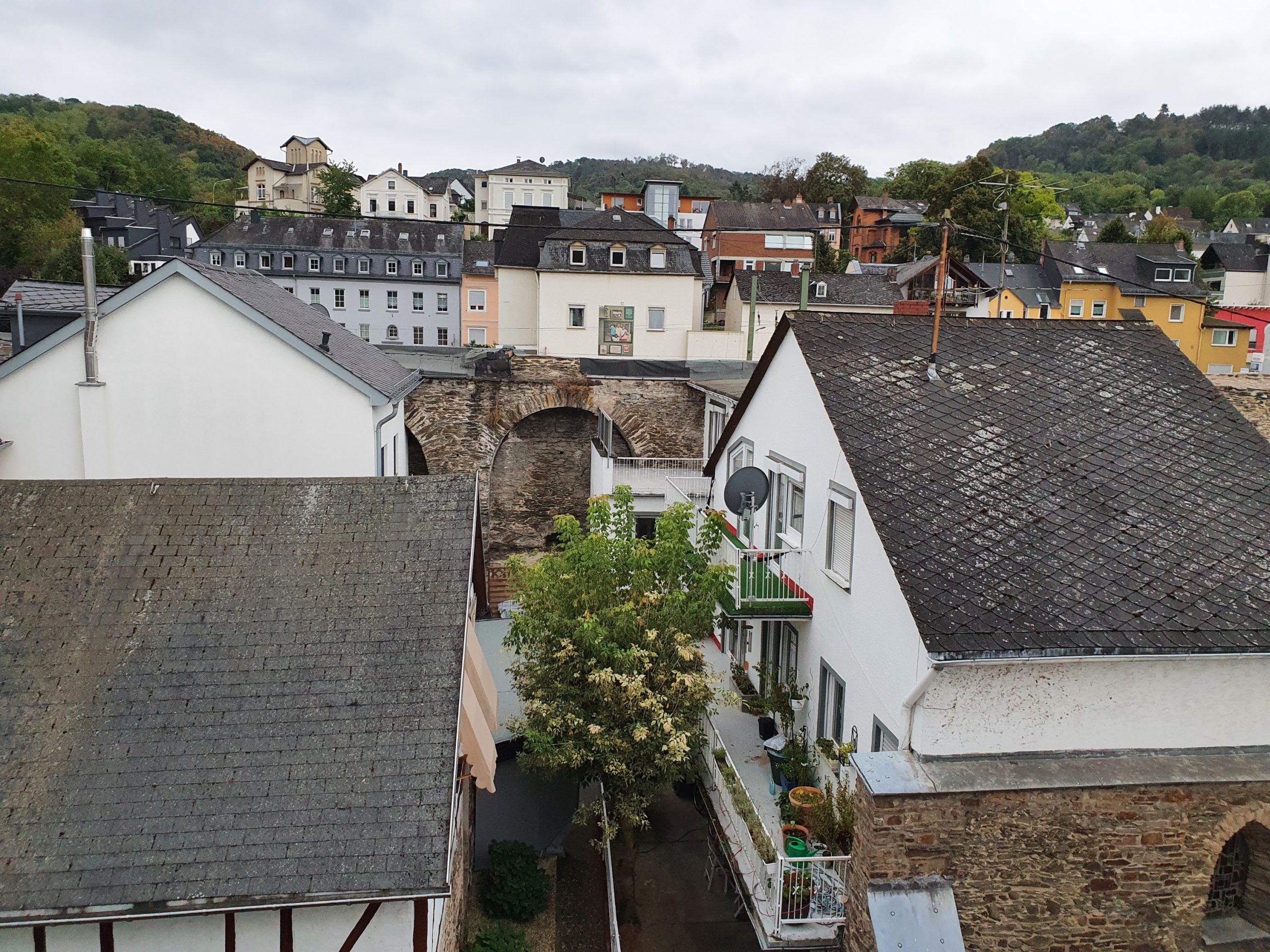 There are plenty of places to eat in town, but we opted for a cute Italian restaurant tucked away from the main touristy area. After spending a few hours indulging in pizza, pasta, and drinks, we decided to stroll down the Rhine to work off our heavy meal. From a distance, we could hear live music, so we naturally walked in that direction. We arrived to Hotel 571 Winzerkeller Sportsbar, which featured a band playing classic American rock music. Instead of having patrons packed into a bar, they had tables out on the lawn, ensuring visitors maintained social distancing. We sat there for an hour, enjoying some classic rock and Pils before leisurely strolling back to the hotel. 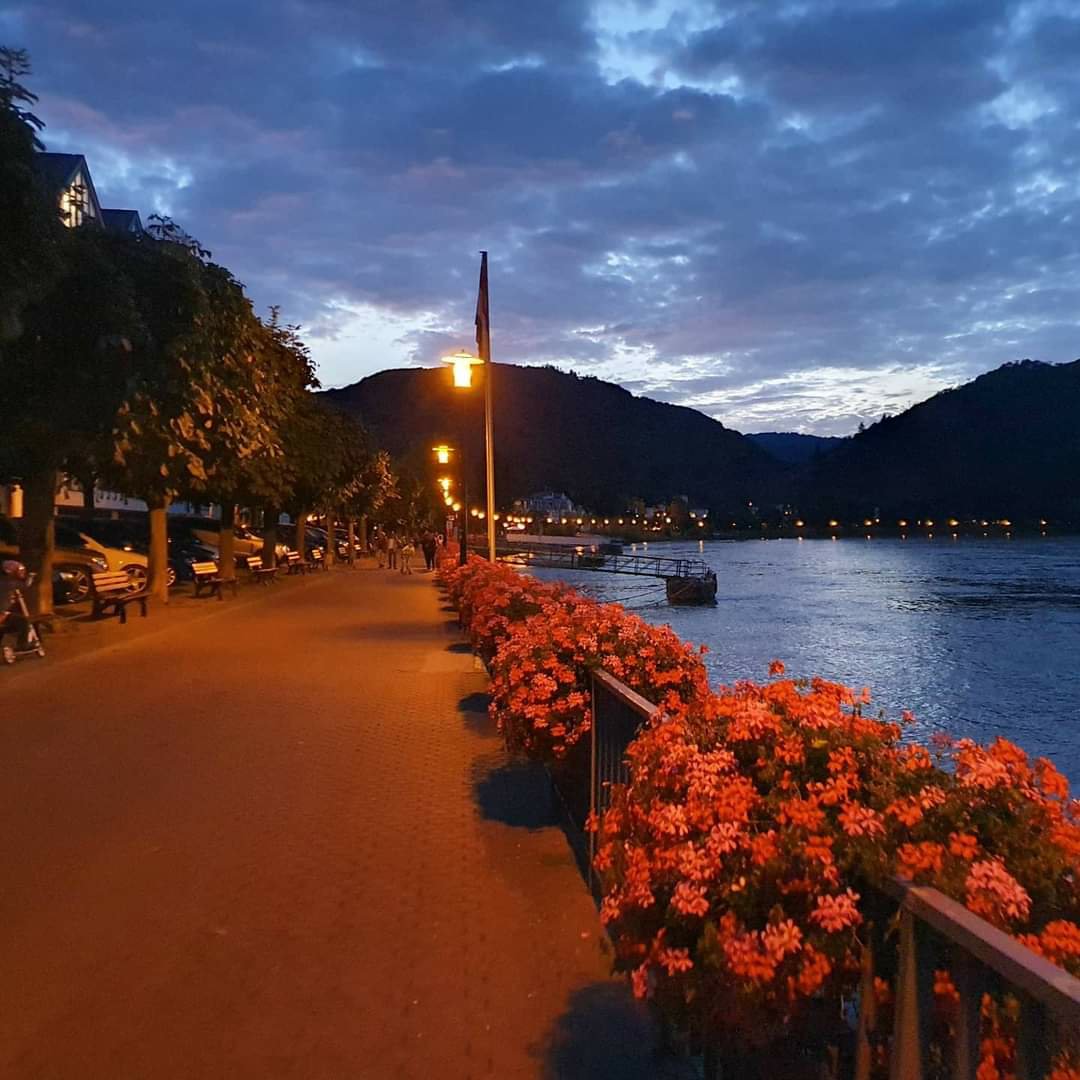 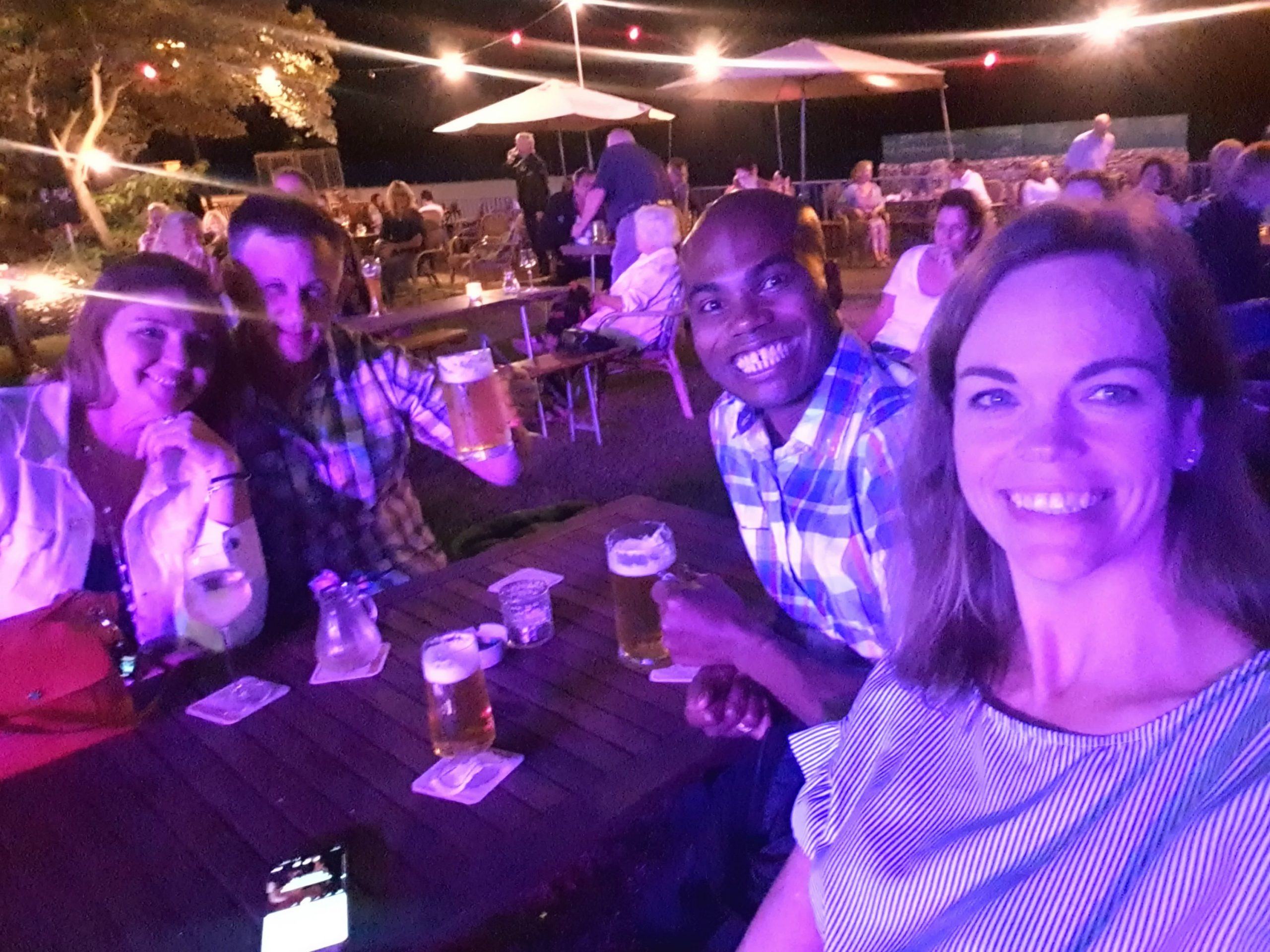 We began day two with a tasty breakfast buffet in the hotel before checking out. After loading our luggage into our vehicles, we took the train from the Boppard Main Train Station to Bacharach. After a short train ride, we were off on the second leg of our journey. As the day prior, we continued to marvel at the castles along the Rhine, including the iconic Pfalzgrafenstein Castle, situated on a small island in the Rhine. After just over eight miles and 45 minutes, we reached our lunchtime destination, St. Goar. 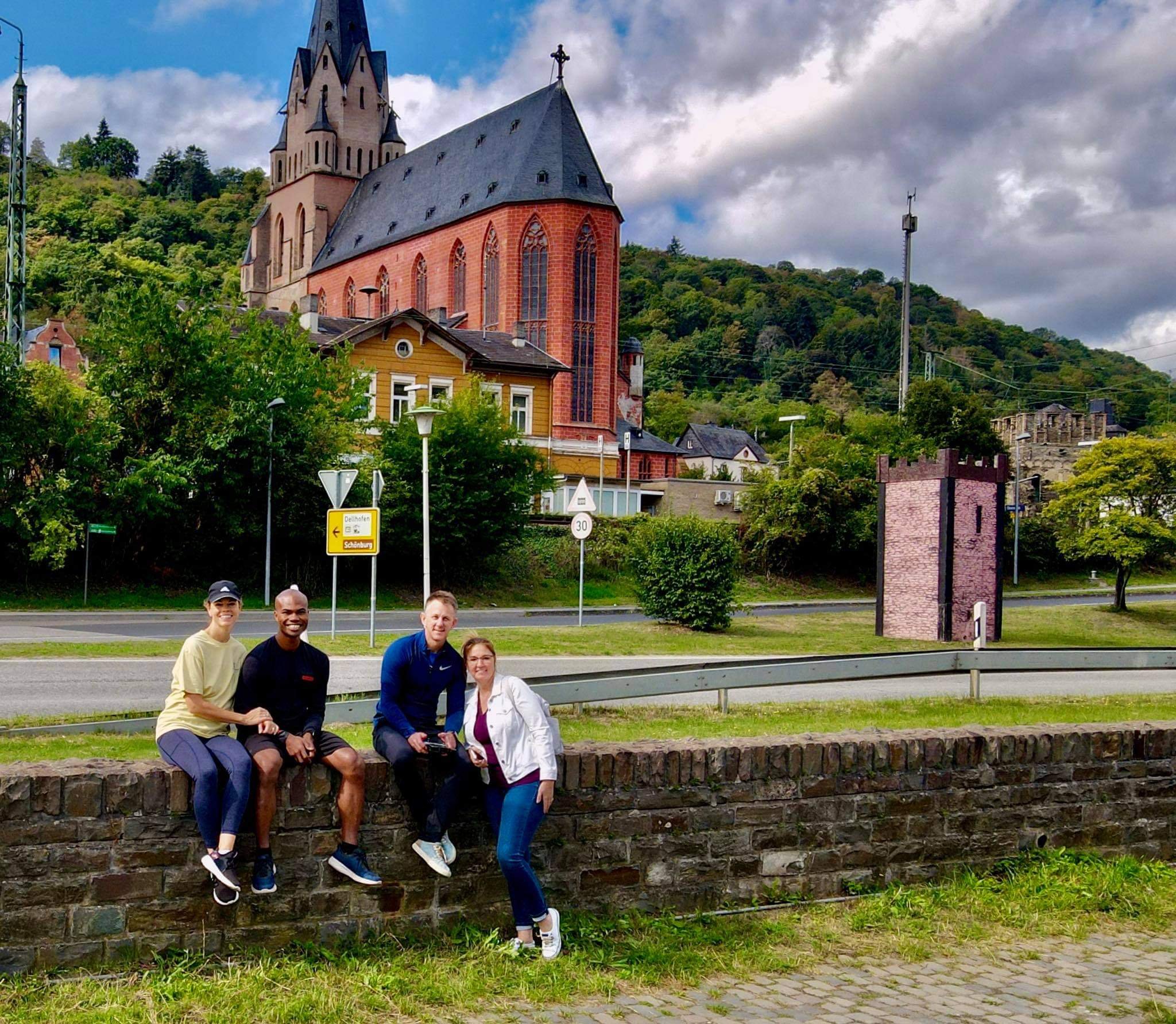 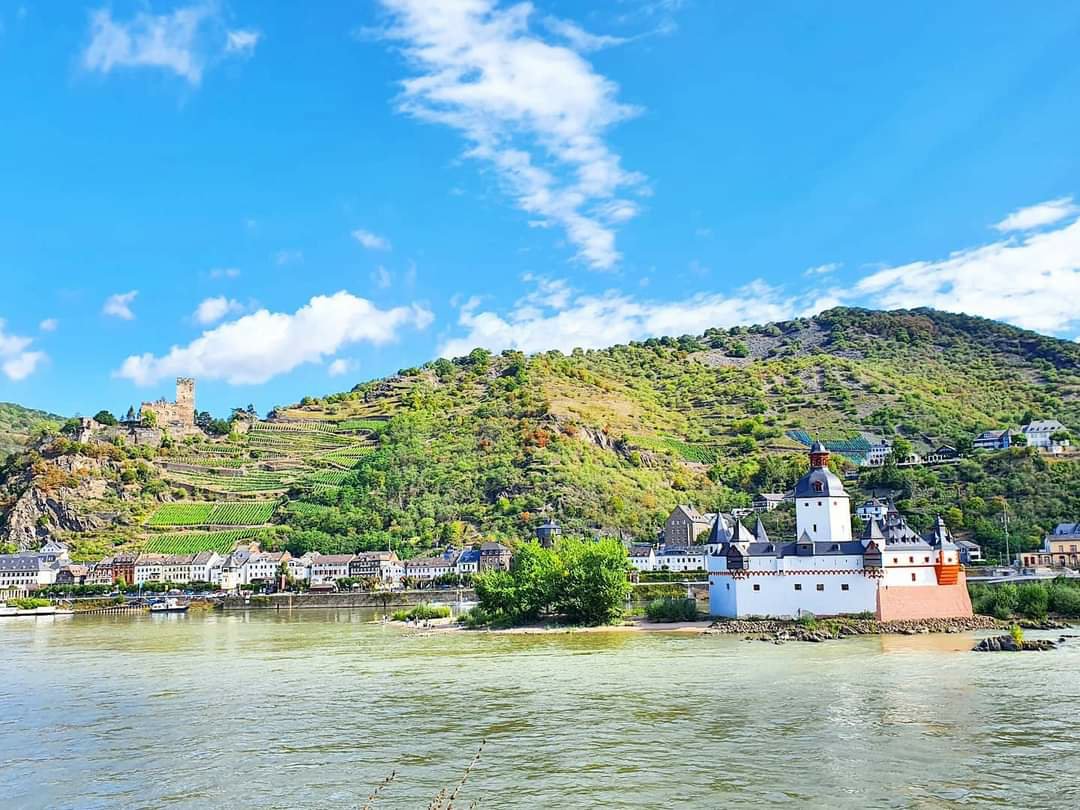 I always love visiting St. Goar, which is usually one of our destinations on a Rhine River cruise. It’s hard to think of a more perfect Rhine village, as you can relax in the village center along the Rhine, followed by strolling down Heerstraße and gazing at Rheinfels Castle that overlooks the town. We had lunch in the village center along the Rhine, sitting outside and admiring Stiftskirche while we ate. After lunch, we grabbed gelato nearby before stumbling into a wine tasting event at Stefan Weinmarkt. We spent about half an hour chatting with Stefan, sampling some of his locally made wine, and of course walking away with a few bottles we purchased. 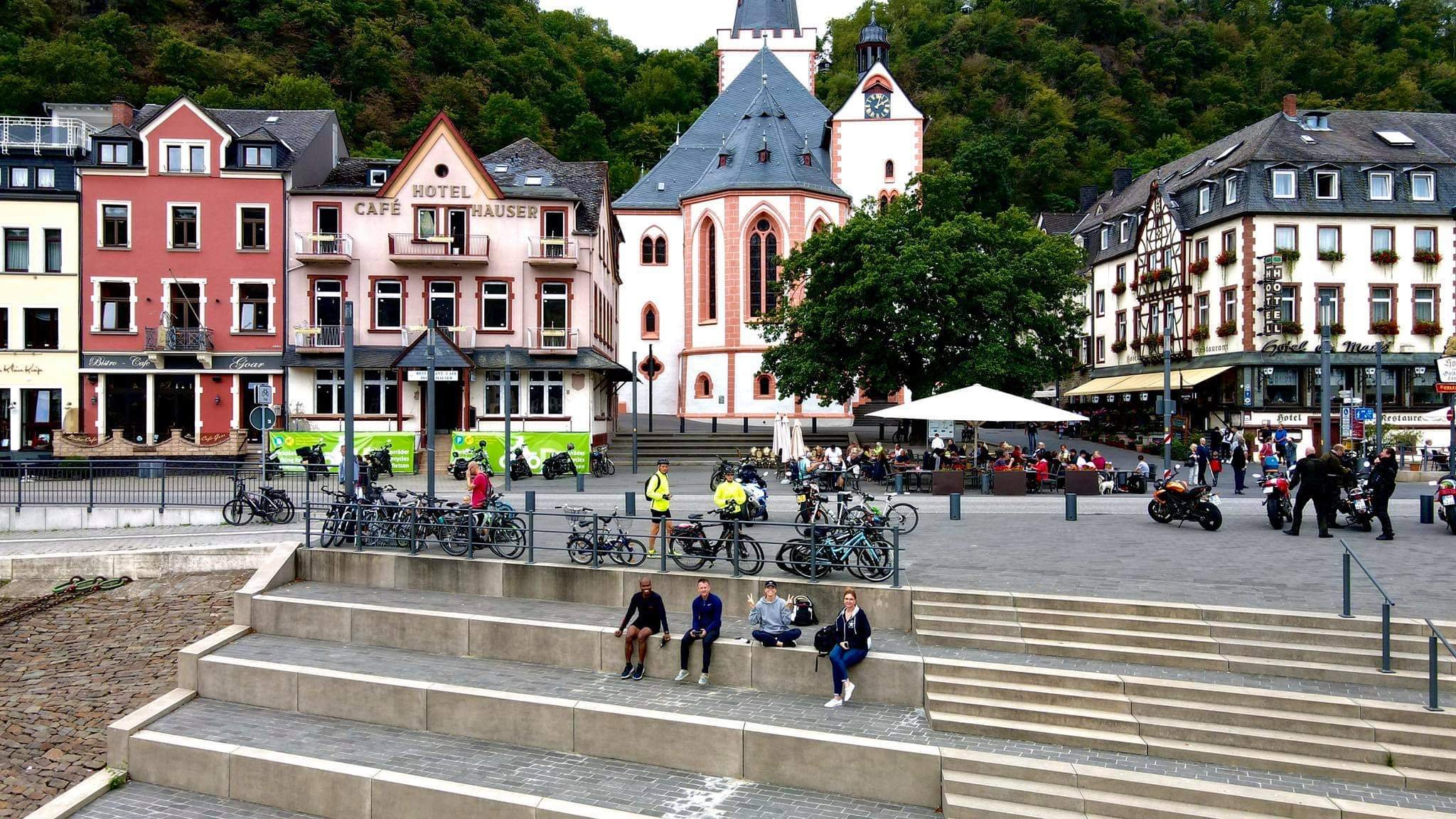 After our leisurely stop in St. Goar, the last leg of our ride was a nine mile and 50 minute ride back to Boppard. We were tired after two full days of exploring the Rhine, and ready for the journey back home. 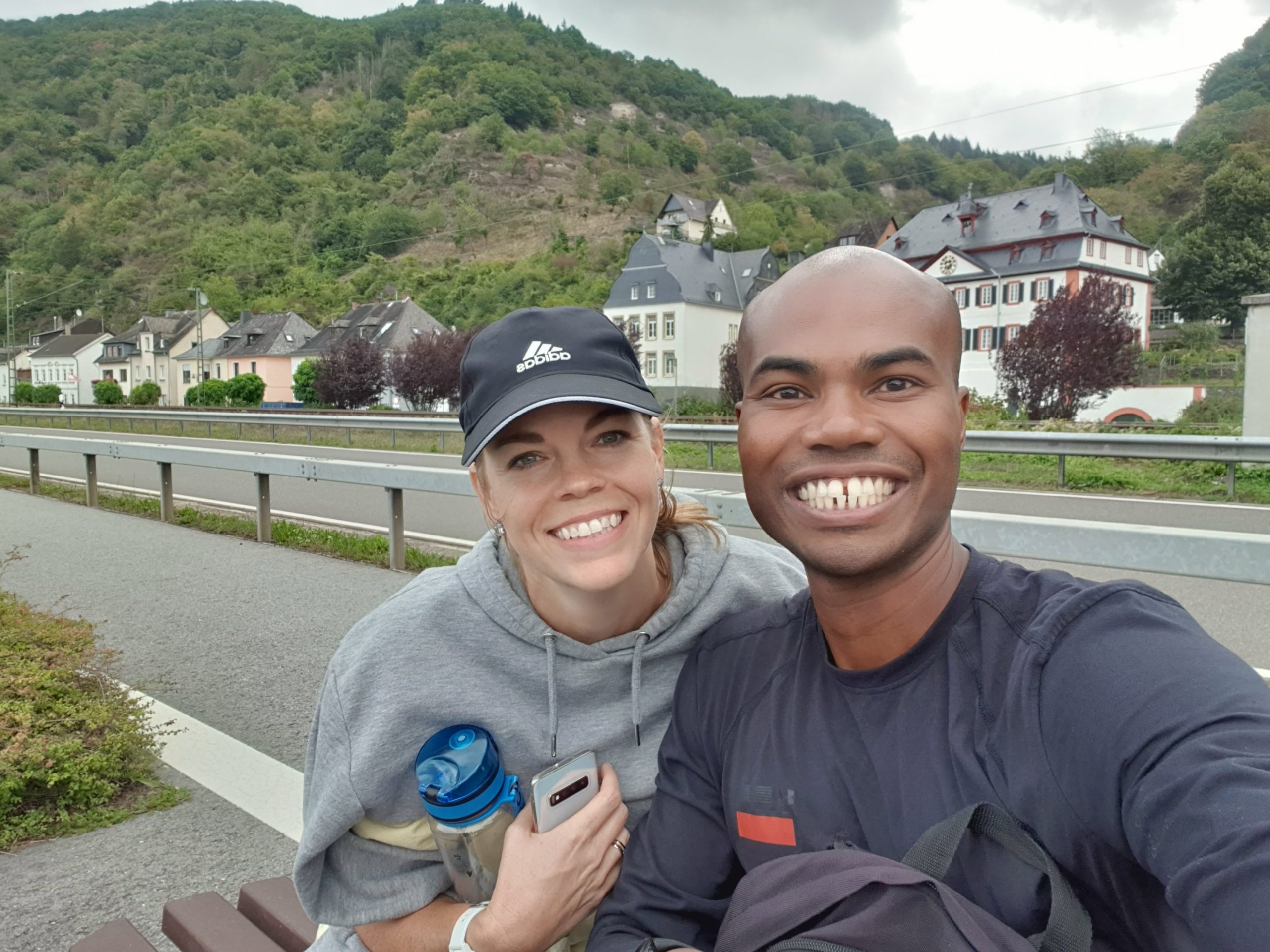 The Rhine River is the perfect playground if you’re looking for an outdoor adventure, and it’s such an easy and short drive from Kaiserslautern. Since we’ve moved to Germany, we’ve explored the picturesque Rhine villages, hiked the vineyards, roamed the castle ruins, relaxed on a river cruise, and now biked every bit of the bike trail spanning from Bingen to Koblenz. Whether you make the Rhine River a day trip or overnight destination, you surely will not be disappointed. We look forward to our next adventure! 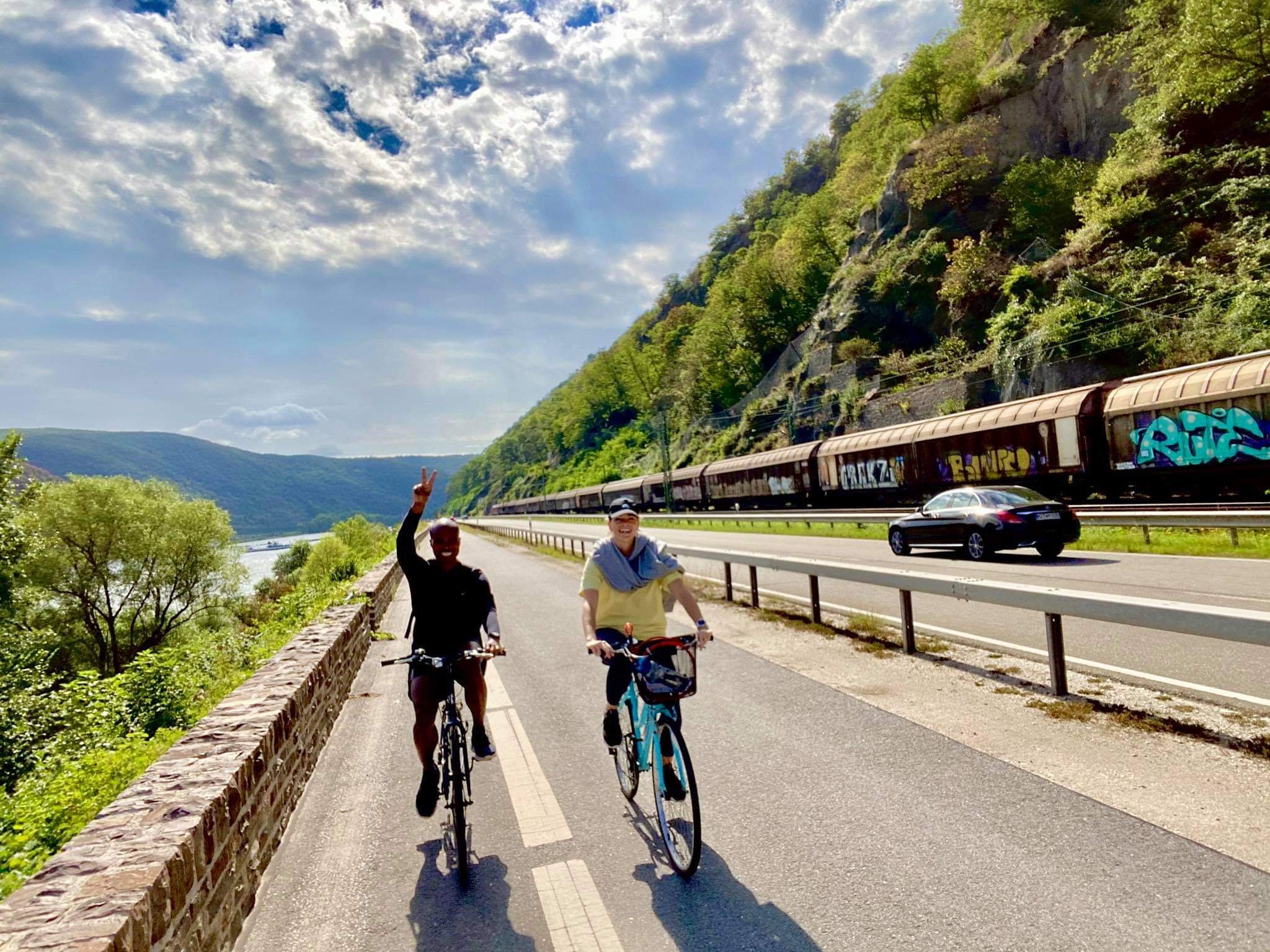