We planned everything perfectly. The Paris Half Marathon was the first of many half-marathons in 2020, and also our first-ever race in France. About a month prior to the race, Nellie had the idea that we should sign up for the Paris Half. We figured that we would just make it a short weekend by driving to Paris on Saturday morning and driving back home to Kaiserslautern on Sunday after the half. 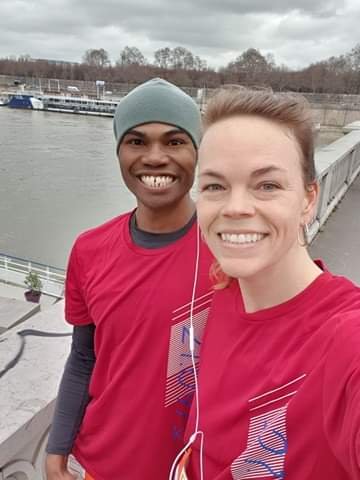 Since it was only a few weeks between registration and race day, we decided to drive instead of taking the train. We rented a small car from Europcar for the weekend, only costing €60. We left at 9am on Saturday morning, arriving into Paris shortly after noon. 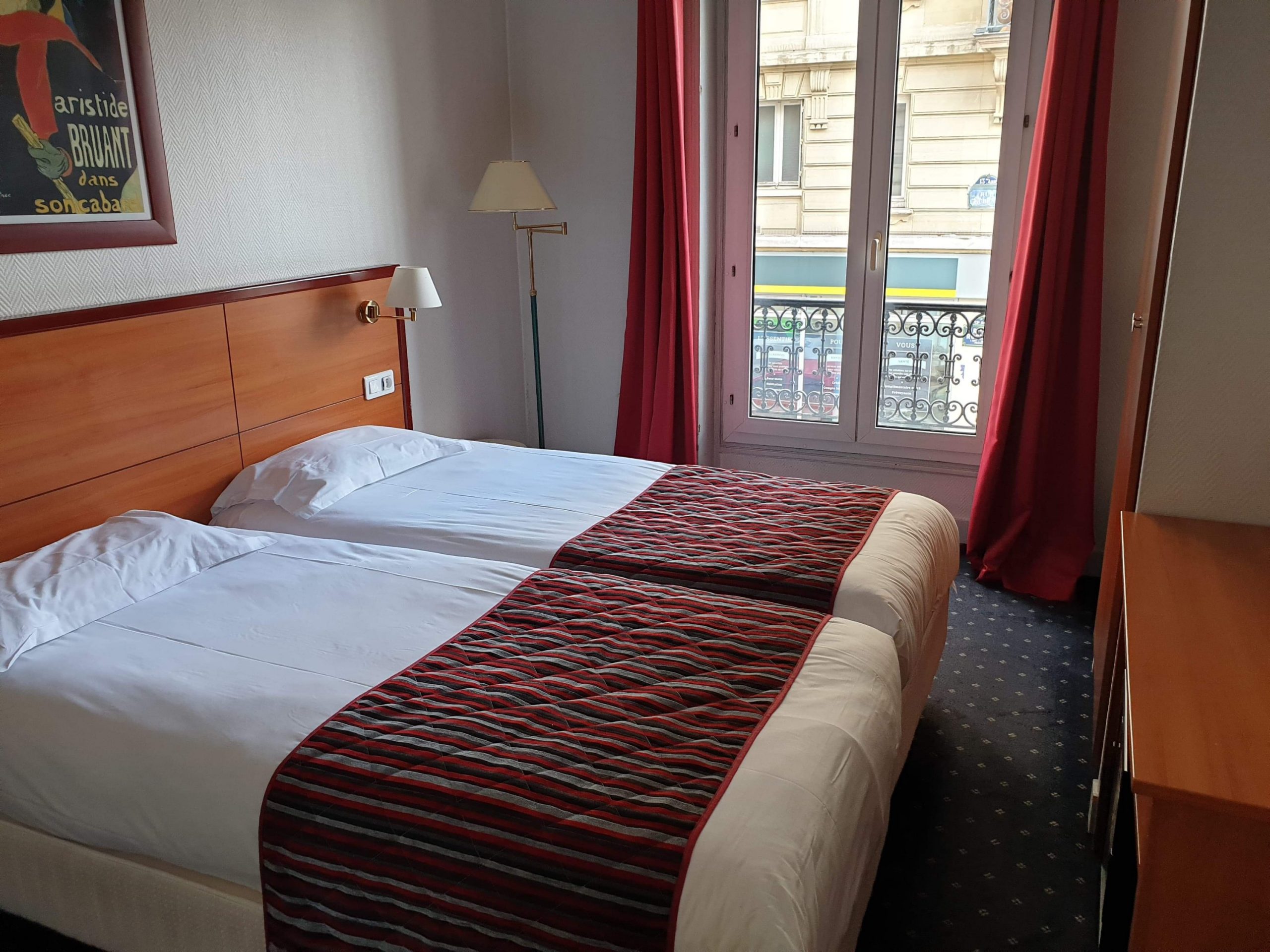 We decided to stay in Hôtel Coypel, located and near Pitié-Salpêtrière University Hospital in the 13th Arrondissement. The hotel wasn’t exceptionally fancy, but it was big enough for the two of us and the staff was friendly. After getting situated, Nellie and I hopped on the nearby metro and headed towards packet pick-up at La Villette. 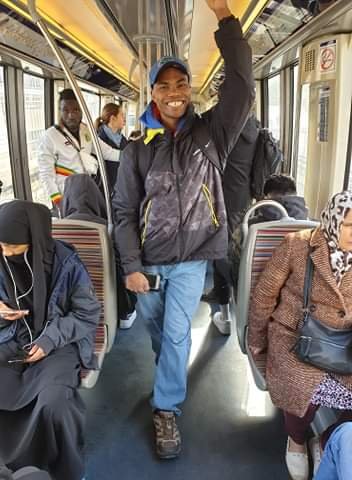 Getting off the metro was exciting as we followed the hordes of runners ready to pick-up their bibs for the next morning’s event. As we walked into the event center, we immediately noticed what seemed to be a cloud of gloom. 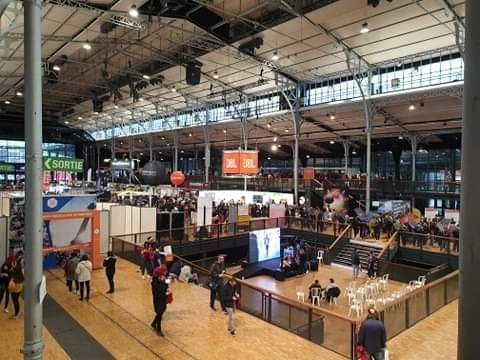 Canceled. We couldn’t believe it. The Paris Half Marathon was canceled. How could they do this? People literally flew all over the world for the event. No one seemed helpful. The questions loomed. Why is it canceled? Will we get a refund? Is it going to be rescheduled? We traveled pretty far to get here, what do we do now? No one knew the answers, and frankly, I don’t think anyone cared. At least they gave us the bib and t-shirt. 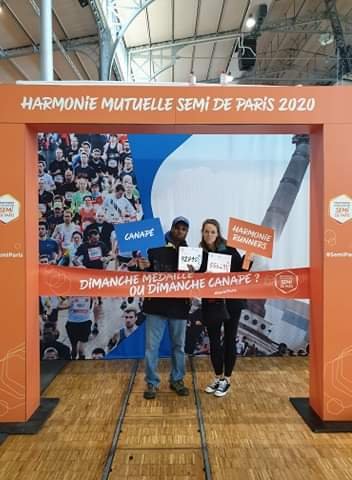 On February 29th, 2020, there were exactly 100 confirmed cases of Coronavirus in the entire country of France. On the same date, there were over 80,000 cases in China and over 1,100 cases in neighboring Italy. This also happened to be the exact date that the French Government banned all events of over 1,000 people. At the time, the Coronavirus didn’t receive the attention that is enjoys from the media today. Sitting here three weeks past the “event” and looking back at it, I can see how the French Government could be concerned about a large gathering of people from across the world. I also believe that the militant French response to the Coronavirus has prevented the virus spreading at the same rate as Italy, Germany, and the United States. Just my opinion. 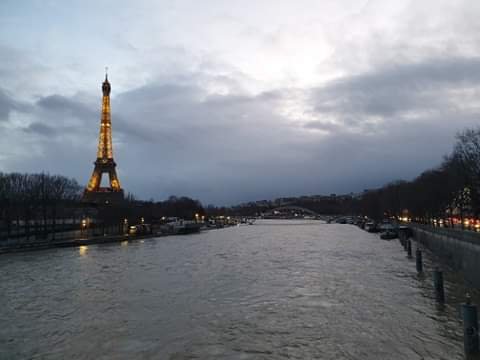 Still, we were in great company of disappointed travelers on the afternoon of February 29th, but we were in Paris. We figured that we would salvage whatever we could out of the trip, so Nellie and I quickly planned what we could do for a one-night trip. We figured that we would just do our “go to” plan of dinner at Café di Roma on the Champs-Elysées, viewing the Eiffel Tower at night, and ending the night with drinks in the Latin Quarter. We did exactly that. 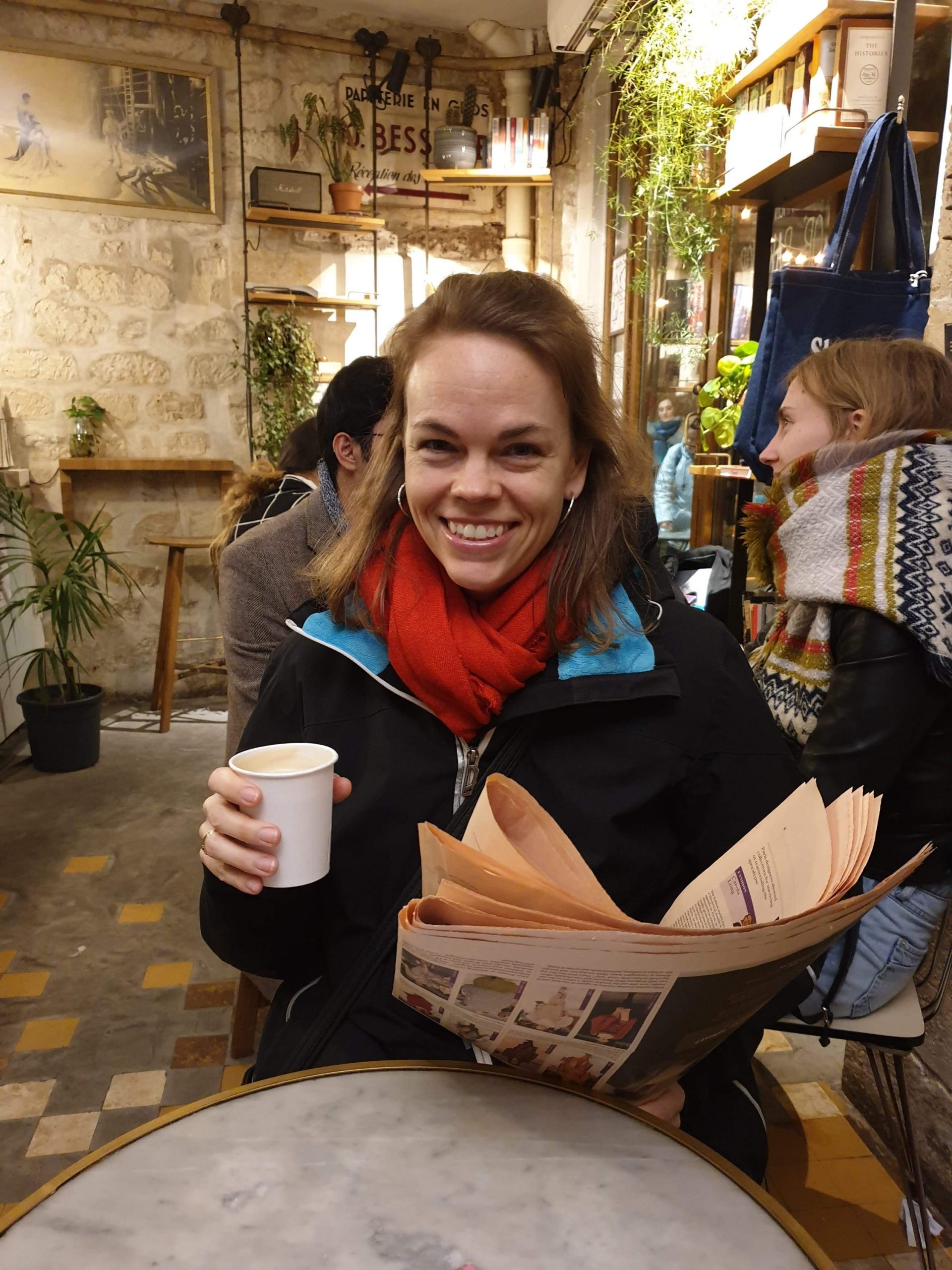 After coffee at the Shakespeare and Company Café in the Latin Quarter, we walked down to Galway Irish Pub for a few drinks. We met a fellow traveler from Kaiserslautern, who also was met with disappointment during packet pick-up. We decided that the next day, we would do our own shadow run of the Paris Half Marathon. After all, we were already in Paris, so why not enjoy a jog around the city. 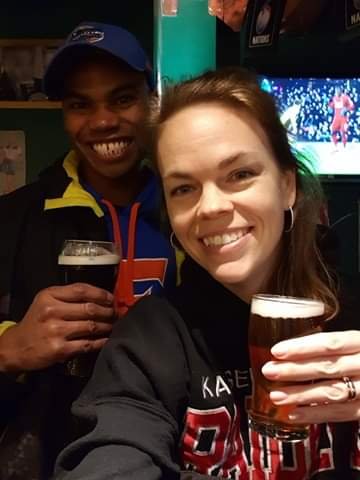 Since we were doing our own shadow run, we were able to head out whenever we felt like it the next morning. That worked well, considering that my corral was scheduled to start an hour and a half before Nellie’s. Our runner-friend met up with us at Hôtel Coypel, and we departed for our own 13.1 mile adventure. Sporting our Paris Half Marathon t-shirts and race bib, we hoped to pass a few other runners on our shadow run as we hit the pavement, with our new friend, at 8am on Sunday morning. 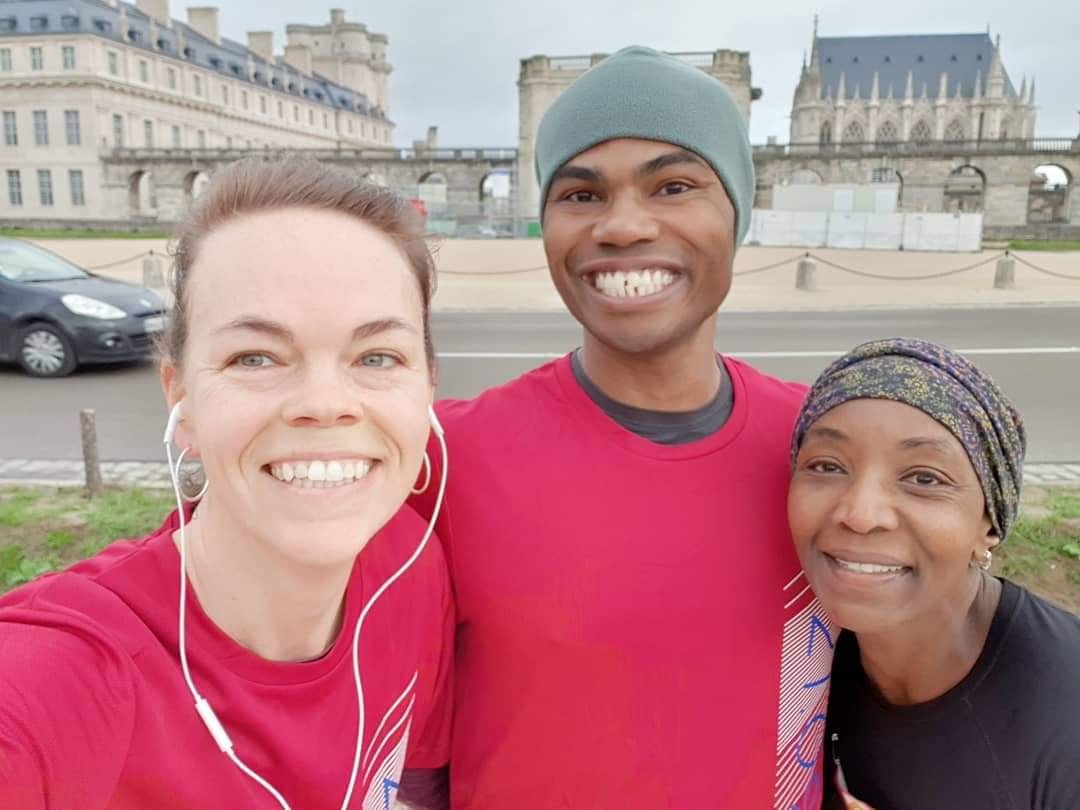 Nellie mapped the race route on her phone, which was easy to follow since it went around the 36 acre Paris Zoological Park. We were thrilled to run in an area of Paris we’ve never discovered, which included running by the 12th Century fortress Château de Vincennes. 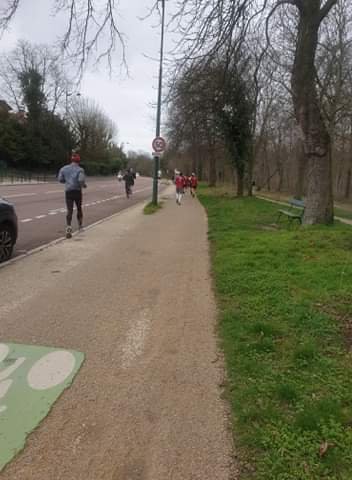 About an hour into the run, we started passing hordes of other runners who decided to run their own shadow run. We traded high-fives and cheers as we passed hundreds of other runners on the same route. When we finally reached what would’ve been the finish line, there were dozens of runners cheering and taking pictures of the “finishers.” 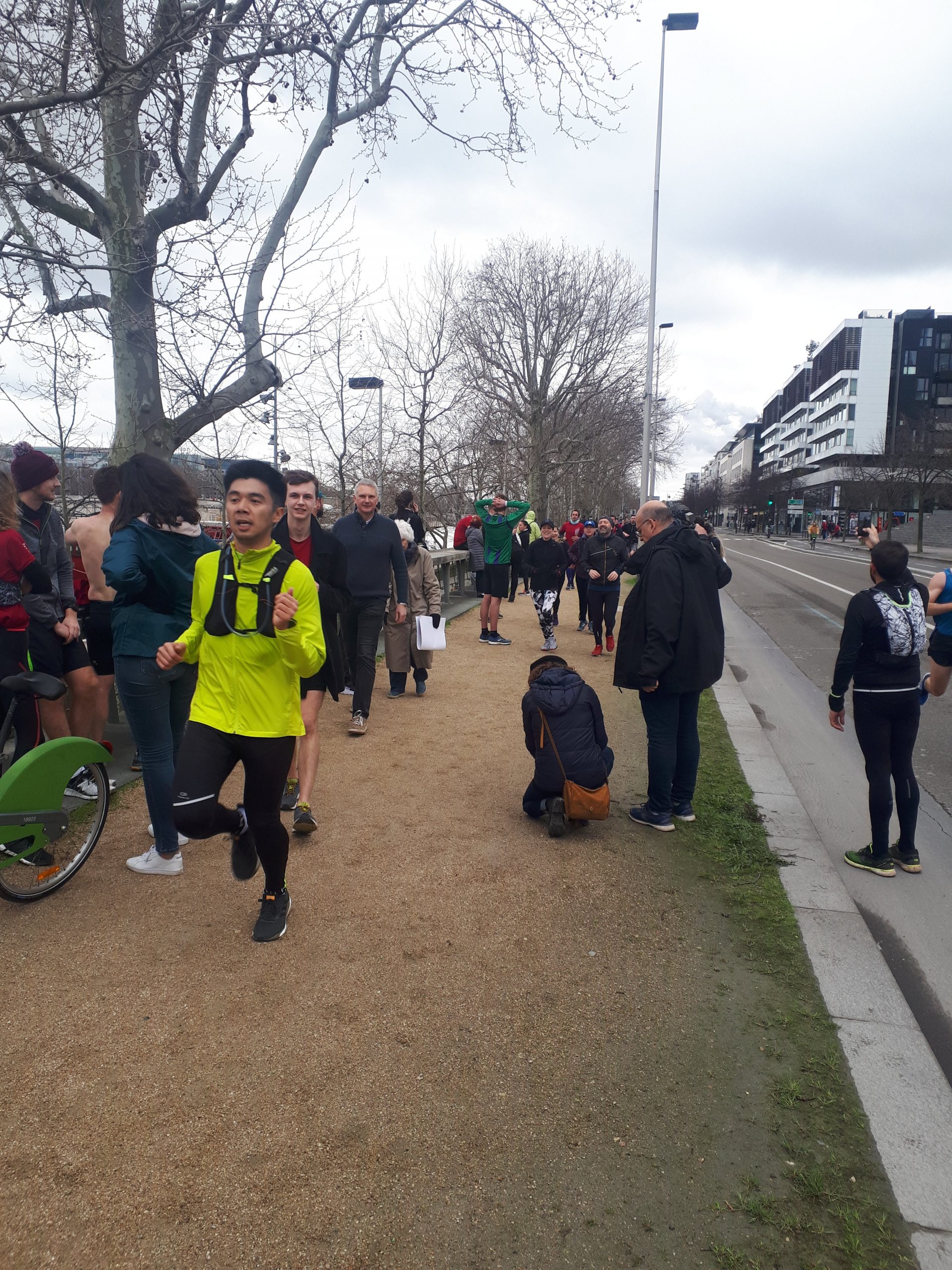 Before I get hate mail for writing this, bear mind the social situation at the time. By large, the world had yet to come to grips with the Coronavirus, and there certainly weren’t yet massive travel restrictions. As I write this on March 22nd, there is no way I would participate in a shadow run if it were today. However on a day with only 100 confirmed cases in the country, we were inspired by the hundreds of resilient runners who had their plans dashed by the Coronavirus. 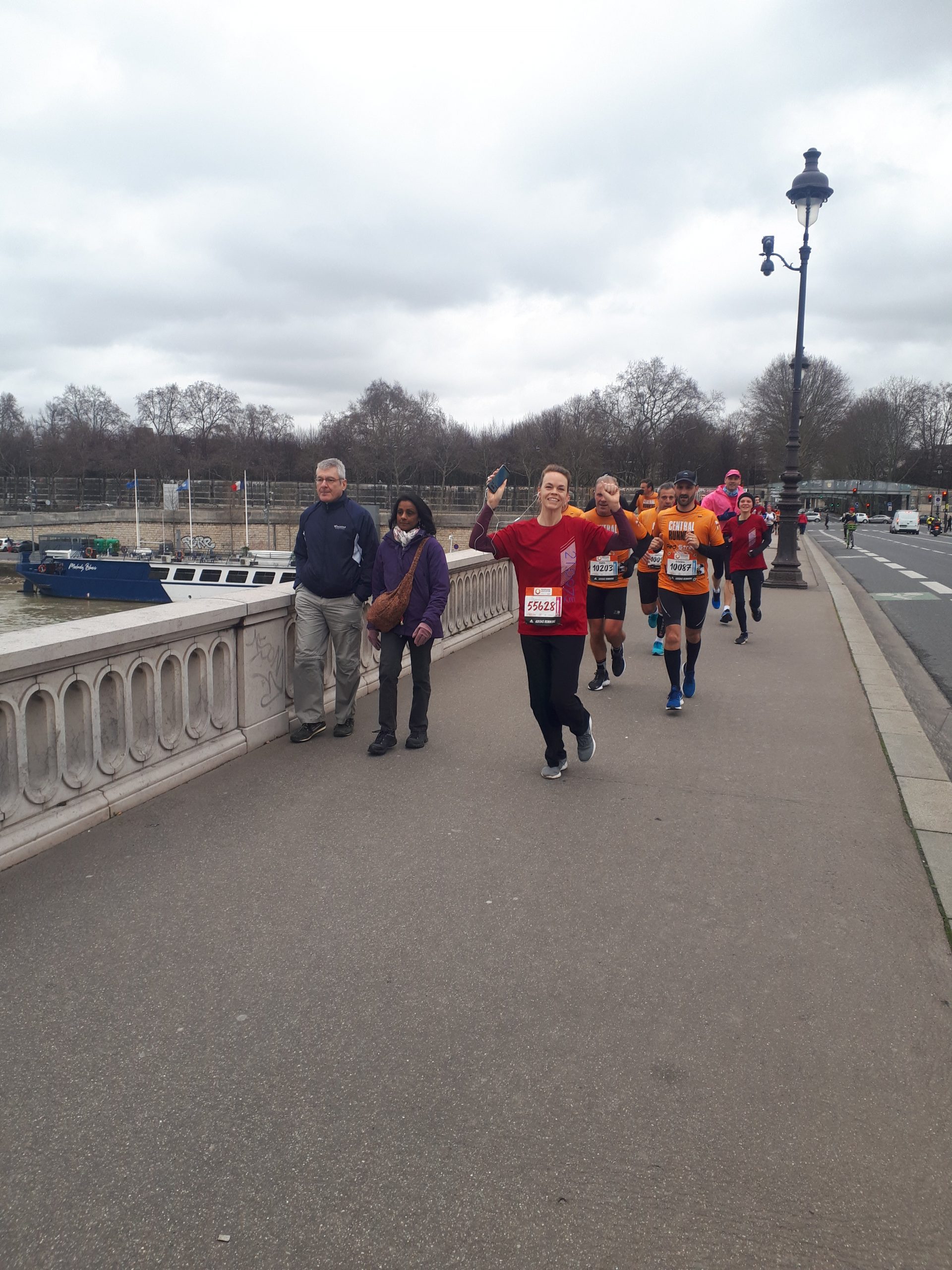 The Paris Half Marathon is now for September 6th, and with luck we’ll be able to make the rescheduled event. The Disney Paris Half Marathon is three weeks later, so our race calendar is quickly filling up for the fall. As our time in Europe rapidly comes to a close, we hope the Coronavirus quickly passes so life can resume as usual! 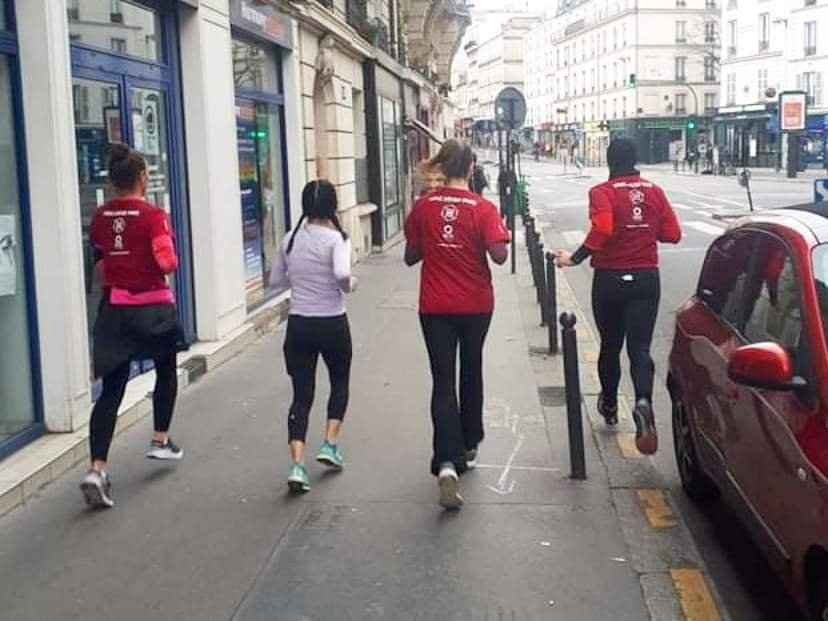