I personally don’t find it enjoyable centering an entire day on a single Christmas Market. With so many out there to enjoy, I almost feel that spending so much time at one market is cheating me from seeing another. So why not see as many as possible in a single day, right?

Since most Christmas Markets opened Thanksgiving weekend, we decided to do the Five Christmas Market Challenge by train. To tell the truth, the challenge seemed much easier in thought than it felt in execution. While we had a great time bonding with friends over Glühwein and train rides, it did feel like five Christmas Markets was a little too much. At most of the markets, it seemed like we barely were able to grab a drink and a crepe before we had to make our way back to the train station. Needless to say, the desire for a challenge was better than the experience at each market.

I say all the above, because if you want to do five Christmas Markets in a single day as a challenge, then have at it! If you really want to enjoy yourself and not feel like you are constantly walking, two or three in a day may be more appropriate. With that said, I hope to share with you in this post the good and the ugly of each market, keeping in mind we averaged only an hour at each Christmas Market. Maybe you’ll be inspired to do your own five market challenge, or maybe something in between one and four.

For our trip, Nellie and I purchased the Rheinland-Pfalz day ticket using the DB Navigator app. I purchased and saved the ticket on my phone, and had no issues for the multiple times we were checked by the train inspector. The ticket only cost €30 for both of us to travel all day.

Alternatively, a few of our friends purchased the same ticket at the train station kiosk, and paid the same price. We all parked at the Kaiserslautern Hauptbahnhof for €6 for all day parking. 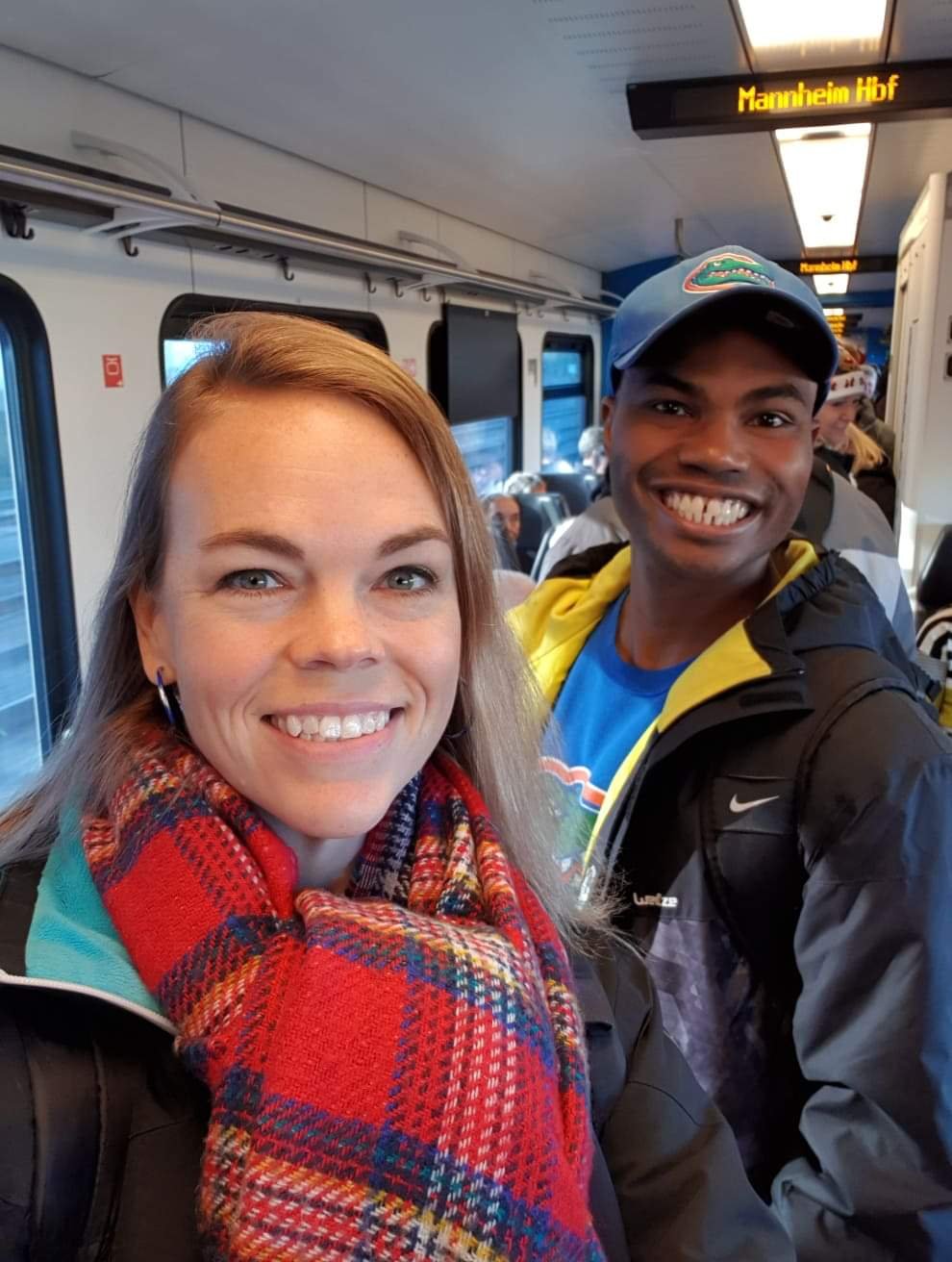 We met our day tripper friends at the Kaiserslautern Hauptbahnhof on a Saturday to hop on the 10:34am Regional Express (RE1), arriving at Neustadt an der Weinstraße just before the Christmas Market opened at 11am. We stood on the jam packed train for the half-hour ride to Neustadt. Once there, we walked 10 minutes to the Marktplatz to visit the Market, which was located right next to the town’s Saturday Farmer’s Market. 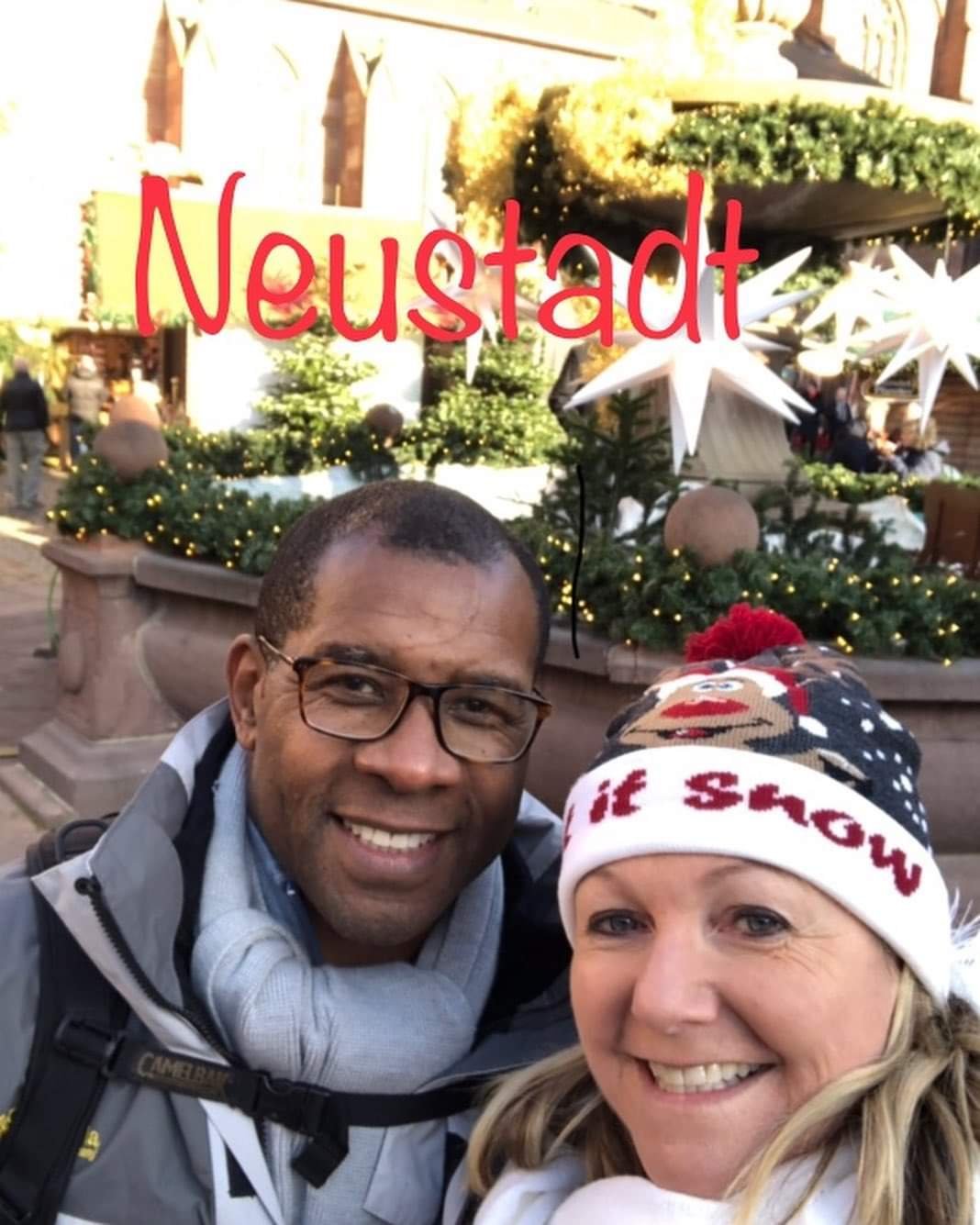 Do you see the couple above? Those are our day tripper friends “George of the Jungle the Saucy Aussie.” They are sad that we never have them on our blog. Now they’re here. 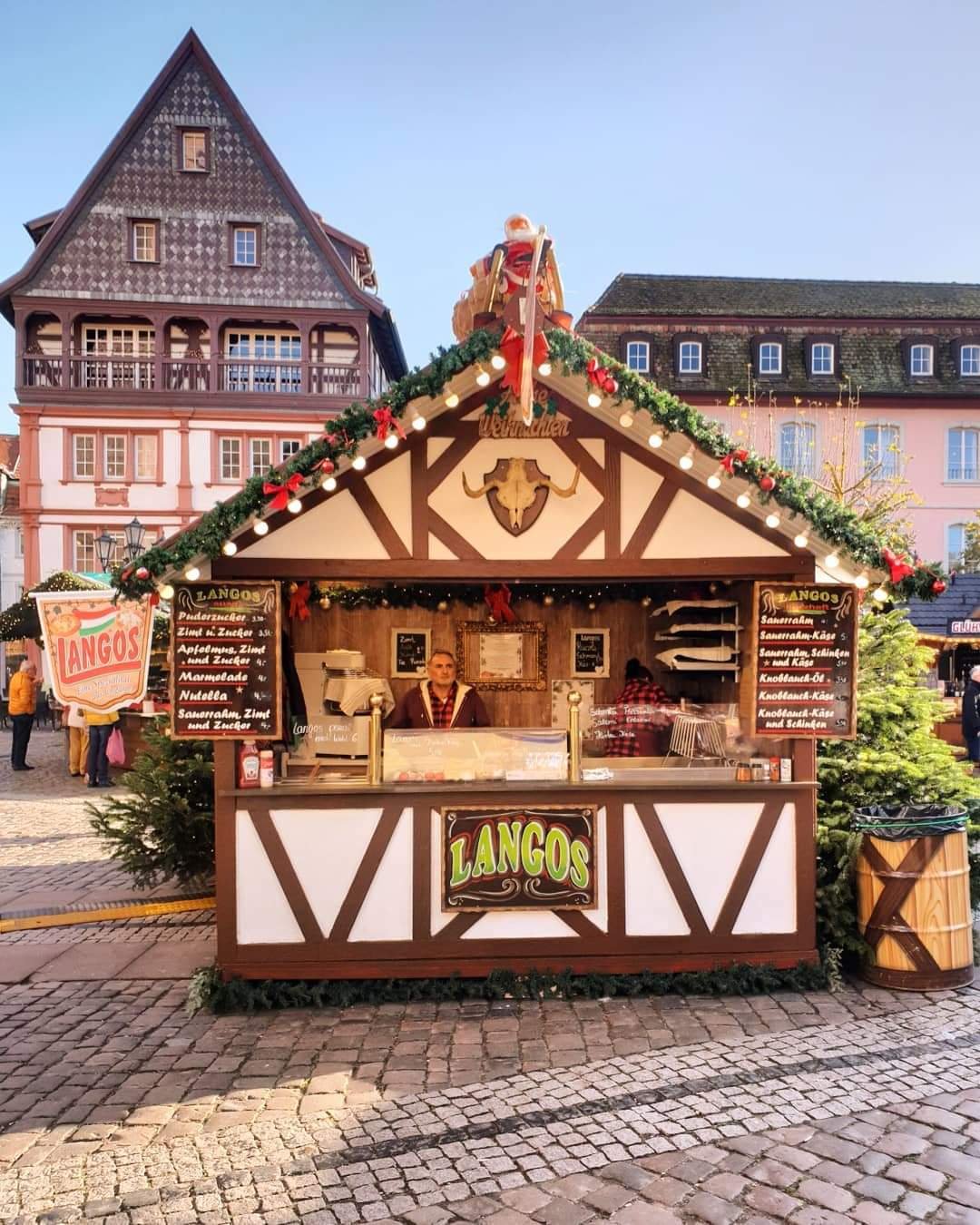 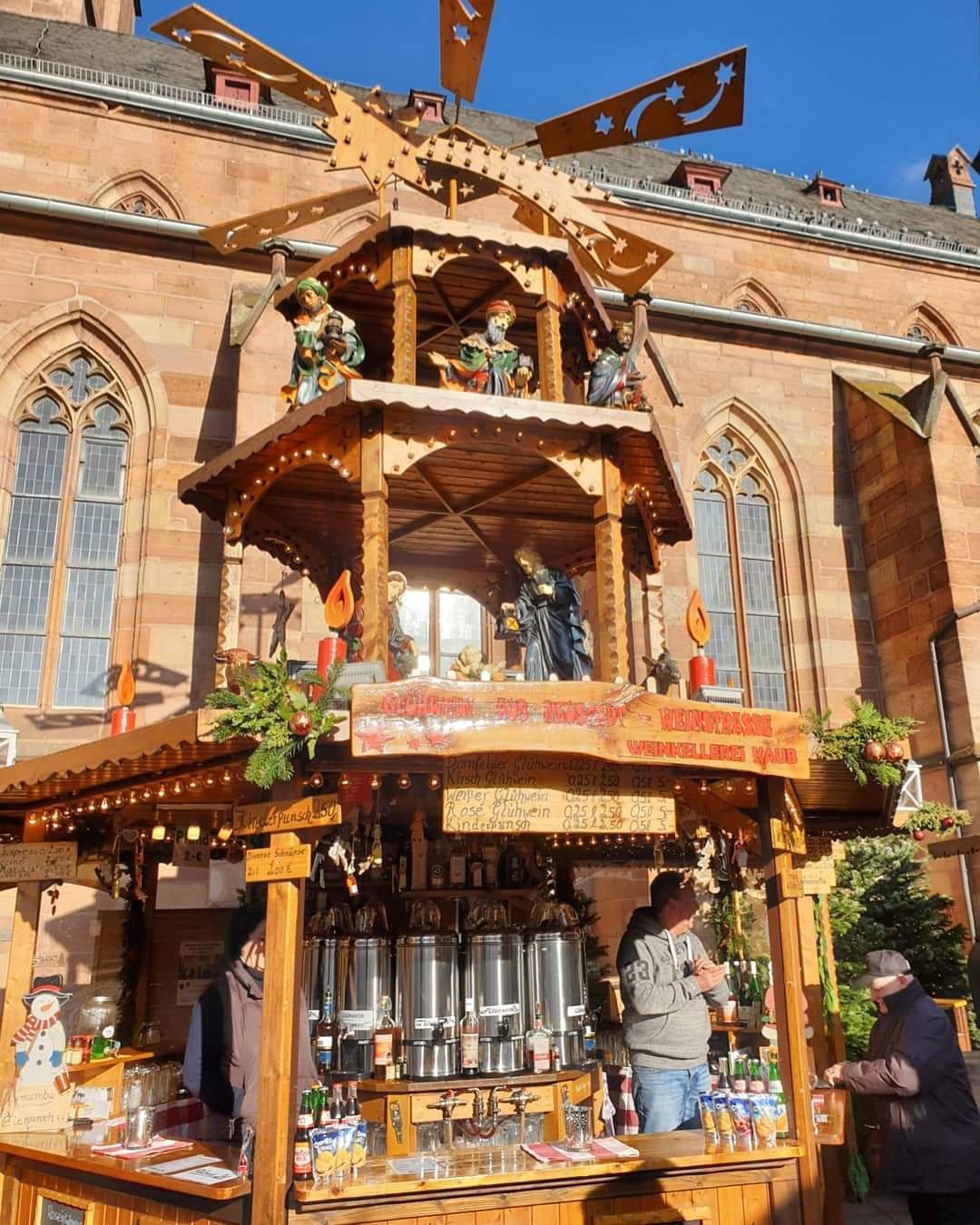 Although quaint, the Neustadt Christmas Market was my favorite of the five we visited. I enjoyed the cozy feeling in one of the most beautiful parts of the town. It was perfect to grab Glühwein from multiple booths, browse vendors, and enjoy the lively atmosphere. Closer to the train station was outdoor ice skating. 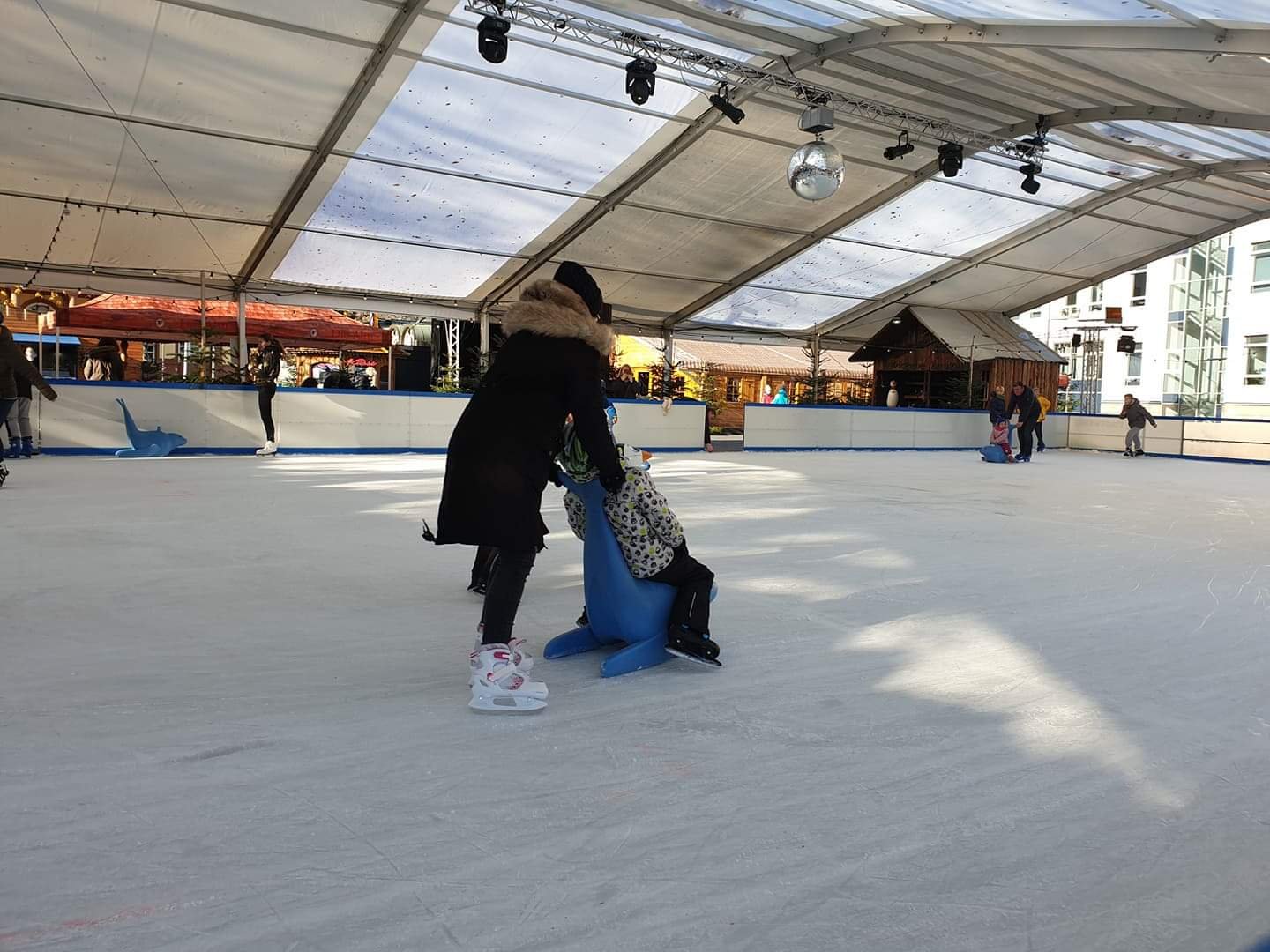 Unfortunately we were only on location for about an hour, but I could’ve easily spent more time strolling through the town. We had to make it back to the station by 12:03pm to continue our journey to Mannheim. 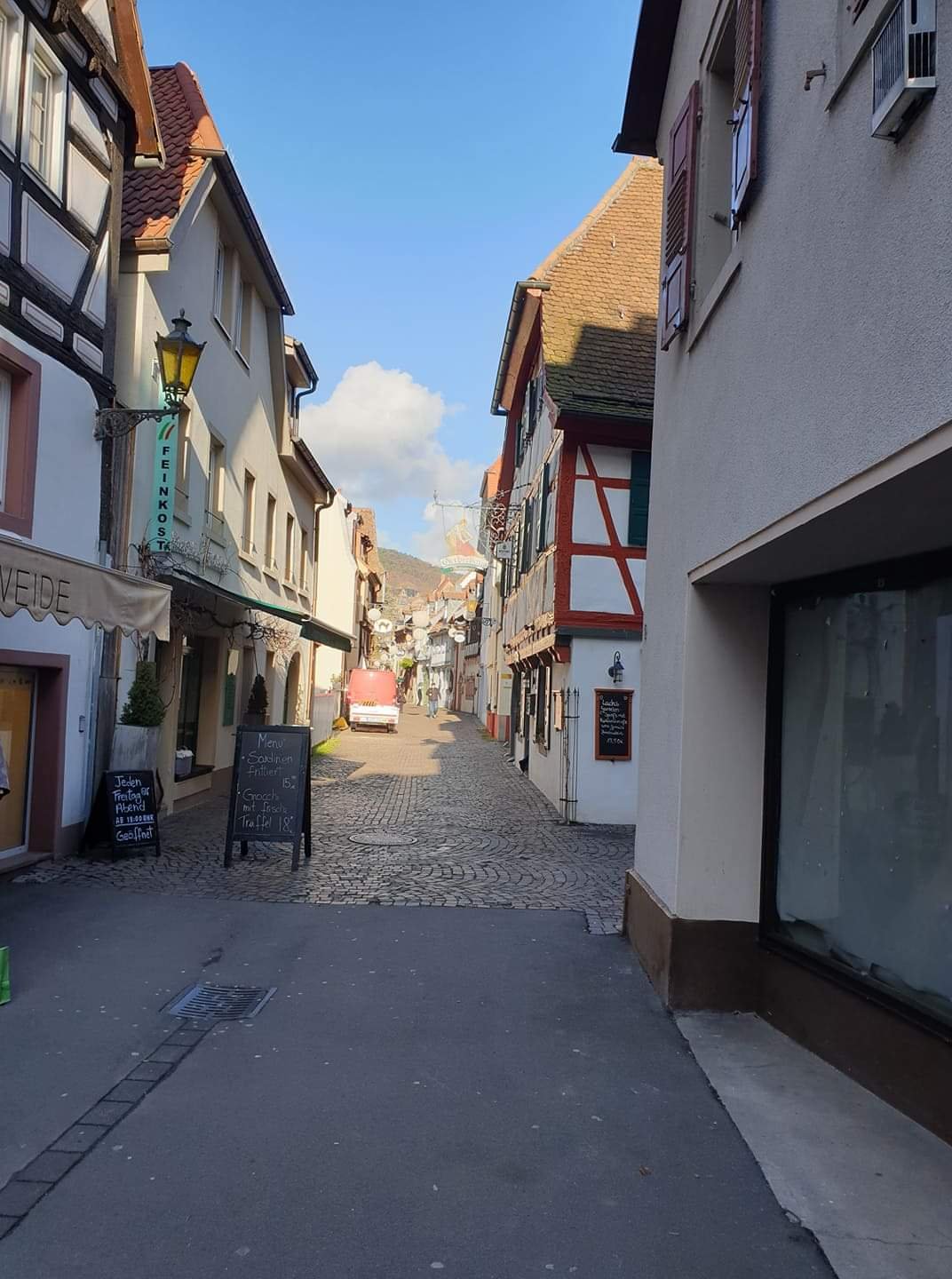 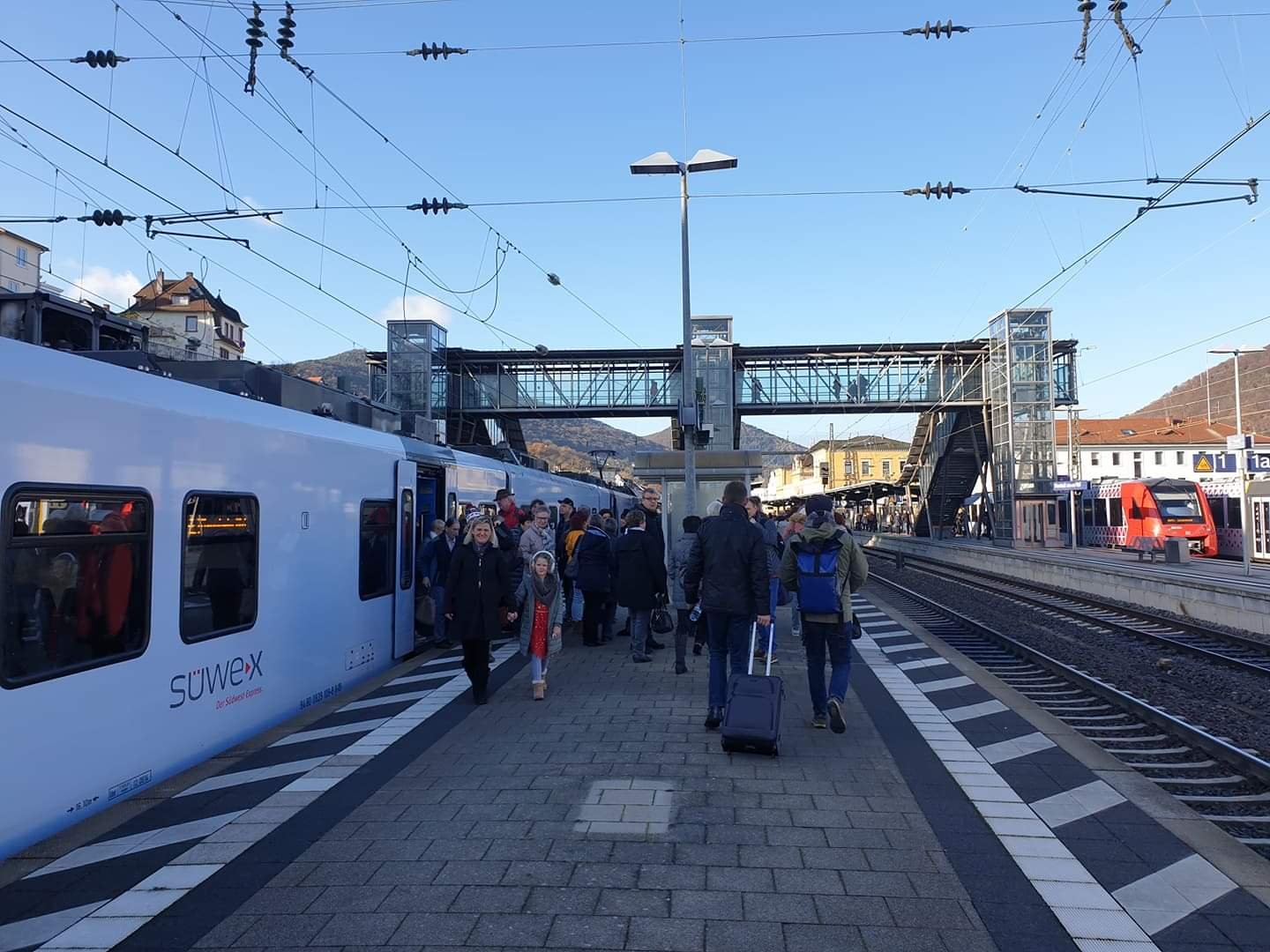 Luckily the train ride to Mannheim was much less crowded, so it was perfect for Nellie and I to quickly throw down some Thanksgiving leftovers before we arrived at 12:34pm. We probably spent more time navigating our way out of the Mannheim Hauptbahnhof than actually walking to the Christmas Market. 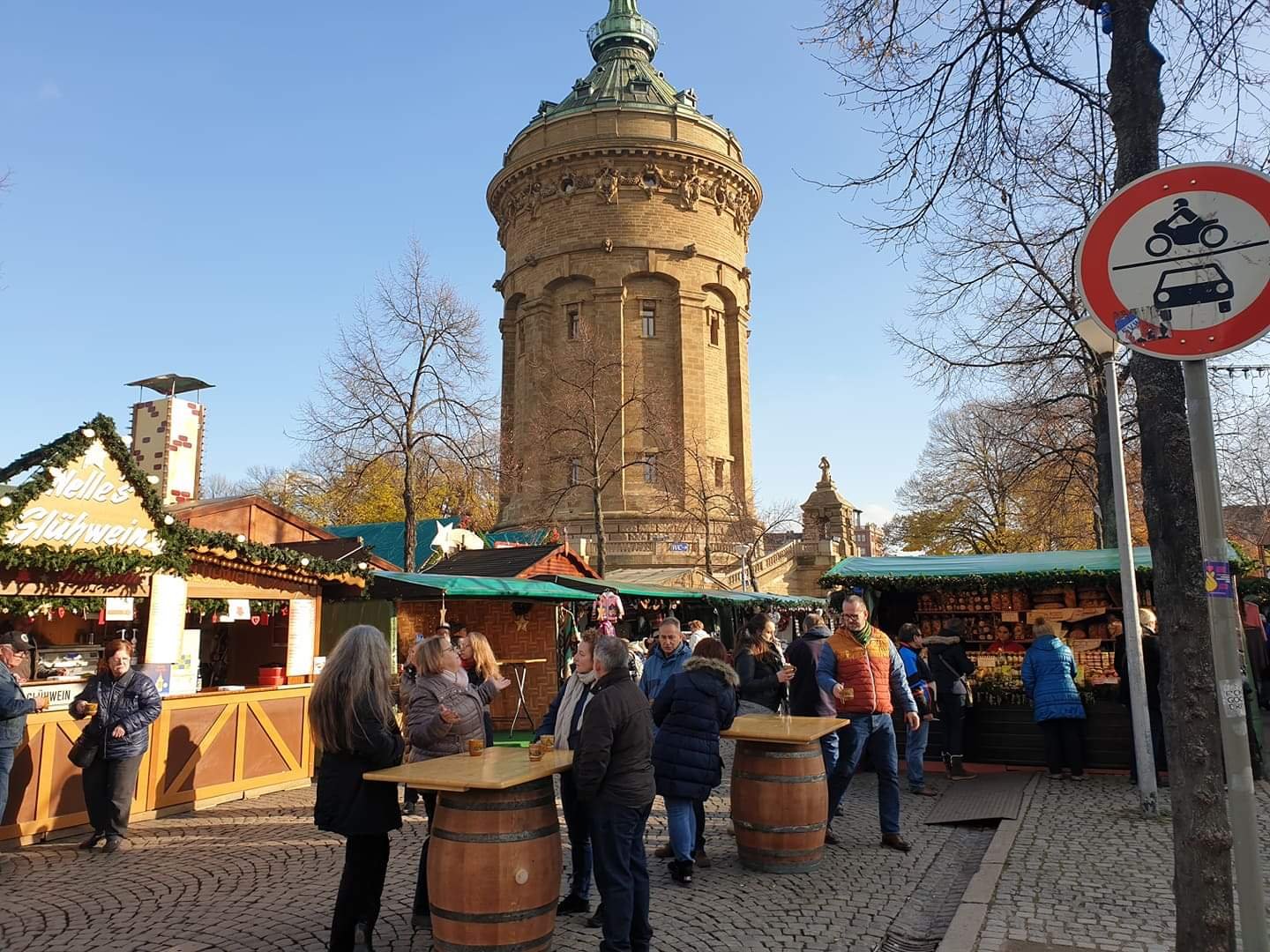 Compared to Neustadt, the Mannheim Christmas Market was much bigger and busier. We weren’t here long either, as we really only had enough time to make a lap around the Christmas Market, grab Glühwein, and buy a souvenir Christmas Market Santa mug (which is €3.50, by the way). The Christmas Market is centered on the city’s Wasserturm (water tower), and has lots of vendors to pick up trinkets, to include a large booth by the popular vendor Käthe Wohlfart. Probably the highlight for us here was taking a trip over to the Waffel Haus (ahhh, American nostalgia). 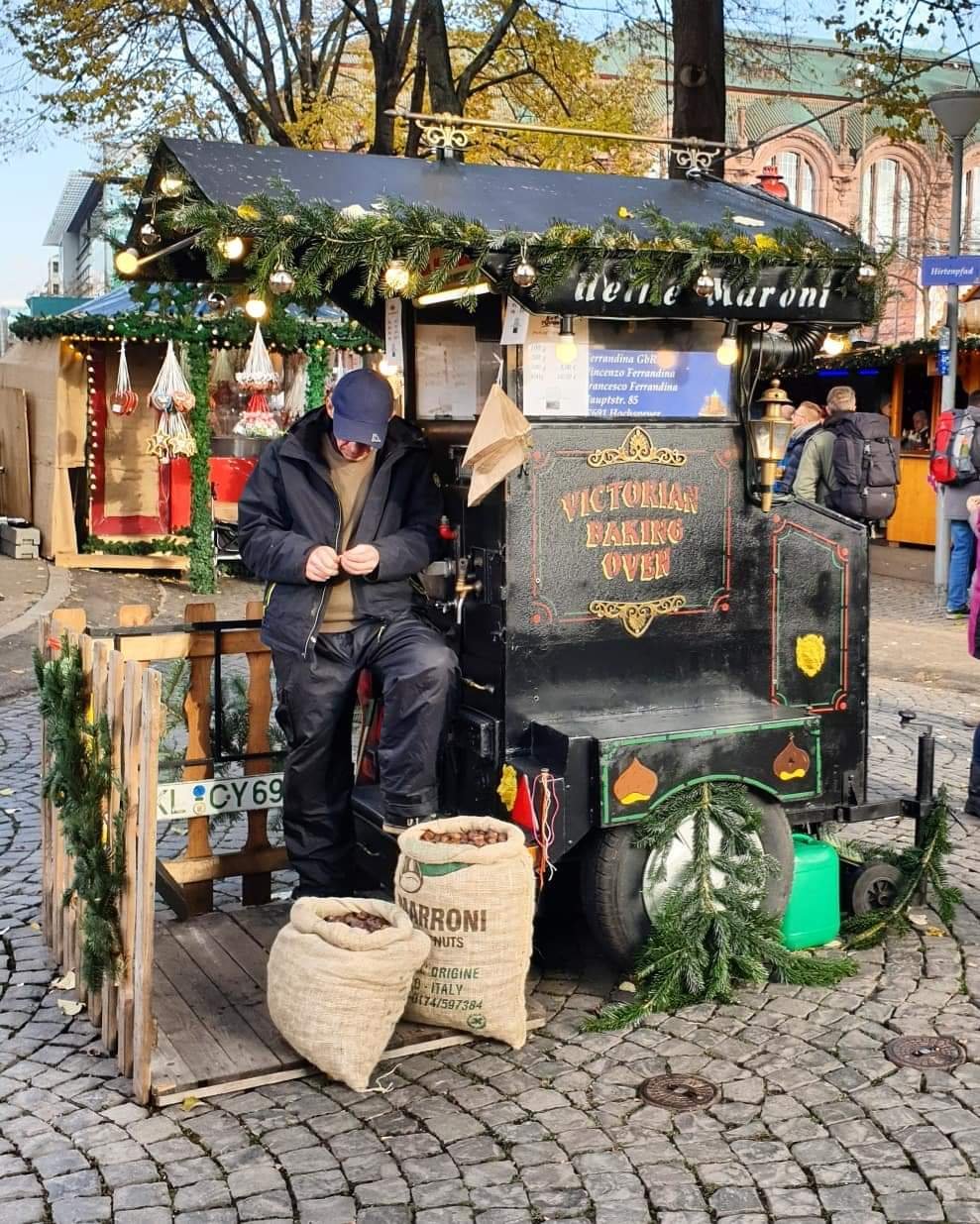 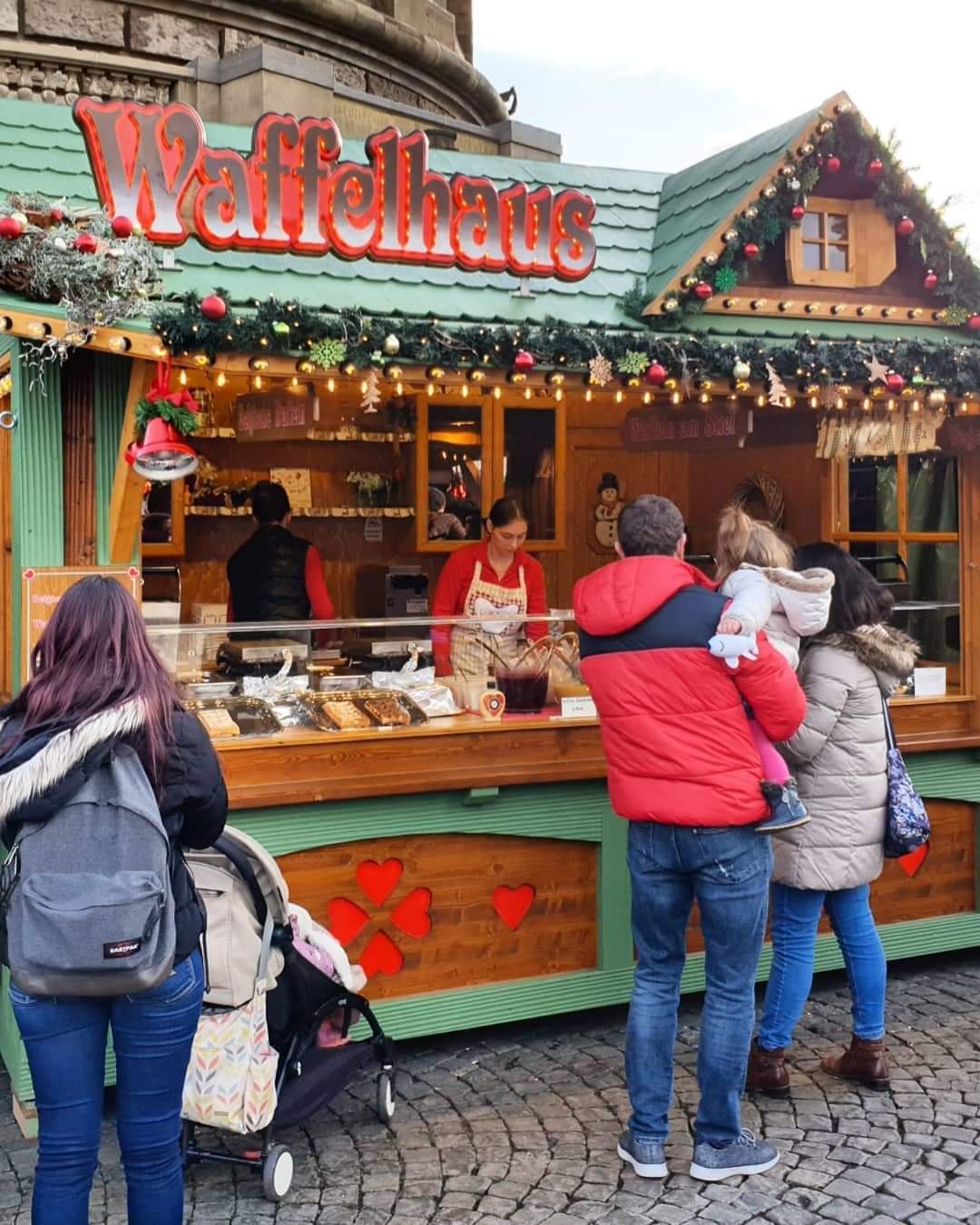 After our short stay in Mannheim, we made it back to the Hauptbahnhof to jump on the 1:39pm train to Worms. We arrived at Christmas Market #3, Worms, at 2:14pm and were pretty excited that we’d have two hours on ground here. Two hours was great, as this Christmas Market had plenty to see as it lined multiple streets throughout the city. We spent a little time grabbing crepes, pommes, chimney cake, and of course, Glühwein. 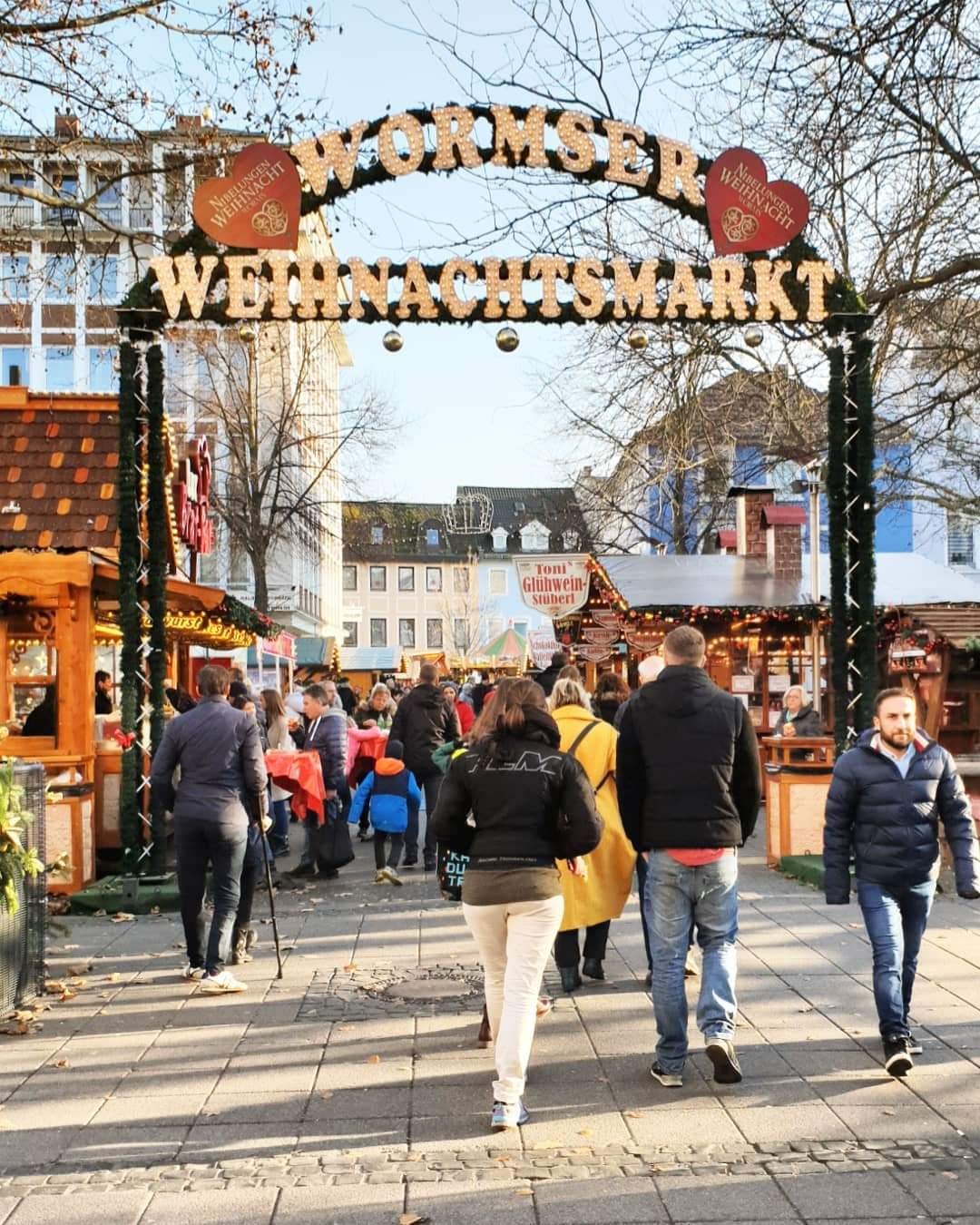 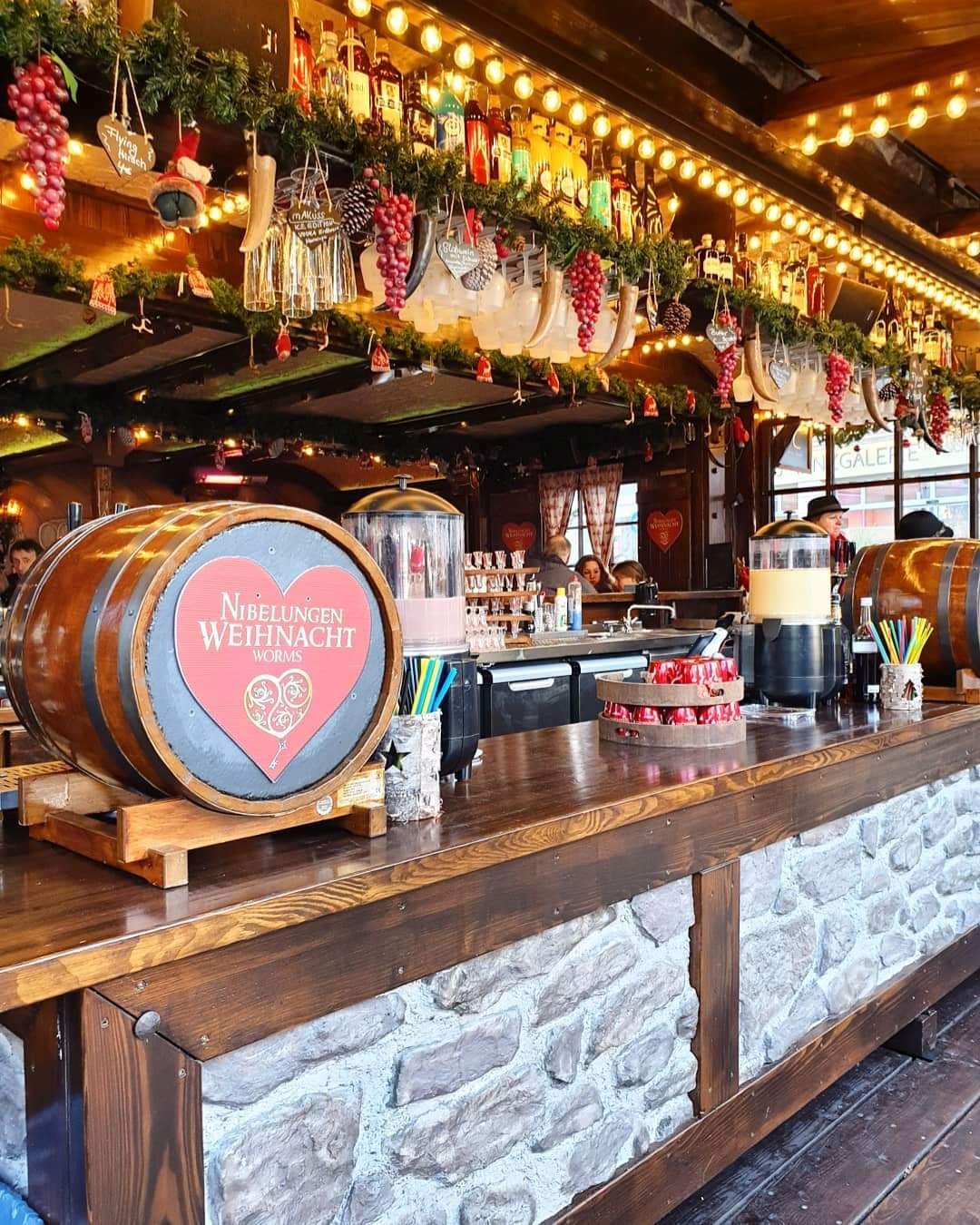 Since we were in Worms, Nellie and I couldn’t resist taking a trip over to the key Reformation sites to include the Magnuskirche, the Dom St. Peter, and the Luther Monument. Two hours was perfect to do all this, and we hopped on the 4:17pm train ride to Mainz. 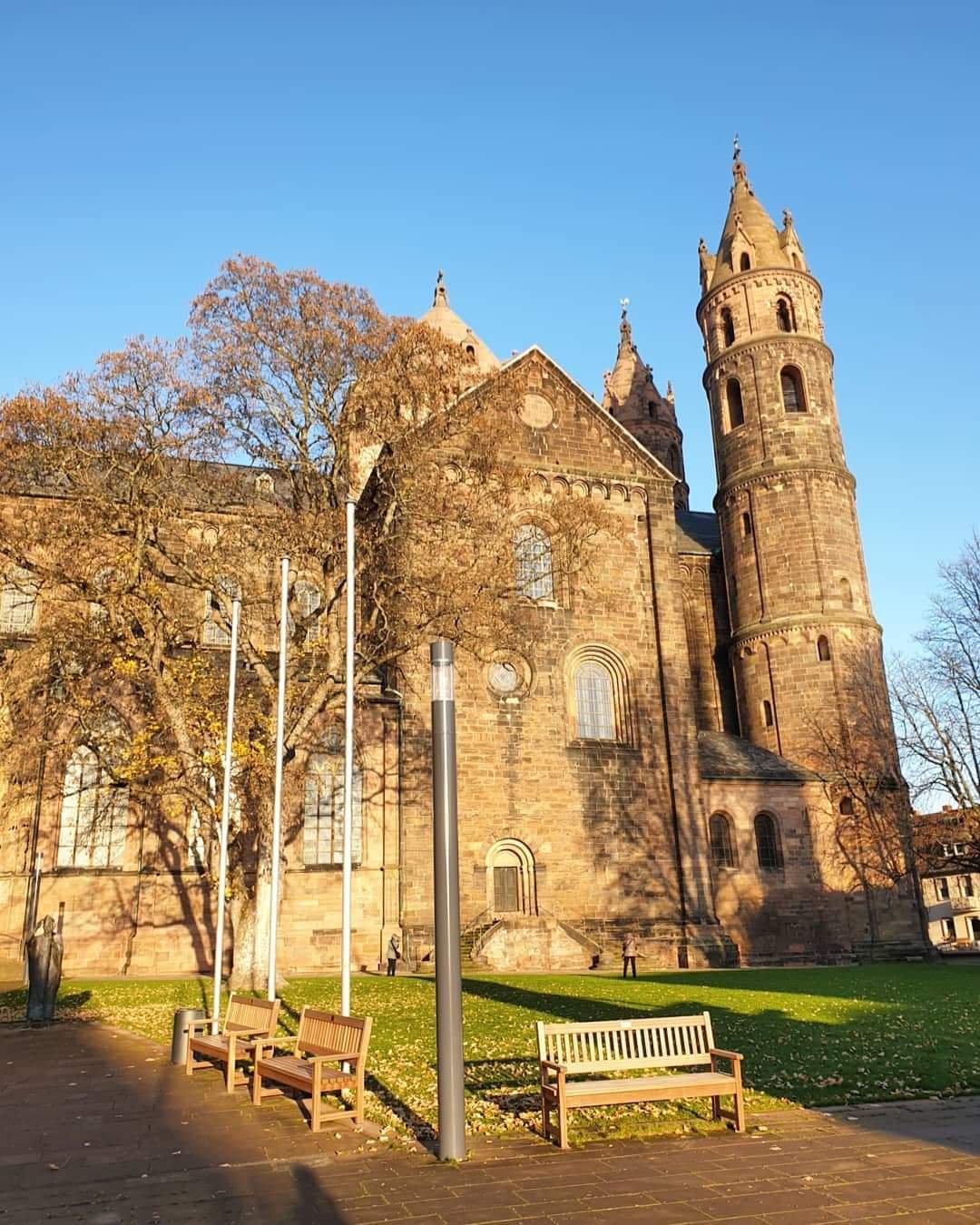 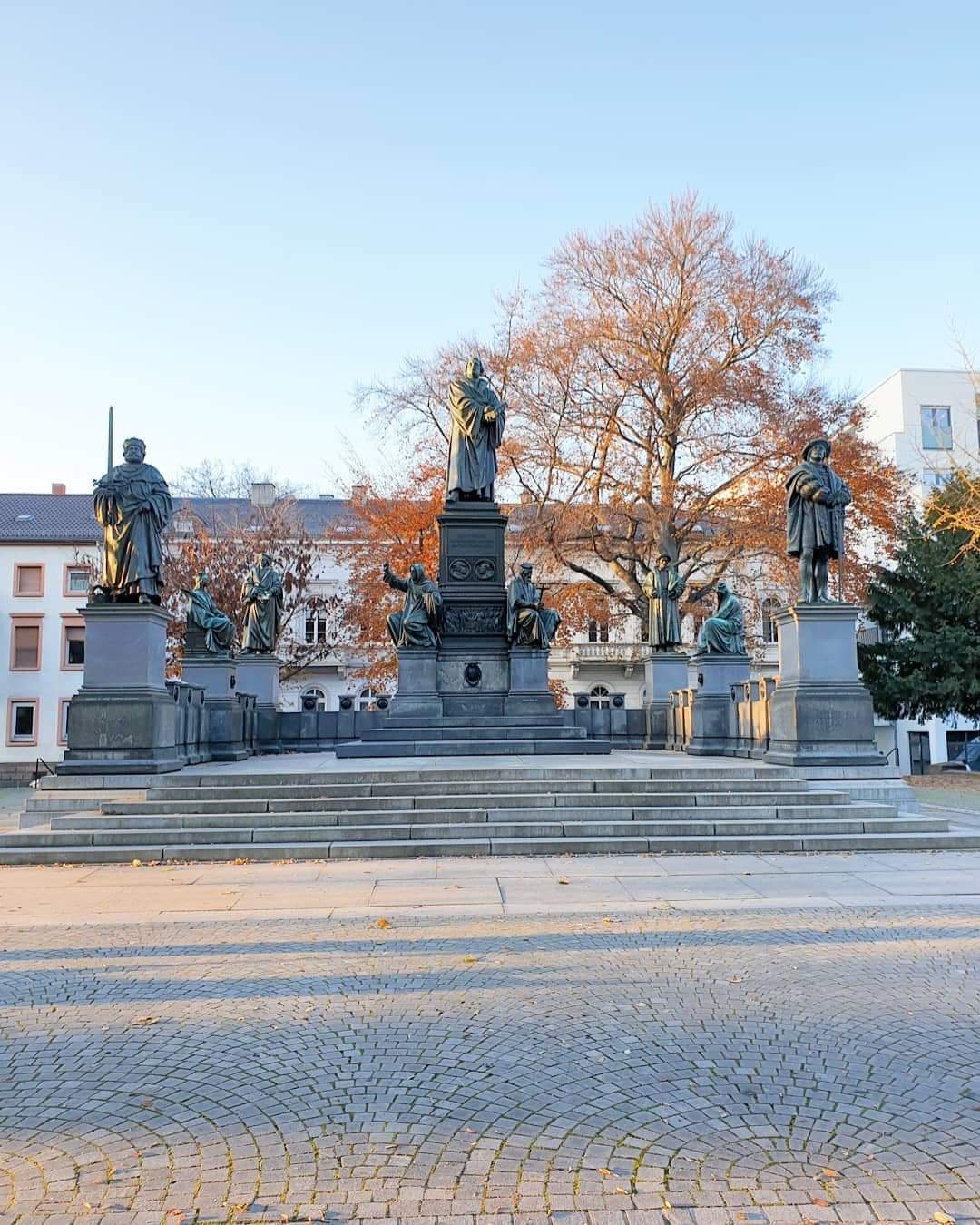 After a quick transfer in Biblis, we arrived at Christmas Market #4, Mainz, at 4:52pm, right when it was starting to get dark. Mainz is interesting, as we walked by two “Christmas Markets” before we made it to the main venue, located at the Domplatz. The walk to the Domplatz was about 15 minutes, but seemed like eternity in this crowded city. I almost suggested we just “check the block” at the small stand next to the Hauptbahnhof, but I also didn’t want to cheat the experience. 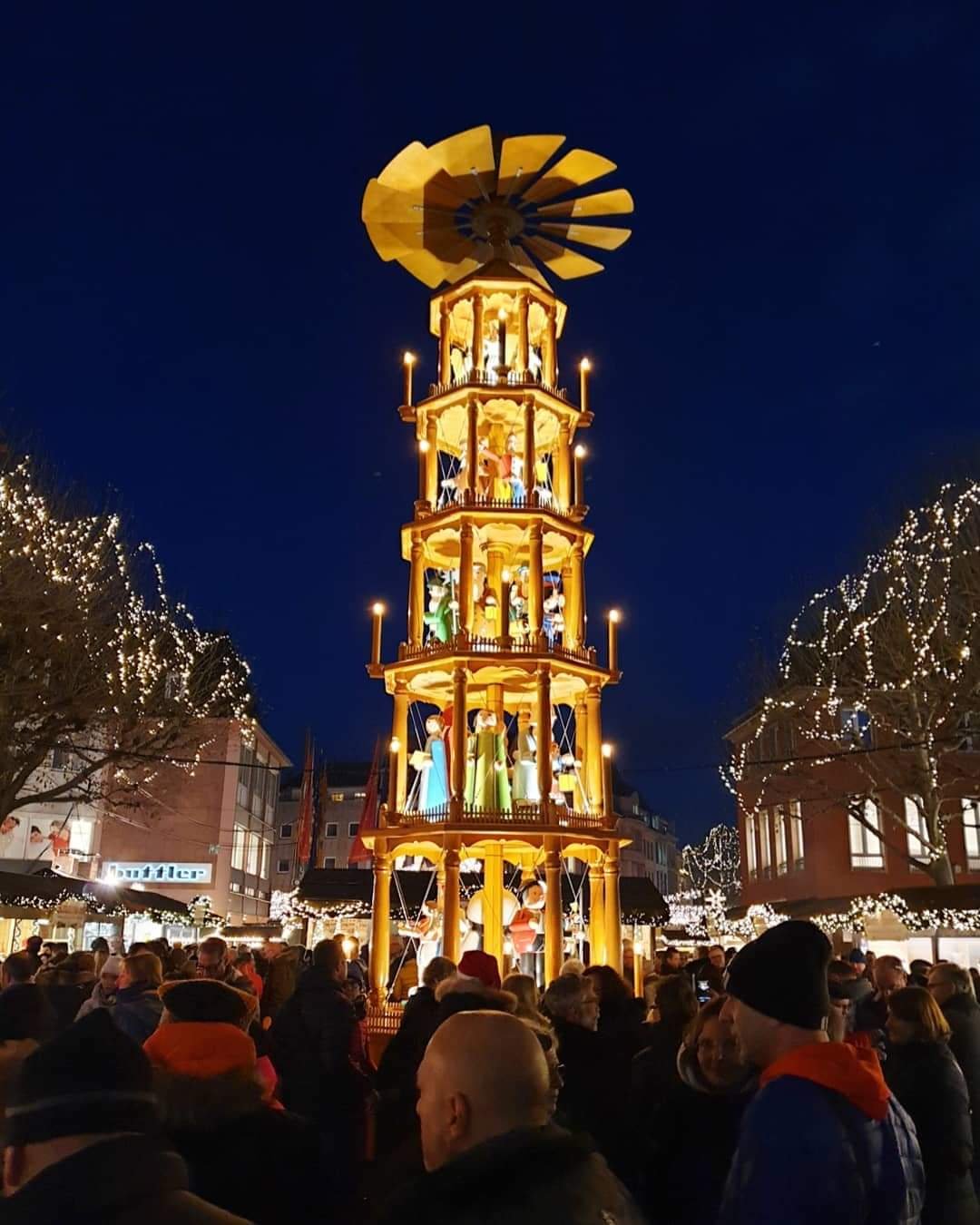 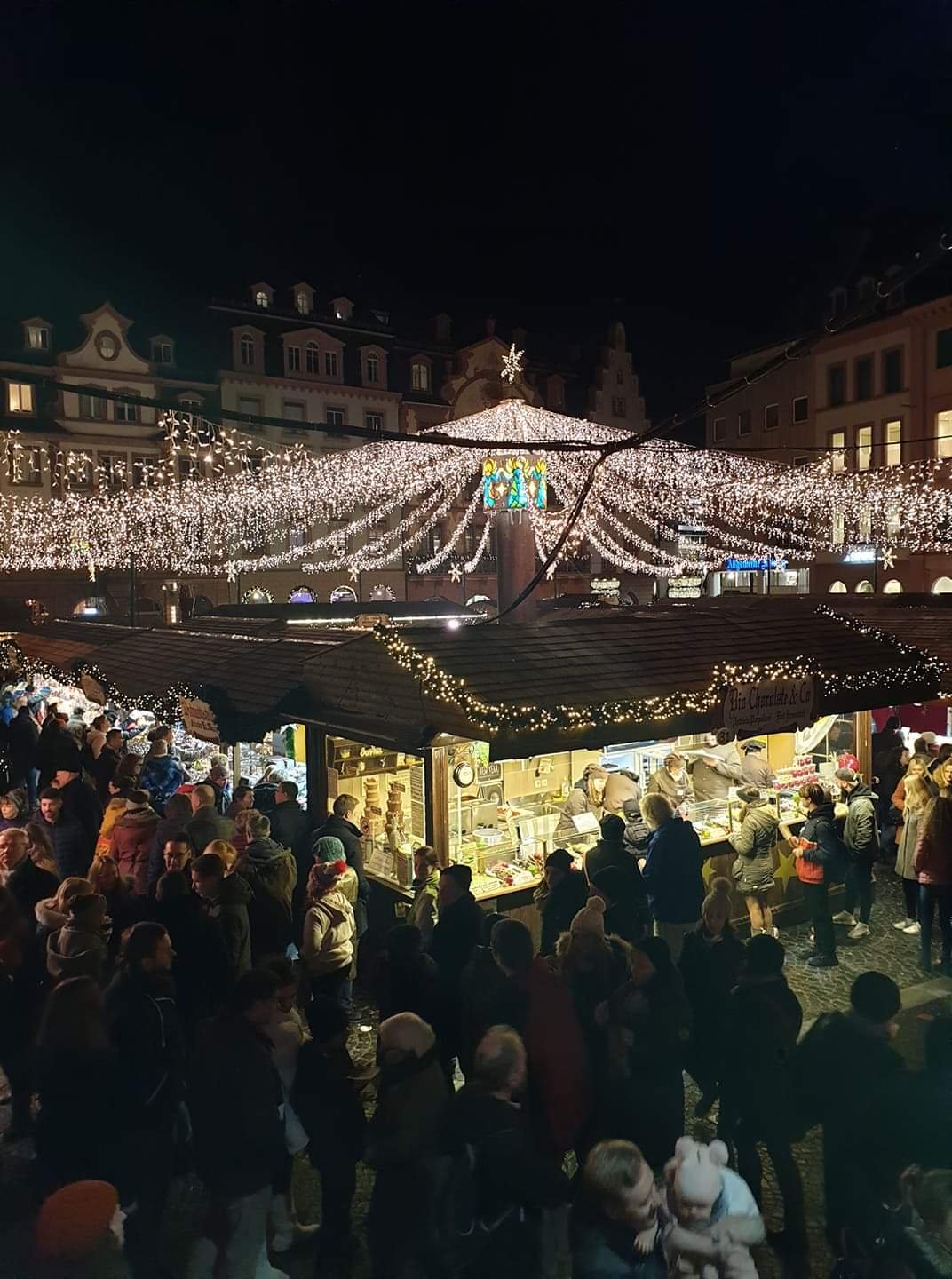 The Mainz Christmas Market was insanely crowded and almost too crowded to enjoy ourselves. Fortunately we met up with our friend Inez who lives locally, and she was helpful in navigating the market, including making sure we squeezed our way through to see the Nativity display. Considering our long walk back to the main train station, we were in Mainz only long enough to grab a few cups of Glühwein with Inez, and probably the world’s best Schnitzel at one of the booths. We scurried back to the train station to catch the 6:27pm train to Bad Kreuznach. 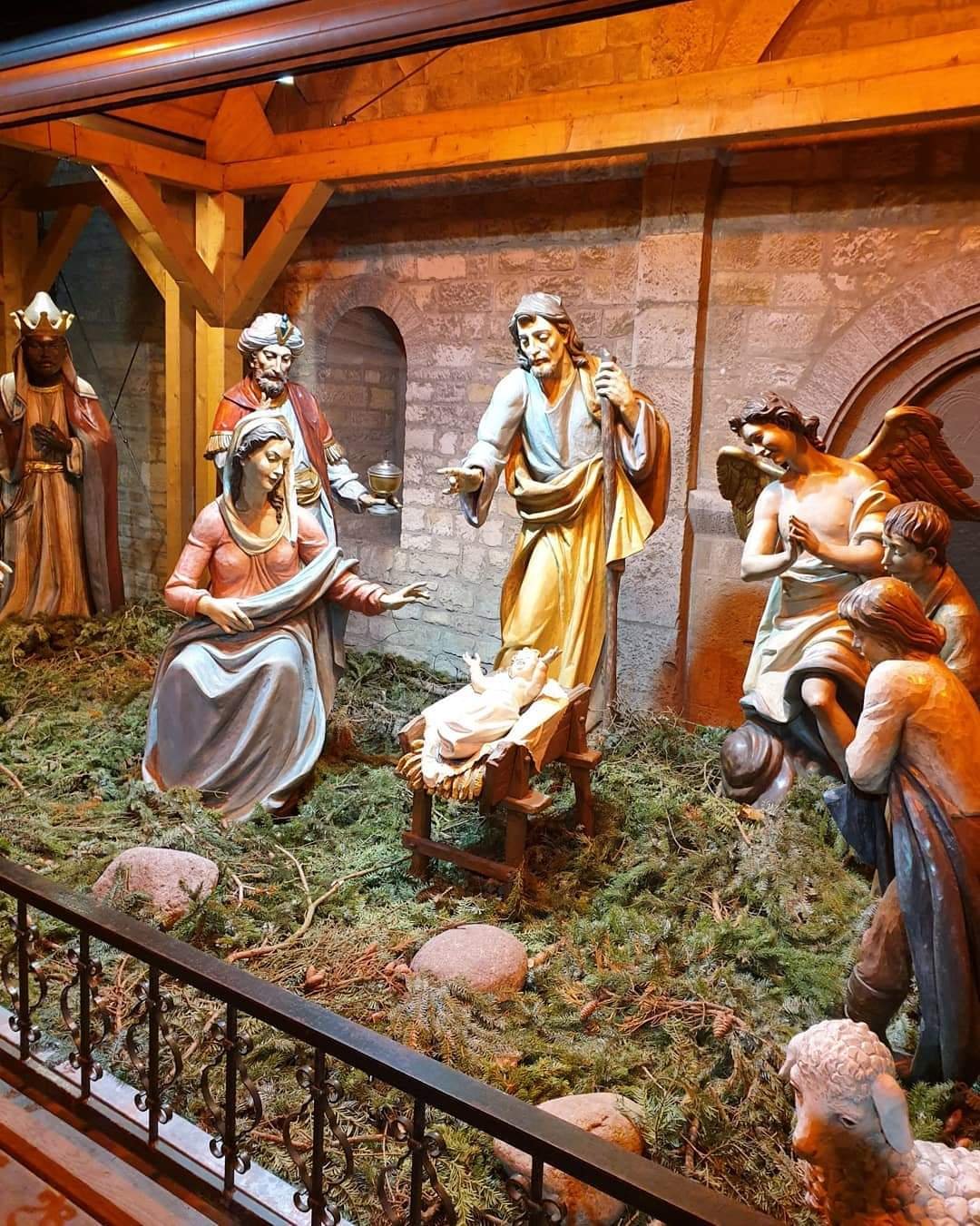 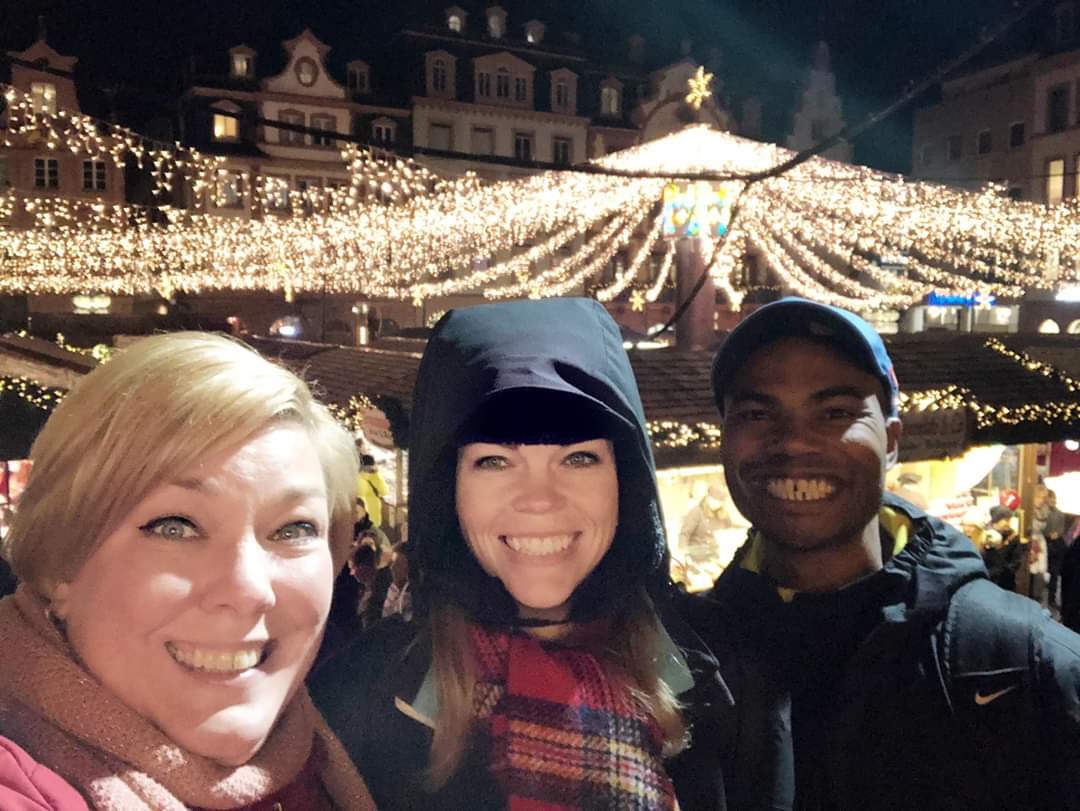 As crowded as Mainz was, three of our day tripper friends missed the train to Bad Kreuznach. As a partial group, we arrived to the final Christmas Market, Bad Kreuznach, at 7:00pm. Our three stragglers were able to jump on a 7pm departure from Mainz, and joined us in Bad Kreuznach thirty minutes later. 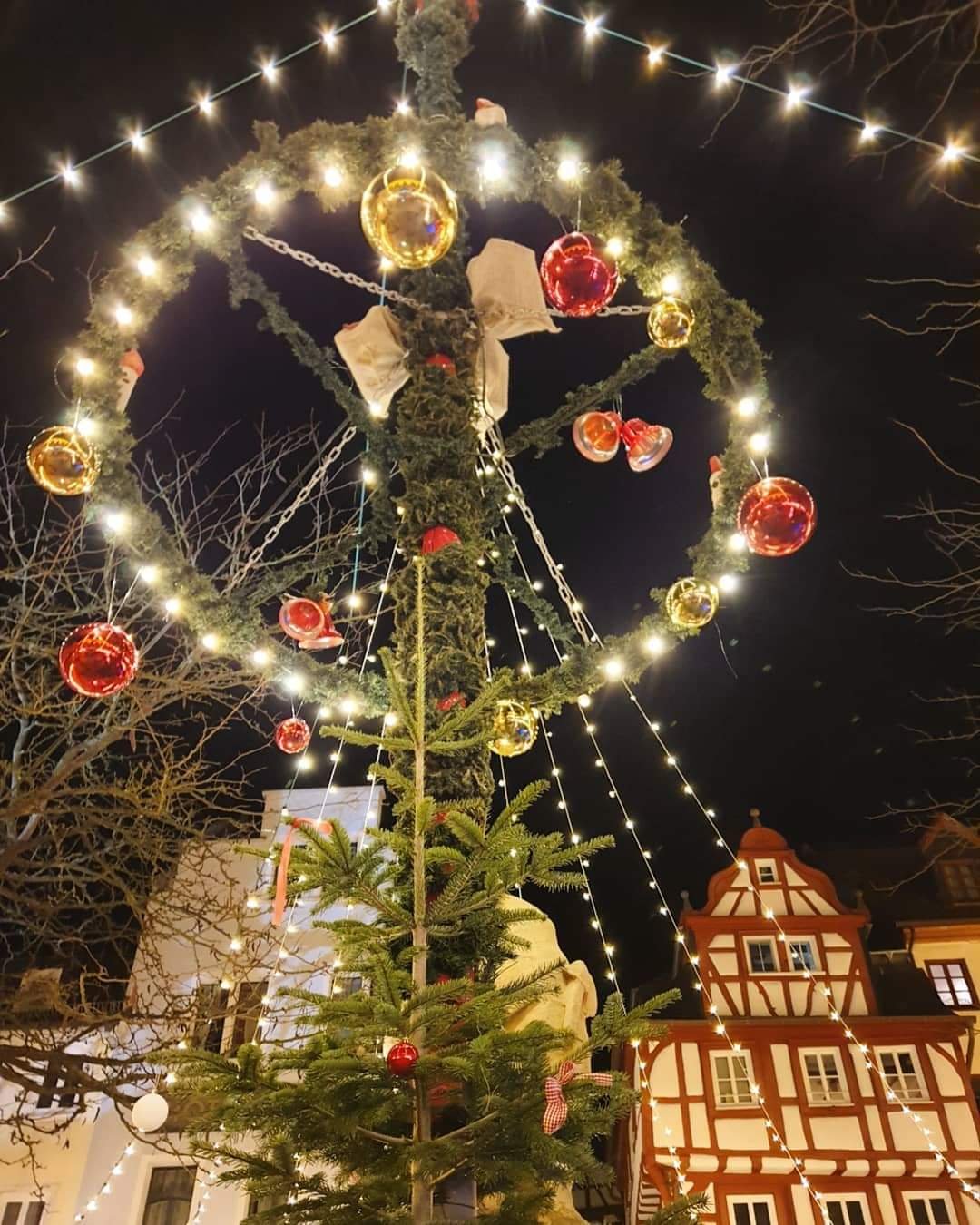 By this time, we felt pretty accomplished, but mixed with feelings of weariness and exhaustion. Not to mention, we were pretty darn cold by this point. Nevertheless, the Bad Kreuznach Christmas Market is another we probably would have enjoyed more if we had more time, and if we came earlier in the day.
Also a charming and cozy market, this Christmas Market featured large wine barrels to sit in to eat and drink. We caught the market while they had live choir, which was nice as we they sang many holiday songs we are familiar with. 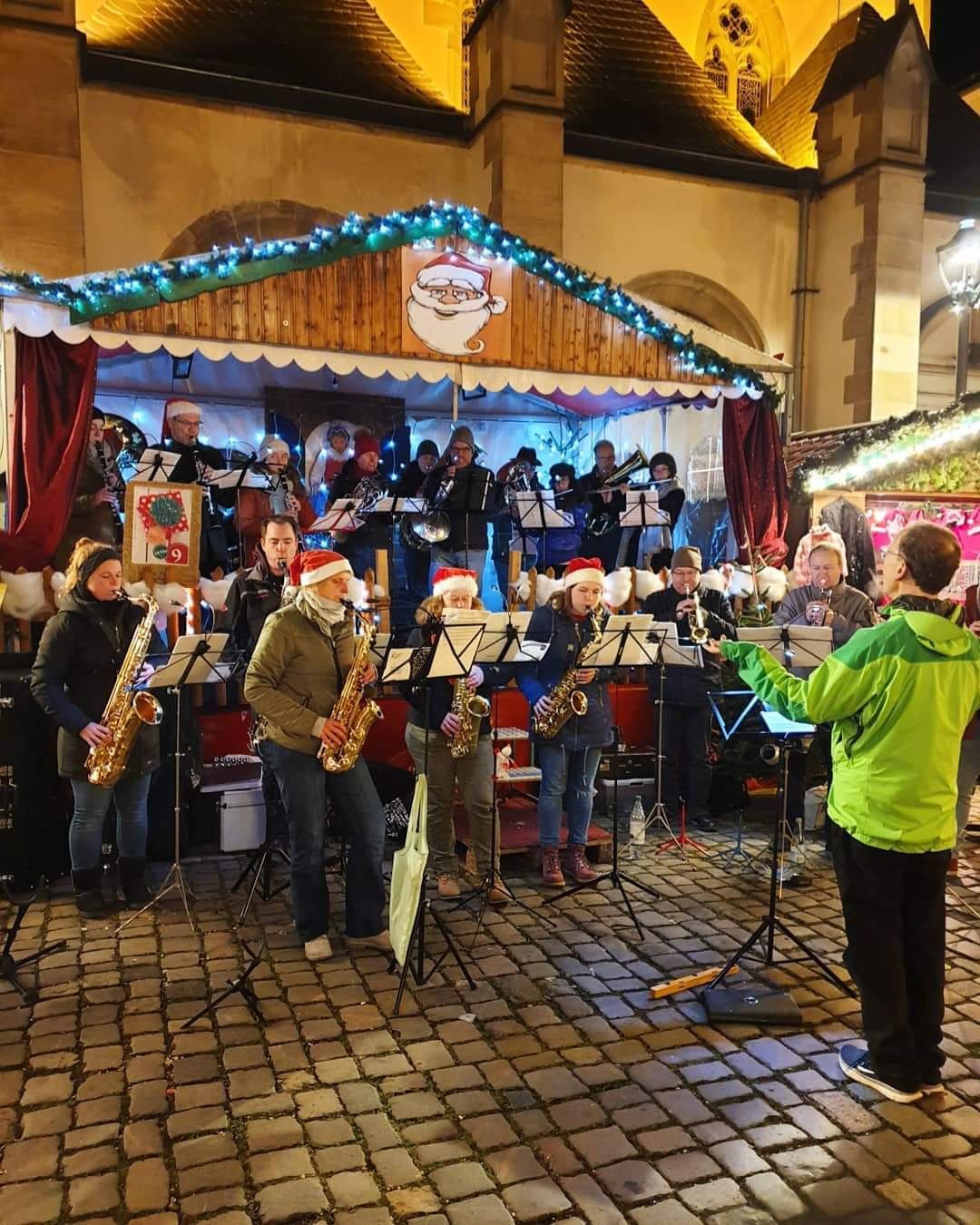 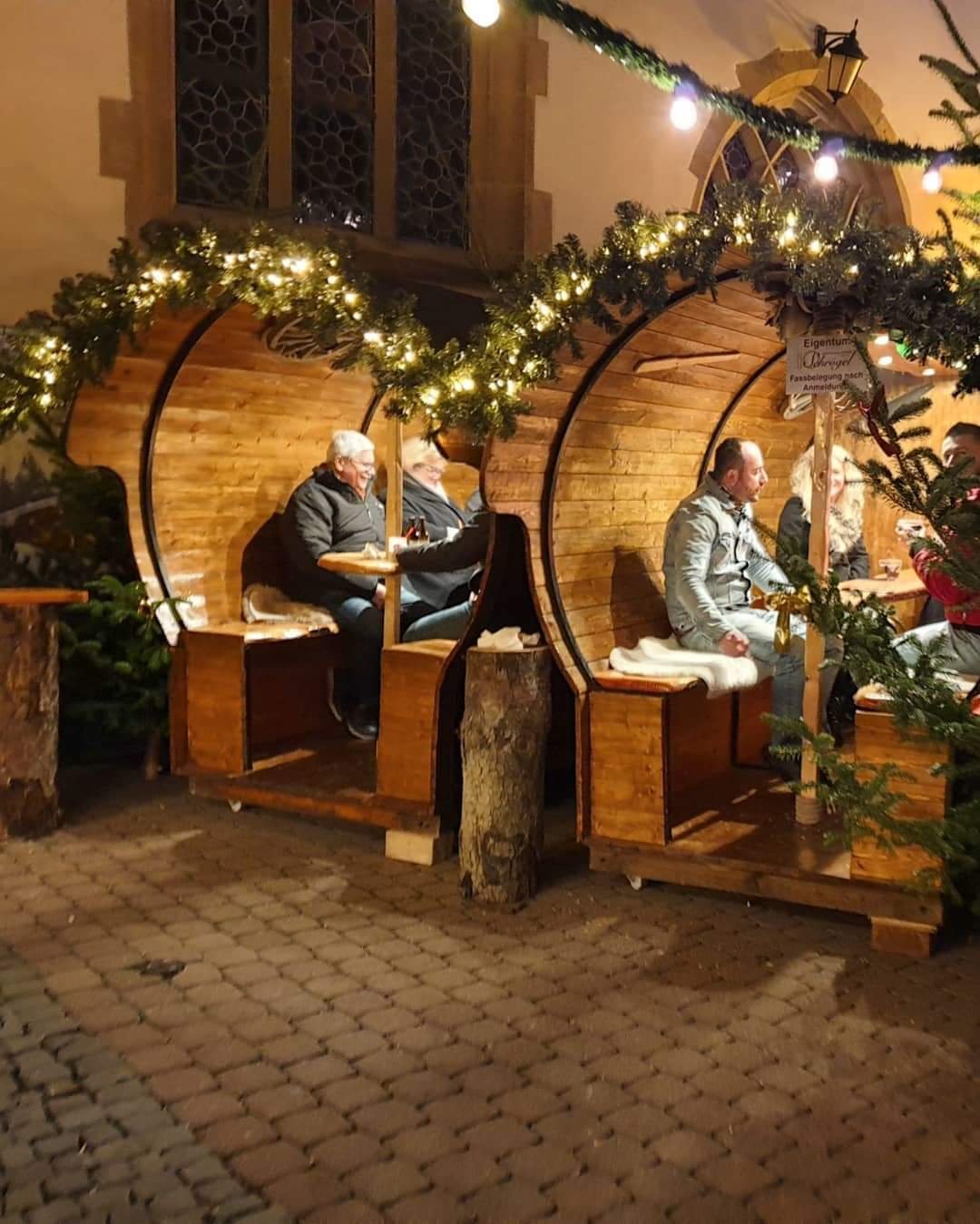 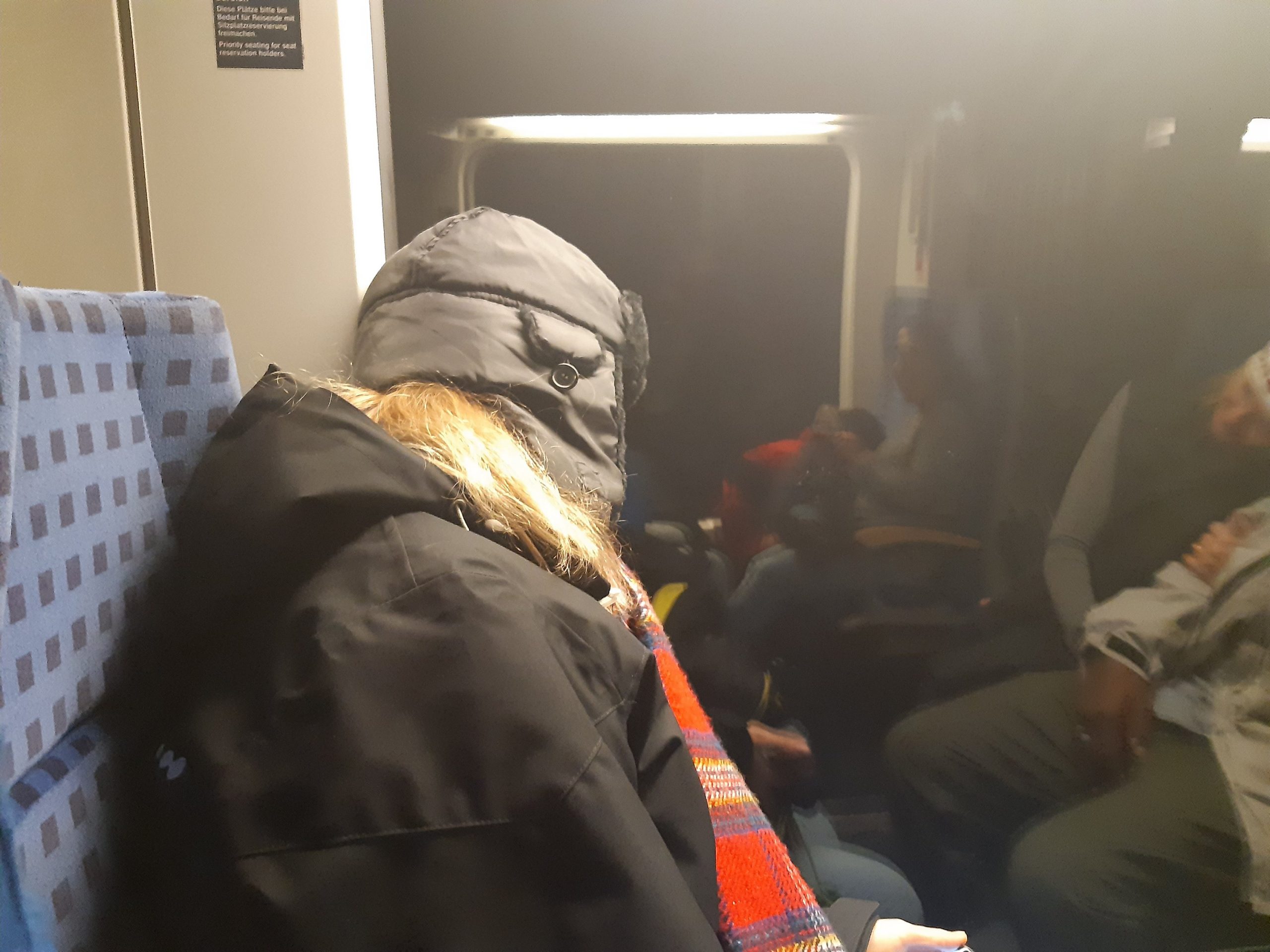 Sweet Nellie was wiped out. 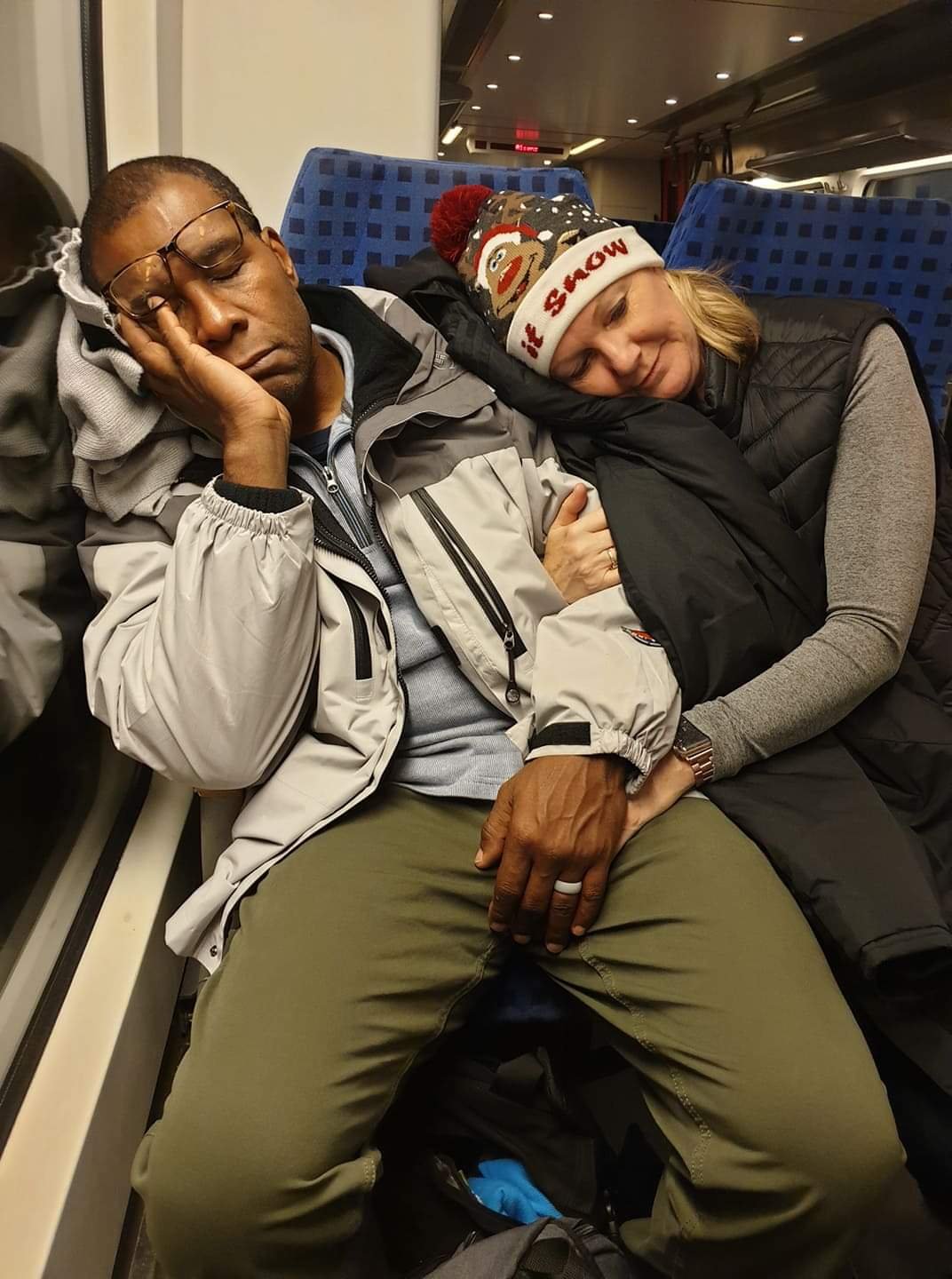 So were Jungle George and the Aussie.
There you have it, that’s how Nellie and I (& friends) saw five Christmas Markets in a single day by train. The trip was enjoyable because of great holiday season weather, great friends, and trains that arrived on time. Any snag could have thrown our trip into frenzy, but we were fortunate to have a relatively smooth journey.

The thing I liked about this trip is that it was like a Christmas Market sampler, and we saw markets that you don’t see people raving about in the local Facebook groups. For example, Neustadt an der Weinstraße and Bad Kreuznach were adorable markets that no one ever talks about. It was a great opportunity to see Christmas Markets that I would have otherwise skipped over for the big ones like Trier and Strasbourg. 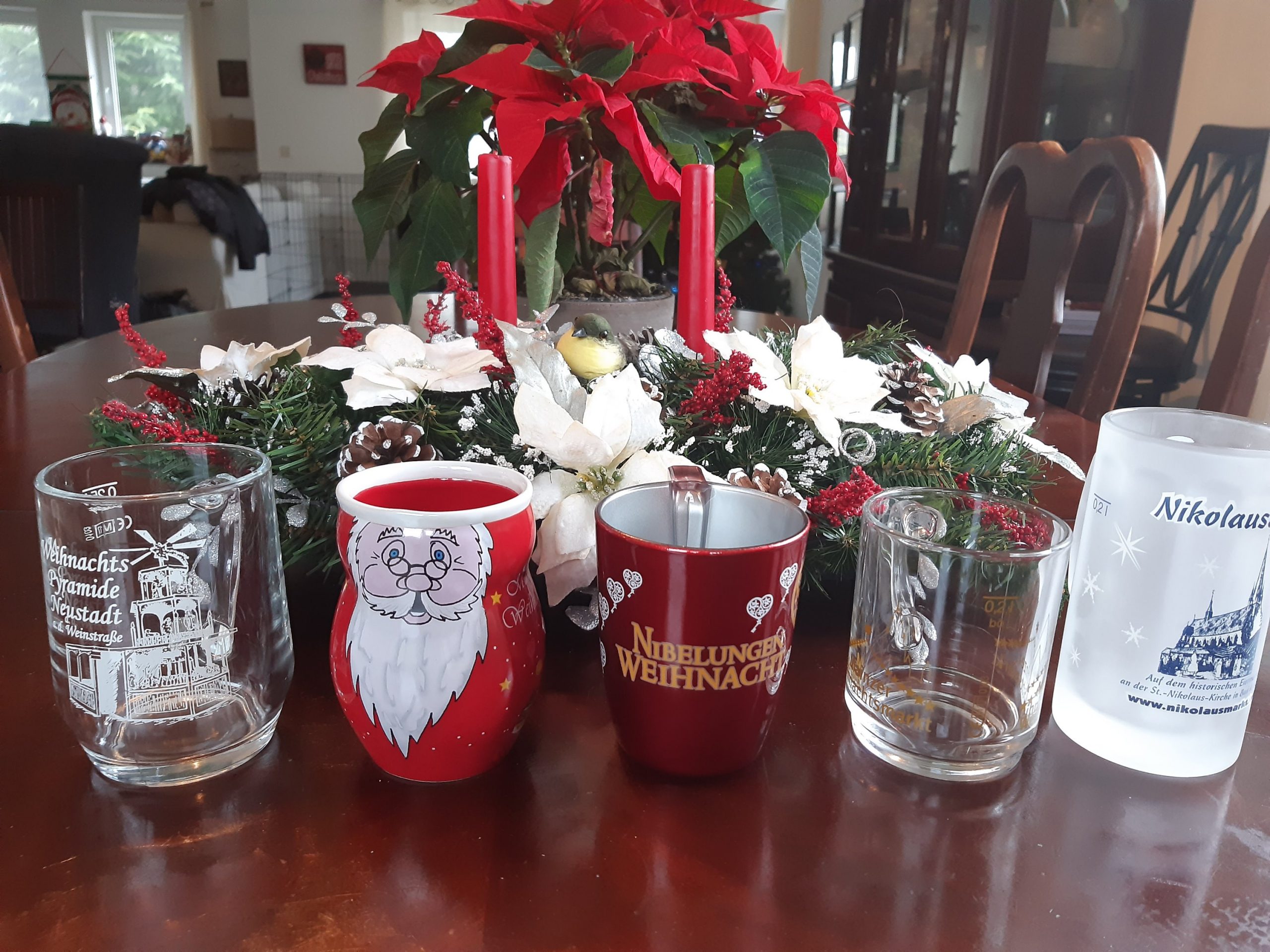